The Gulf Coast has been inundated with federal and state officials, including President Obama, in the last week following the April 20 catastrophic explosion of the Transocean/Deepwater Horizon well platform. Administration officials claim that they have been "forward leaning" in their response to stop the flow of oil, hold British Petroleum responsible for containment and cleanup, and protect the sensitive coastline and fisheries. This is all good, but is total and absolute transparency the order of the day? Or, are public relations and "spin" serving to pull the wool over the eyes of a confused public?

Official statements still refer to a "leak" and a "spill," when the reality is that at least 210,000 gallons of BP's crude oil is rushing into the Gulf of Mexico daily, and nearly 3 million gallons have entered the marine ecosystem of the Gulf. This is a river of oil and should be called what it is.

Let's take a look at today's press release from the Deepwater Horizon Incident Joint Information Center in Roberts, Louisiana and see how it stacks up against ground reports from national media, watchdog groups, and local residents.

It was not until today that officials confirmed that oil was found on the beach at Chandeleur Islands.

....a small group of uninhabited barrier islands off the northeast of the Mississippi Delta. The Chandeleur Islands are part of the Breton National Wildlife Refuge.

"Uninhabited" is a loaded word. In fact, the Chandeleur Islands are a critical component of the Gulf ecosystem. First and foremost, they are a barrier island chain and provide protection from wave action caused by hurricanes and other storms. The marshes also serve as nature's filtration system. This barrier chain was already in dire condition due to irresponsible dredging and canal construction by oil companies before Hurricane Katrina hit in 2005. As a part of the supposedly federally protected Breton National Wildlife Refuge, they offer protected waters for immature marine life as well as a prime migrating point for birds.

"Uninhabited" may be true, but it is not an accurate description of what these barrier islands mean in terms of ecological importance.

On Monday, ABC News had filed a video report that clearly showed oil clinging to the marsh grasses on the Birdsfoot Delta.

Three days of press conferences since Monday, and officials continued to deny that oil had entered the sensitive marshes. Until today, when the truth could no longer be denied.

Flying on, we went to find the oil. Unfortunately, compared with our flights from last week, we didn't have to go nearly as far to see the sheen and the slick. 'Slick' is a misnomer, as the interaction of this crude with the wave action of the Gulf creates a reddish brown 'mousse' on the surface. We spotted the mousse on both the inside and the outside of the Chandeleur Islands, the barrier islands separating the Gulf from the Lake Pontchartrain Basin and the marsh of lower St. Bernard Parish. There were no booms in place to protect the Chandeleurs. Eventually, we spotted an area of the island chain that had been hit, with the reddish mousse clearly apparent on the white sand beach of the island. Our photographer also spotted an associated fish kill in the vicinity. We weren't the only ones searching for the oil, we caught pilot conversations about Coast Guard cutters on the search to clean up, as well as a plane carrying Interior Secretary Ken Salazar out observing the event.

Here is more from the "unified command."

Secretary Salazar visited the Mobile Command Center in Mobile, Ala., to observe response efforts and talk with responders about ongoing operations and mitigation plans. He also met with BP Officials at their command center in Houston to get an update on BP's efforts to close down their leaks.

The ubiquitous word "leaks" is used again. But what about boom deployment in Biloxi? We have been hearing all week, and observed with our own eyes on Friday of last week, that many booms were failing, either over washed by wave action, or broken apart.

Here is the report from the Gulf Coast Restoration Network:

Weather finally permitted another monitoring flight with Southwings, so yesterday morning pilot Tom Hutchings, photographer Matthew White and I took off from Biloxi to check on the containment efforts in the marshes, as well as see if any of the barrier islands or coastal wetlands had been hit with BP's oil.

We checked out areas of the Biloxi Marsh, to see if the planned boom deployment had actually happened. We certainly noted some boom out, but unfortunately, roughly 1/4 of the boom had broken, and it seemed clear that the strategy of closing inlets and bayous to keep interior marsh and ponds clear of oil would fail if the oil entered the area. We didn't see any of the 'vessels of opportunity' deploying or maintaining the booms in the area unfortunately.


Favorable weather conditions allowed responders to conduct a successful controlled burn operation for the second consecutive day. As part of a coordinated response that combines tactics deployed above water, below water, offshore, and close to coastal areas, controlled burns efficiently remove oil from the open water in an effort to protect shoreline and wildlife.

How much oil was burned? Statistics are lacking. A controlled burn over the weekend resulted in a few hundred gallons of oil burned. Here is yesterday's official photo. 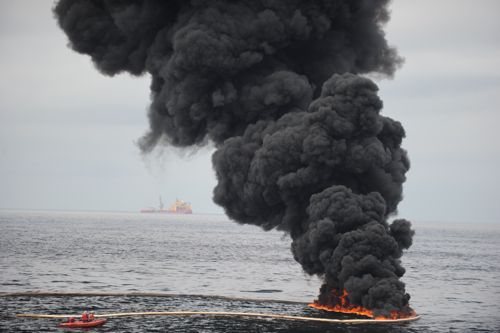 Questions also remain unanswered about turtle deaths, since necropsies have been closed to the public.

However, the New Orleans Times Picayune and NPR are standing by the official press release from "joint command" that turtles are not dying from the river of oil, citing necropsies from which the public is banned. Are the results public, or not? Let's see the results.

We need some critical thinking here, but it has been cancelled from most college curriculums and apparently from most mainstream newsrooms.

253,000 gallons of dispersant have been deployed, and British Petroleum says that more than 317,000 gallons are available. The question of toxicity has not been answered, and until BP releases the exact organic/sulfonic acid salt compound, one cannot independently confirm the safety of the dispersant.

In a perfect world, the oil will settle on the seabed, be ingested by microscopic organisms, and become part of the food chain. We are at the top of that chain. One would think the FDA would aggressively explore this issue and not worry about the amount of salt in America's diet.

In a vague statement today, "joint command" said, "The Center for Disease Control and Prevention (CDC), the National Center for Environmental Health, and the Agency for Toxic Substances and Disease Registry are monitoring the gulf oil spill and offering assistance as needed to lead federal agencies and impacted states and communities."

One would hope so.

A NOAA-sponsored ocean mission, originally set to explore for deep-sea corals, has been redirected to collect seafloor and water column data from areas near the Gulf of Mexico oil spill source.

The samples are expected to provide important information about the abundance of marine organisms and the presence of chemicals in ocean water and sediments--information for a baseline against which to measure change if those areas are affected by sinking oil.

Baseline? The river of oil began to flow on April 20. It is a little late to "measure changes," since there is no baseline, but it sounds like a good line in a public relations-driven press release. 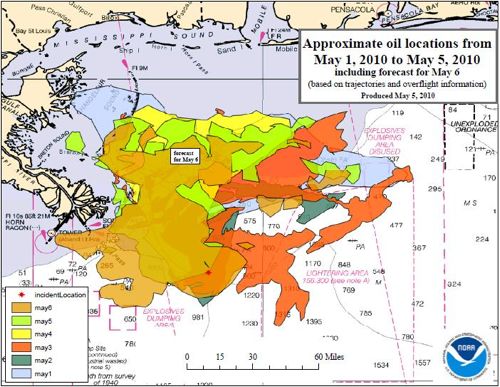 The latest NOAA predictions show that the river of oil may move west of the Mississippi outlet and this could be very bad news for the fishing industry if this area is closed as a result.

Rear Admiral Mary Landry of the Coast Guard has promised transparency. The Coast Guard worked miracles in New Orleans after Katrina. Now that Homeland Security is "in charge" will the truth be a secondary casualty of this disaster?

Joint Command still has an opportunity to be concise, clear and forthright in the future release of information. An update came in minutes ago, Thursday evening, saying that an "incident command center" has been officially opened for the Florida west coast.

ST. PETERSBURG, Fla. - In response to the possibility of the Deepwater Horizon oil spill affecting the West Coast of Florida, representatives from BP, the U.S. Coast Guard, and the Florida Department of Environmental Protection (DEP), along with several federal, state and local agencies have officially established the incident command post.

"The oil remains many miles away from the Florida shoreline and there is no immediate impact area of concern near the west coast of Florida," said Keith Seilhan, St. Petersburg Incident Commander for BP. "We are working with the State of Florida, U.S. Coast Guard and other federal, state and local agencies to prepare, plan and take responsibility if anything should impact Florida's west coast."

Let's begin by dropping the word "incident." If PR does not allow the word "catastrophe," how about using the term "environmental disaster?"