At a loss for inspiring rhetoric, at the end of a long day on the campaign trail, Mitt Romney burst into a version of "America the Beautiful" at a Florida seniors community in January 2012. Even in the most desperate of circumstances, the song still delivers. No matter what divides us as a country, the American landscape still has the potential to inspire us, connect us, and (literally) hold us together. This same passion for the American landscape is what drove the idea of the book "Petrochemical America," [Aperture, $80.00] a visual investigation into America's energy landscape. Our study into the human and environmental impacts of petrochemical production reveals a disturbing and imminent truth: the American landscape is not as beautiful as we dream. As we approach the presidential election, it's clear that the myth of what the American landscape once was- a vision of purple mountains, amber waves of grain, and wilderness that was originally penned as a poem in 1893 - has gotten in the way of fresh, new thinking and about energy and about the cultural and ecological reality of the landscape we have actually made and that we will pass on to our grandchildren.

Just as 'America the Beautiful' was gaining popularity back at the turn of the century, a well at the Spindletop salt dome in Texas struck oil, ushering in a frenzy of production. At first ragtag and disparate, early oil entrepreneurs consolidated into Standard Oil, one of the world's first modern corporations. After the Supreme Court ruled in 1911 that Standard Oil violated antitrust laws, the company was broken up. Its successors slowly re-concentrated into today's global "big oil" corporations, which rival the GDP and political power of nation-states - including the United States itself. According to the NY Times, with nearly two months before Election Day on Nov. 6, estimated spending on television ads promoting coal and more oil and gas drilling or criticizing clean energy has exceeded $153 million this year while Candidate Romney raised $7 million in one day on a recent visit to Texas oil country. Reportedly, the three largest oil companies in the United States made a combined profit of more than $80 billion last year, or $200 million a day, making the President Obama's quest to end the $4 billion in tax subsidy for oil and gas companies, and shifting that taxpayer funded subsidy into further development of renewables, while deeply important to the future of this country, like chump change.

The roughly 100 years since Spindletop have seen a radical remaking of the American territory into a land of wide asphalt roads, vast monocultures of corn and soy crops at the country's interior that soak up fossil fuel based fertilizer and pesticides, and sprawling city-suburbs. Dwellings are becoming more and more separate, bigger, farther apart, and filled with more stuff, turning the landscape into a machine for consuming fossil fuels as we drive back and forth among the places we live, learn, work, and worship, and have more space to heat and cool. But instead of a discussion about city life or land policy, reducing consumption, or planning for renewable sources, we're focused on simply how to feed the machine faster. Even the fragmented parcels of what are coined "wilderness" lands are under threat, alongside national parks, national forests, state parks and state forests, which under the Romney plan could be given over to energy companies, to be drilled and plundered. Those purple mountains would take on a decidedly carbon- black cast, or simply be exploded, removed, and scraped for coal.

Americans know what the oil and gas and coal landscape looks like - but do we really? There is a hidden side to America's material prosperity. Most of its harmful manifestations are literally invisible - benzene and dioxins "disappear" into the air, while waste chemicals are pumped underground into injection wells. PCBs, Mercury, and Lead, toxic in the most imperceptible but potentially devastating amounts, persist in our bodies, in river sediment, in soils. Commonly used petrochemicals that are all around us and seemingly impossible to avoid have the potential to re-wire our bodies' endocrine systems. Carbon dioxide, which has precipitated the global climate crisis, is largely invisible. We all seemingly benefit from fast-flowing oil, and cheap consumer goods and foodstuffs, but the profound negative effects and associated wastes remain localized, often in poor communities. On a regional scale, especially along the Louisiana coast, thousands of miles of canals, pipes, and oil platforms criss-cross the gulf and reach deep into the countryside, blocking animal migration paths. These channels cut for oil and gas pipelines lead to erosion and provide direct routes for salt-bearing tides, killing freshwater wetlands, which are disappearing at the rate of a football field every thirty-eight minutes, transforming inland communities into coastal towns. Even the mighty and mythical Mississippi River has been transformed in its lower reaches into a de facto waste pipe, receiving massive quantities of farm chemicals, sewage, and industrial waste, creating an eerie, temporarily lifeless expanse of water off the coast of Louisiana called the "dead zone."

"Petrochemical America" visualizes the processes, places, effects and cycles of America's unseen extractive energy landscape and consumption patterns. We have in our collective memory a faint echo of the power and promise America's mythical pre-oil landscape in Katharine Lee Bates' epic poem - a love letter to the once sublime countryside. However, the effects of oil, gas, and coal extraction and combustion have been largely hidden from view, helping us maintain the picturesque mirage of what once was. Today, we are starting to understand the consequences at a local, regional, and global scale of the age of the present regime of oil and petrochemicals. What remains to be collectively imagined is what a shift away from fossil fuels and towards renewable energy forms would mean in the future in terms of generating a new American landscape aesthetic of promise and productivity, whether in the form of solar panels arrayed in the desert, rows of plantings of poplars and willows for phyto-remediation and biomass energy off shore wind farms on the horizon, or wave energy off our coasts. Americans together can start imagining the country as it could be and come together with the resolve that in order to reclaim America, The Beautiful, we need to actively transform the Big Oil landscape we have made - from lawn to habitat gardens, from black roofs to glowing solar panels, from single family isolated home to clusters and walkable neighborhoods.

Despite the renewable energy incentives advanced by the current administration, we remain on a path to not only destroy our own beautiful territory and its biodiversity but other places of indescribable richness around the world like the once teeming mangroves of the Niger delta and the rich peatlands and boreal forests of Canada. We need to open our eyes to reality rather than hiding behind the myth of the past American landscape, and choose to move forward and redefine America, The Beautiful as a country committed to creating robust environments, healthy communities, and renewable forms of energy that are visible, celebrated, and integrated into our everyday landscape. That would be something to sing about.

Check out these images from the book: 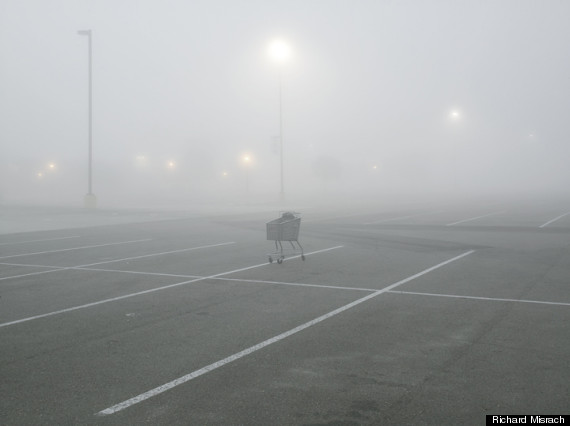