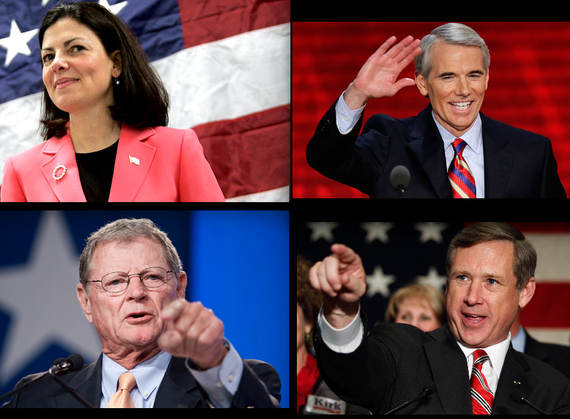 The U.S. Senate has been debating a bill to bypass the State Department and approve the Keystone tar sands pipeline. The bill, S.1, was the first in the hopper of this new Senate. Knowing S.1 is doomed by a veto from President Obama, yes votes will be no more than proclamations by senators of their unconditional love of oil.

Senator John Hoeven (R-ND) claimed on the Senate floor that building KXL will avoid other more environmentally-damaging methods of transporting tar sands oil, but this is a ridiculous rationale. We know from history that the oil industry fully intends to grow ad infinitum. Each pipeline means more oil. Supporters of KXL cannot reasonably justify the environmental damage tar sands development does in both Canada and the U.S., but since Hoeven is a mouthpiece for the oil industry, he must do his best.

The KXL debate has included consideration of many amendments. You can see how your senators voted here. Because the KXL environmental debate is largely about climate impacts, a couple of climate champs took the opportunity to put a spotlight on climate denialism. Some were shocked that only Senator David Wicker (R-MS) voted against Senator Sheldon Whitehouse's (D-RI) amendment, which stated simply that 'climate change is real and not a hoax.' But it turned out the language just wasn't specific enough. Senator James Inhofe (R-OK), famous for claiming anthropogenic climate change is a hoax, clarified that 'the debate is whether man is causing it.'

An amendment from Senator Schatz (D-HI) which stated that climate change is real and 'human activity significantly contributes', failed to achieve the needed 60 votes (the vote was 50-49 in favor). Senator Lisa Murkowski (R-AK) urged her colleagues to vote against the word 'significantly.' S.1's sponsor, Senator Hoeven, had even introduced an amendment just like Shatz's but without 'significantly', but it failed to pass by 1 vote because Hoeven voted against his own amendment.

Hoeven must have realized it might look idiotic to acknowledge anthropogenic climate change in a bill to approve tar sands expansion. Senator Murkowski and all 48 of her colleagues voting against the Schatz amendment have made it clear they are climate deniers.

The latest GOP denialist retort has been 'I'm not a scientist' (i.e., not smart enough to have a personal opinion). However, many senators don't want to look like dolts in denying climate reality, even if they choose to be beholden to fossil-fuel purveyors. For example, Senators Mark Kirk (R-IL), Kelly Ayotte (R-NH), and Rob Portman (R-OH) agreed that climate change is significantly caused by humans. They also voted for an amendment to allow the KXL oil to go straight through the U.S. and out the Gulf. This is clearly not about love of the U.S. economy.

We pray for the day when the U.S. Republican Party abandons its platform of climate denialism, but the debate on S.1 so far is not so promising. Since believing in facts shouldn't be a partisan issue, the hope was that the Schatz amendment would stimulate some bravery on the Republican side. We knew from history that not every single GOP senator in office is a climate denier (i.e., Collins, McCain, Graham, Kirk, Ayotte) - reaffirmed as these senators supported the Schatz amendment. However, these senators have been failing to lead their party toward reason and statesmanship when it comes to the greatest threat to the country. This was clarified in their blocking of an amendment by Senator Bernie Sanders (I-VT), which rightly stated that solving human-caused climate disruption requires rapid phaseout of the use of fossil fuels. The Sanders amendment was blocked by every Republican, plus three Dems: Claire McKaskill (D-MO), Mark Warner (D-VA, and Heidi Heitkamp (D-ND).

The last National Climate Assessment found that if we do not quickly and significantly reduce global climate pollution, the country will suffer widespread climate impacts. We already experience unprecedented floods, droughts, and fires that cost tens of billions of dollars per year - and which destroy the lives of many Americans. The new Senate leadership seems intent that Americans suffer these consequences by scoffing at international climate negotiations, refusing to pass policies to wean us off of fossil fuels, of taking a radically risky view that almost every scientist on the planet is wrong about climate disruption. The KXL debate, and the failure of senators to accept factual statements about climate science, make it clear that democratic process is still being sabotaged by the oil lobby and elected politicians who put oil before country. It doesn't matter where the oil comes from, it doesn't matter where it goes, and it doesn't matter if it hurts the U.S. economy or not. They just hands-down love oil. Fortunately, the American Energy [R]evolution is happening despite the Congress.