After so many years together, alt-rockers OK Go are still going strong, thanks to a dedicated fanbase and some of the most creative music videos of all time. Even if you're not the biggest fan of their music, there is no way you haven't seen (and loved) at least one or two of their clips. Because of these videos, the band has been able to make it work in today's ever-increasingly tough music industry.

I recently spoke with Tim Nordwind, the band's bassist, and he was pretty open about how it feels for the band to be out on their own, doing things their own way. 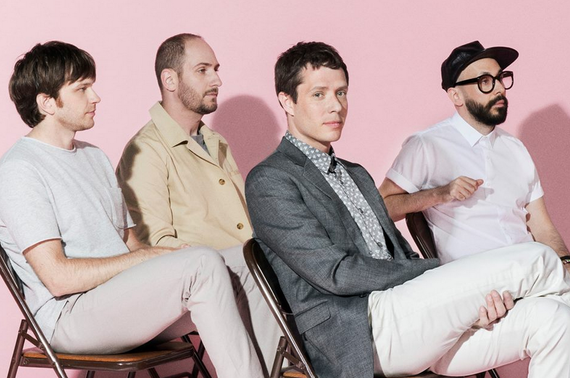 Congrats on the last album and how well things are going. It's your first one on your own label, isn't it?
Yes, it is, and thanks!

Were you guys nervous to leave a major label and strike out on your own? Has it gotten easier or harder since you first left?
We weren't that nervous to go out on our own. We had kind of a trial run because we left the label we were on right as we were releasing our third record, and they ended up giving us that record back, and we then re-released it on our own label. That was a very lucky situation. We had a very amicable split. We were able to see what it was like to put out our own record without having to fund it ourselves. That was the scary part this time around, but we've been able to figure that out now. I wasn't scared about the actual distribution of the record or anything like that. For the most part it was an exciting experience and then put it out in exactly the way that we wanted to put it out. Luckily the energy of fear was translated more as excitement than actual fear.

Your band is very well known for your inventive and visually stunning videos. Do you find it challenging to continually meet the extremely high bar you've set?
It's certainly a challenge, but it's one that we enjoy. Luckily we've been able to carve out a career for ourselves that is basically just about us taking what are the most fun and creative opportunities available to us. I don't think we feel the external pressure so much as the internal pressure to not repeat ourselves and to continually make things that we find interesting. It's really not a negative thing. We also go into this knowing that not every project we work on is going to get millions and millions of views or sell millions of records or singles, and that's okay. I think as long as we're making the things that we find the most exciting and fulfilling, then I feel like we're living the life we want to live.

Are you ever worried that if your band made a typical live clip or standard music video, your fans might be disappointed?
If we feel like putting out a live video is the thing we really want to do and we find that compelling, than cool. Sometimes we do think "let's just put out a video of us playing", and I'm pretty sure that won't get 20 million views, but I am sure that there is a cross section of our fans that would appreciate that. It's worth doing, as long as we think that the actual thing we've made is really good. If we didn't think there was some creative merit to it, we wouldn't put it out. We have a pretty good idea when we release something these days about how many views it will get. We have a sense that something will get millions of views versus a few thousand views, but it's all worth doing if it's an idea that we're excited about making.

You're four albums in now. How have things changed?
I think when we sit down to make records now we have a lot less of an idea of what we're going to make. We would sit down and say "let's write a stadium anthem", and we would stay at it until we had something that sounded like one. These days, we don't pay attention to our traditional instruments, and I don't think we spend so much time thinking about what kind of song we want to write. We sit down with a bunch of different toys and we start just putting things together to see what we feel is compelling. Once we get an arsenal of sounds and moments that we really like, we start trying to make art out of those ideas. It's a lot more of us hunting for magic in the dark than it used to be. We found that to be a really fun and enjoyable process, and it also allows us to make records that sound a bit more like the moment in which they were made. They sound more like us now than our earlier records did. This record is very much a reflection of who we are these days.
I like our first record a lot, but I remember after we made it, we felt like it didn't represent what we most liked about music. It was much more what we thought we should've been writing in those days. I think we've allowed ourselves to be creatively more free.

What are you guys listening to now that you've just discovered?
There's this producer from Moscow that we met that goes by the name 813, and he makes futurestep EDM. I think it's really interesting. It's very much his own brand, and I think it's awesome.

Should we expect an OK Go EDM album?
I don't know. Hungry Ghosts is a lot more electronic than our other records, but it's certainly not an EDM record. I doubt we'll ever fully go into that world, but I certainly love a lot of the production I hear. I find the most cutting edge creativity in EDM and hip-hop productions. I certainly wouldn't mind taking what I like from that world and blending it into what we do a bit more.