Not the color per se. I actually love the color. I have several pink items of clothing and my toenails are pink right now, the only color of nail polish that I like. My living room walls are Benjamin Moore Odessa Pink. But given that pink is now a corporate-created, profit-driven cotton, polyester or plastic gender signifier for girls, we've got way too much pink Kool-Aid drinking going on. 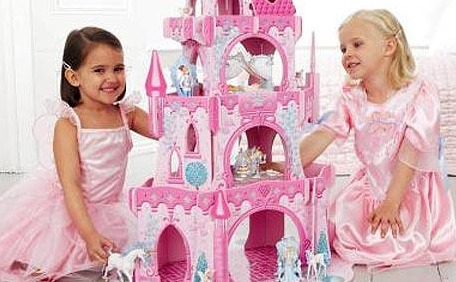 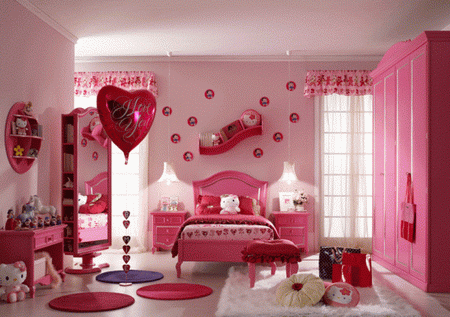 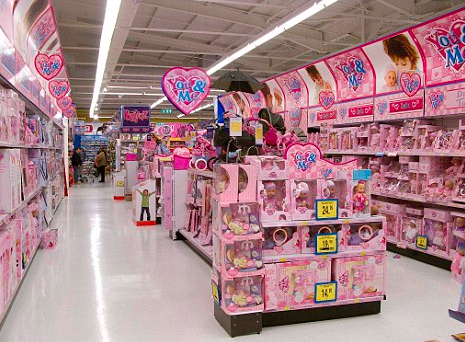 Cue angry commenters. I am only one paragraph into this blog post and that sound I hear is the wind whistling in my ears as a cyclone of enraged readers press their fingers firmly on the Page Down key to get to the comment section. Not a second can be lost in defending pink or asserting my idiocy, feminazi-ism and lack of anything better to do with my time than try to turn girls into boys. They've got me! It's a conspiracy!

The color pink is nice. The pink ghetto? Not so much. Because here's the thing: Pink now symbolizes something, and I'm not talking about breast cancer. I know, I know... girls just "naturally" like pink! They do! Studies show it! Parents observe it!

Hmmm. Can we peel back a layer on this onion? Why do so many girls go nuts over this particular color to the point of wanting every item of clothing to be pink and every toy to be pink and their bedrooms to be pink, refusing other colors, when it didn't used to be like this? What has changed? Why does it matter? If you don't want to think about these questions because they upset your worldview, by all means skip the intellectual analysis.

For everyone hanging in with me, here's my take. That's what bloggers do -- they give you their take. Then, you take what you like and leave the rest. Getting beat up in the comment section goes with the territory. We're masochists like that. Discussing pink has become a blood sport.

So here goes. I've written satirical pieces about the scourge of pink fishing rods and Santa's workshop running out of the color pink and had a lot of fun with it. It's a way to expose the absurdity of pinkwashed girlhood (and now womanhood) while retaining my sanity with biting sarcastic humor. But the issue is deeper than absurdity. Suddenly, girls are associated with -- and seem to need -- a particular color to represent them, because it is marketed to them as both signifying what it means to be female, and that femaleness is the most important thing about them. This insidious balkanization somehow feels good. It is an easy way young girls can feel secure that they are performing their gender properly.

What single, limiting color is marketed to boys and men that they cling to for dear life, that they use to advertise and feel secure about their own gender, that marketers peddle to them in every aspect of their lives, and that internet commenters defend to the bitter end?

Nope, not really. Sure, it's been "blue is for boys" since the 1940s. (And before that, pink was the color for boys and blue was the color associated with girls). But where are the baby blue fishing rods, just for the guys? Where are the boys who will only wear blue, only play with blue, and need to make a 24/7 statement to the world that the most significant thing about them is their gender? Boys have all the colors but pink (which is different problem). They have clothes and toys of red, blue, green, orange... and none of those colors shout, "I'm a boy!" the way pink shouts, "I'm a girl!" I was talking to a teacher friend recently who said that 10 or 15 years ago, if she asked her Kindergarten class what their favorite colors were, she heard many different answers. Now, she still hears the boys name many different colors, but the girls almost all say pink, and perhaps one or two say purple. She said it was disturbing to her that only the girls have smoothly descended into this kind of group-think, and she wonders why so few parents are concerned about it.

Why have adults created the pink ghetto? Why do products for boys allow them to identify themselves as smart, adventurous, funny, athletic or any other personal attribute first, before male? What does it even mean that we've created this weird culture where a generation of girls is growing up thinking that being a girl is so rigid and narrow and prescribed? I'm seeing a new angle to the Smurfette Principle. Boys are Brainy, or Architect, or Doctor, and girls are... Smurfette. In other words, female. Unless, of course, they have the ego strength and the social strength to buck the system and risk being accused of transgressing gender norms by playing with "boy toys" or wearing "boy clothes." A lot of people do not see a problem with expecting that of little girls, but I do.

I recently read a blog post by Michele Yulo of Princess Free Zone about there no longer being any "in-between-ness" when it comes to gender for children. Worse than the corporate, greedy reason behind this trend is the aggressiveness with which parents will side with corporations against the parents of girls who are stressed by what has vanished in terms of options that we ourselves had as children.

On this blog post by PFZ was the following comment by a very young woman, still a teenager herself. When I read it, my heart leapt, because she gets it. Here's what she had to say:

As a young adult born in the mid-90s, I honestly do not remember when girls in advertisements weren't wearing or playing with some shade of pink. But I do know that it has gotten worse. My sister, eight years younger than me and currently riding high in the Disney Channel phase, has the TV on all the time, and it's unnerving how much pink there is in the "girl commercials" which are, unsurprisingly, the only commercials in which she thinks she can take any interest.

As it gets closer to the holiday season, I find myself with a slowly increasing feeling of dread at the looming influx of pink toy commercials -- not because I have an aversion to pink toys, but because there is nothing to balance it out.

And it is evident that this brainwashing is all too effective. I made the mistake this year of getting my sister an orange and white teddy bear -- a charming thing with a blue satin bowtie around its neck. In less than a week, the poor thing had been stripped of its blue accessory and its white areas were painstakingly colored pink with a Sharpie marker. When I asked her why she had done those things to the bear, her response was, 'It was a boy toy. I want a girl toy.' ~ T. Muir

Michele Yulo responded to this comment, "Marketing works." It sure does. It would not be a multi-billion dollar industry if it didn't. And yet, so many adults rush to defend these large and powerful corporations who have invented what amounts to the most clever marketing scheme in the history of merchandizing. And these adults do that while shaming, berating, and belittling anyone who challenges the paradigm. What is up with that? No one is attacking them personally, so I wonder if the defensive response bespeaks of insecurity. Perhaps it feels threatening to have anyone criticize a social system you've invested in for your own child or yourself.

Of course girls want pink. And they'd want green instead if that were the color on the "For Girls" aisles, assigned rigidly to their gender, and spoon-fed to them since birth. The in-house studies conducted by toy manufacturers would "prove" to everyone that girls naturally gravitate to green, just as their studies now "prove" that pink is innately for girls as a justification for bifurcating the market so they can double their profits. This isn't rocket science. And my goodness, the corporations need no defending -- they are doing just fine. They'll take it though!

You know who does need defending? Girls and women who don't like these gender boxes, and who wish that people would stop trying to shove them back into them. And if you really want to have your eyes opened about the power of color-coded symbolism, start Googling for articles about this topic on politically or religiously conservative blogs, where there could not possibly be more enthusiasm for pinkifying the female gender. It goes hand-in-hand with their ongoing agenda to bombard girls and women with products, media and policy that blast them back to the 1950s and those good old-fashioned gender roles. They really can't get enough of the color pink when it comes to women and girls. It's working out well for them.

Start also paying attention to who some of the loudest commenters are on articles about this topic -- men. Not all men! Just look closely at the seething resentment some men express when anyone writes an article about the problems of our new pink princess girl world. They have a lot to say to women like me who are WWF (writing while female) on this issue, and it gets really ugly really fast. They like the pink ghetto, want girls and women submerged in it, and lash out when anyone points out that there are many kinds of girls, or -- even more aggressively -- when anyone argues that this new type of gender stereotyping should actually, you know, stop. No, they don't want that. Ask yourself why.

Sometimes a cigar is just a cigar, but sometimes a cigar is a brilliant marketing machine that a lot of people have climbed right aboard and not questioned. I'd argue that the color pink used to be the former, but is now the latter. Agree or disagree, but consider one last question:

Why is it so controversial to challenge this paradigm?

Because I question it. I really do. And there's no reason to feel angry or threatened about the notion that maybe, just maybe, more options for girls is a better idea than less options. Pink will always be one, but we could bring back more. My two cents.

More:
Parentsgender stereotypesstereotypes girlspink
Newsletter Sign Up
Raise the kind of person you'd like to know
Subscribe to our parenting newsletter.
Successfully Subscribed!
Realness delivered to your inbox