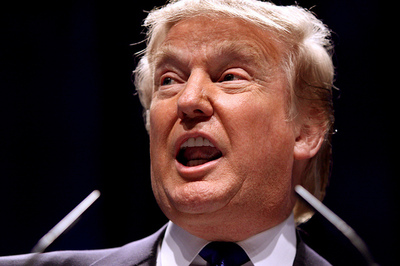 Tossing "anchor babies" to the ravening crowds, Trump has doubled down on his immigrant-bashing by calling for an end to birthright citizenship. Questioning the plain meaning of the 14th Amendment as declared by the Supreme Court passes for brilliance in the bizarro world of rightwing media thought these days.

So it was perhaps inevitable that all the paranoid, xenophobic, Muslim-baiting, and racist tropes of the right would meet in this: a rightwing radio blowhard is calling for the restoration of slavery. This is too rich to paraphrase, so here ya go:

"Put up a sign that says at the end of 60 days, if you are not here with our permission, can't prove your legal status, you become property of the state," Jan Mickelson said during his show on Monday. "And then we start to extort or exploit or indenture your labor."
...
When a caller said "it sounds an awful lot like slavery," Mickelson asked: "Well, what's wrong with slavery?"

With all the GOP wannabes racing to the right in hopes of overtaking Trump, how long can it be before one of them tosses this turd into the shitstorm that is the 2015 Republican campaign? Hell, maybe the Donald will do it himself. It's the natural next step for anyone who denies the constitutionality of a constitutional amendment.

But, given how many GOP presidential candidates have followed the Donald in trashing the 14th Amendment -- Cruz, of course, Santorum, and Jindal, no surprise, but even Chris Christie's squeezing aboard the Barmy Bus. So how surprising would it be if, say, Scott Walker -- he who compares union workers to ISIS ax-swingers -- tries to pass on the right by endorsing the return of slavery?

Slavery as a political stand has so much to offer: it unites all the fearful themes of rightwing paranoia in one and offers the ultimate -- not to say final -- solution. Think of it: take back America -- check. Restoring heritage -- check. Rounding up illegal immigrants -- check. Dealing with thugs in hoodies -- check. Abolishing the minimum wage -- double check!

But the grand finale, the true brilliance of restoring slavery is this: the birthers can make a comeback -- and who was a bigger birther than Trump? -- and declare Barack Hussain Obama an illegal Muslim immigrant. Why bother with impeachment when you can just clap the hated black president in chains and drag him away? It would be a rightwing wet dream come true.