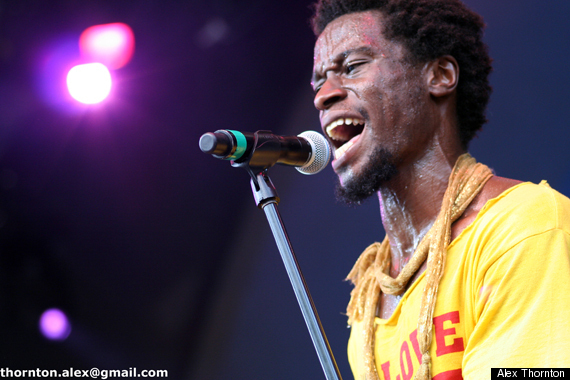 Last night over 12,000 eager listeners packed every inch of the Prospect Park Bandhell while thousands more waited outside of the gates when they were closed due to overcrowding. Braving the heat, they waited to see the Celebrate Brooklyn! OkayAfrica World Cup 2010 Finals Party hosted by Sahr Ngaugah of Broadway's FELA! and headlined by iconic hip-hop gurus The Roots.

Celebrating Spain's win in the cup and the first time the tournament ever took place on African soil, the show began with Philadelphia's Zakee Kuduro performing his unique blend of Afro-beats, hip-hop and punk, all with electronica overlays. The crowd was thrilled when he was joined by members of The Roots, who helped take the set to the next level, setting a high bar for the remainder of the evening's acts.

Next up were Dragons of Zynth, a Cleveland-born, Brooklyn-based indie band featuring twin, New York-born frontmen, Aku and Akwetey. The Dragons flaunted their psychedelic glam rock, adding in free-form jazz and soul to create a melodic and cerebral sound that was nothing short of effectual.

Sahr Ngaugah took a step back from his job as emcee to emote alongside several dancers from FELA!, whirling around the stage to the booming sound of bass beats, providing an illuminating backdrop to his vocal performance. He promoted his favorite non-profit organization, Falling Whistles: A Campaign for Peace in Congo, before handing off the mic to Brooklyn's Ghanaian-born Blitz the Ambassador. The djembé-playing artist rocked the stage. And while his set was short, he lived up to his name as an ambassador, introducing the audience to his intoxicating, world-wise hop-hop.

Up next were Bajah + The Dry Eye Crew, a band of Sierra Leonian origin living in New York ("dry eye" being a colloquial phrase for "bold" back home). Their home-town superstardom comes as no surprise, as their funk-infused reggae and hip-hop creations are capable of getting anyone up on their feet and dancing. They were joined on-stage by more FELA! dancers, who, again, dramatically added to the electricity already pulsing through the crowd.

Continuing the party, the assemblage roared as The Roots hit the stage as the last act. Hailing from Philadelphia, the Grammy award-winning band brought forth their signature blend of hip-hop and jazz full force, living up to their name as one of the twenty greatest live acts in the world by Rolling Stone.

Brooklyn's own Talib Kweli lent his critically acclaimed voice to the set much to the delight of the masses. (Unfortunately, due to the large crowd, the press was not allowed access to the stage to get photographs of the artists.) DJs came to the rescue at the end of the show with their own beats to wind down the riled crowd after a night of conscious music and politically savvy commentary.

The audience was made up mostly of individuals in their twenties to thirties, representing a wide array of ethnic backgrounds -- though the majority were of African descent, as depicted by many flags proudly hoisted into the air. A site to behold, the crowd was enthusiastic and eager to dance to the night's diverse display of hip-hop. Each act had their own take on the ever-broadening genre, but similar in spirit, anyone who enjoys any one of last night's bands was likely to appreciate the rest. All in all, the show was a perfect closing celebration of Africa's first World Cup and an incredible launch for OkayAfrica!