Lena Finkle's Magic Barrel, a new graphic novel that humorously catalogs the tribulations of post-divorce dating, has been lauded as "Girls" for grown-ups, and for good reason. Author Anya Ulinich's funny caricatures of her dates, both the overzealous and the deadbeat, are anchored in the quiet moments her protagonist shares with her two daughters.

Her observations about dating are artful and wise. After a series of so-so romantic encounters, she writes, "Dates were like deep friendships, filmed in time lapse; one-night stands were like express marriages, from courtship to dissolution." While these sentiments reveal Ulinich at her strongest, she's also got for a knack for pointing out the hilarious stereotypes that emerge when perusing online dating profiles.

Ulinich writes, "I wouldn't date... a guy scaling a cliff. A guy in a wetsuit. I wouldn't date a computer programmer posing in a loincloth on the playa." 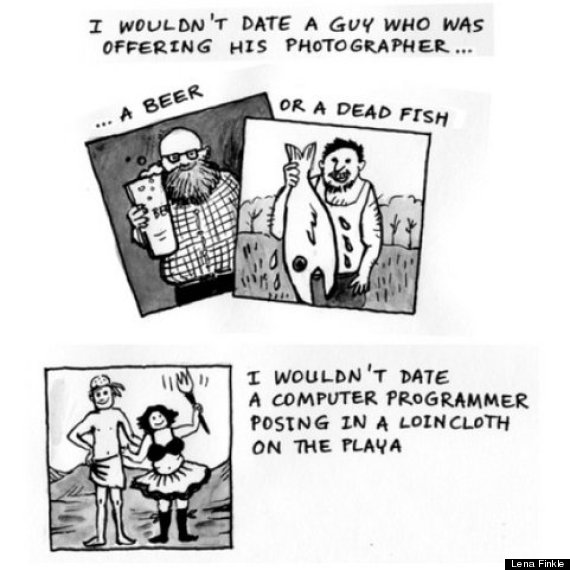 Her gritty aesthetic complements the realness of her scenes, which are reminiscent of the handful of other graphic novelists currently illustrating less fantastical stories (Jillian Tamaki, Alison Bechdel and Marjane Satrapi spring to mind). Beside an image of her protagonist anxiously applying lipstick, she writes, "When I'd entered my last relationship at twenty, we'd all been new and shiny... now I was meeting people who had stories."

Read an excerpt of Lena Finkles's Magic Barrel below: