Christopher Cantwell never asked to become a moderator of online dating site OkCupid. The site tapped him, without warning, and now he’s privy to private conversations, lovers’ tiffs, and the sometimes dark, often inane, unseen side of the online dating world.

Many OkCupid moderators are pulled from the site’s userbase and just six months after signing up for the singles site, Cantwell was elected to the army of arbiters who review posts flagged by OkCupid users and are tasked with marking the profiles “deleted,” “left alone” or “can’t tell.” Moderators can see comments from other moderators and how they ruled on an issue, but not who those moderators are or what ultimately happened to each of the posts in question. OkCupid’s arbiters of right and wrong also have access to the profiles of people who were flagged, though not the people doing the flagging. OkCupid did not respond to requests for additional information on how it works with its moderators.

What doesn’t fly on the site? There are strict guidelines for profile pictures -- no nudity, it must be of you (no "pets, cars, artwork, etc."), no extreme closeups -- and a predictable set of rules governing good behavior -- no spamming, no hate speech, no harassment, no "commercial solicitations," no “crude, overt sexual remarks" and no threatening messages.

Cantwell walked us through life as an OkCupid moderator and what happens on the side of the Internet most never see.

What did you have to do to become qualified to be a moderator? Absolutely nothing, apparently. I’m not a very active user of the website and all of a sudden they notified me that I had been made a moderator. As far as I could tell, it was completely random.

What kinds of things do you see getting flagged? Users can flag a profile and then the profile gets put into what’s basically a queue for the moderators to go through. And most of it is kind of frivolous. People report things like, “There’s a picture of their car” and I’m like, “I don’t care if they post a picture of their car, I don’t care what the rules are.” Out of a few dozen, I’d say I’ve only flagged two or three for deletion.

You mentioned that one of the things flagged was a series of private messages between two users. A man contacted another user, the “flagger," who said she/he wasn’t interested in him because he was too young for her/him. He responded with a terse “You’re pretty ugly yourself.” One of your fellow moderators weighed in with, “Not ban worthy, but he’s clearly a jerk.”

It’s remarkable that people have access to private messages, in some cases, and get to weigh in on them.

Yes. It is interesting that this person flagged a private message on a dating site and now it’s up for scrutiny by anonymous people who have apparently been chosen as moderators for no reason at all that I can find.

What have you learned about people since being a moderator on OkCupid? I’ve learned that people are nitpicking and if they see something they don’t like, they’ll flag it for no good reason. For example, I’m looking at picture of woman in a driveway with dog and the picture is a little far away. So someone flagged the picture because it doesn’t show her face. I haven’t done a lot with it because most of the complaints, like this one, are total crap. 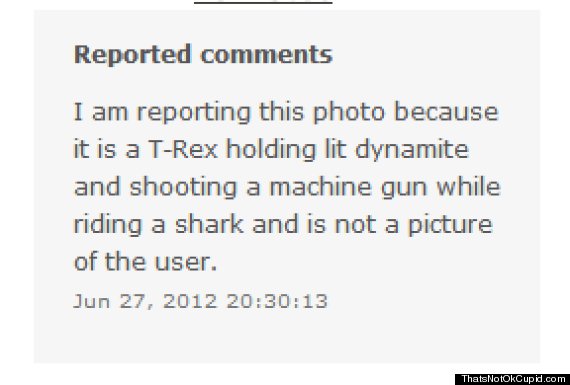 via ThatsNotOkCupid.com, a Tumblr of screenshots chronicling "the woes of a lowly OKCupid moderator."

Why do you think people bother to tattletale? And what does that say about how we behave online? For the same reason that they vote for asshole politicians and 'cause all the other problems they cause in the world: because they’re assholes. I really have no faith in the human race. I look at this stuff, I look at politics and I think people are idiots and there’s just no hope for them.

What’s the strangest thing you’ve seen during your time as a moderator? I’ve seen some nude photos, but I’m no stranger to that, and I’ve seen scammers. The worst thing I’ve seen is people asking for money and it looks like it’s bullsh-t. I used to work in a data center and I was responsible for the abuse department serving thousands of servers, so seeing scammers trying to rip people off could be off-putting for some people, but it's run-of-the-mill on the Internet for me.

In the course of your work in the abuse department you said you had to deal with everyone from spammers to child pornography purveyors. What would you do when you came across something illegal? In the case of child porn, we would pull down the site and contact the FBI. Though there was one incident where the FBI demanded that we leave it up because they were running an active investigation on our networks and want to see who was accessing it. That was pretty disturbing. We told the site [hosting the child pornography] that the server had frozen up.

Besides that people are idiots, what’s your takeaway from your look behind the scenes on OkCupid? I’m not taking much away from this except people are nosey busybodies.

Still, I would also say OkCupid looks like an okay site and you shouldn’t worry about it -- moderators are not deleting people for no reason, the complaints are pretty mild. There’s a shining little glimmer of hope for mankind.

This interview has been edited and condensed for clarity. For more on what goes on behind the scenes of OkCupid, check out the NSFW Tumblr ThatsNotOkCupid.com 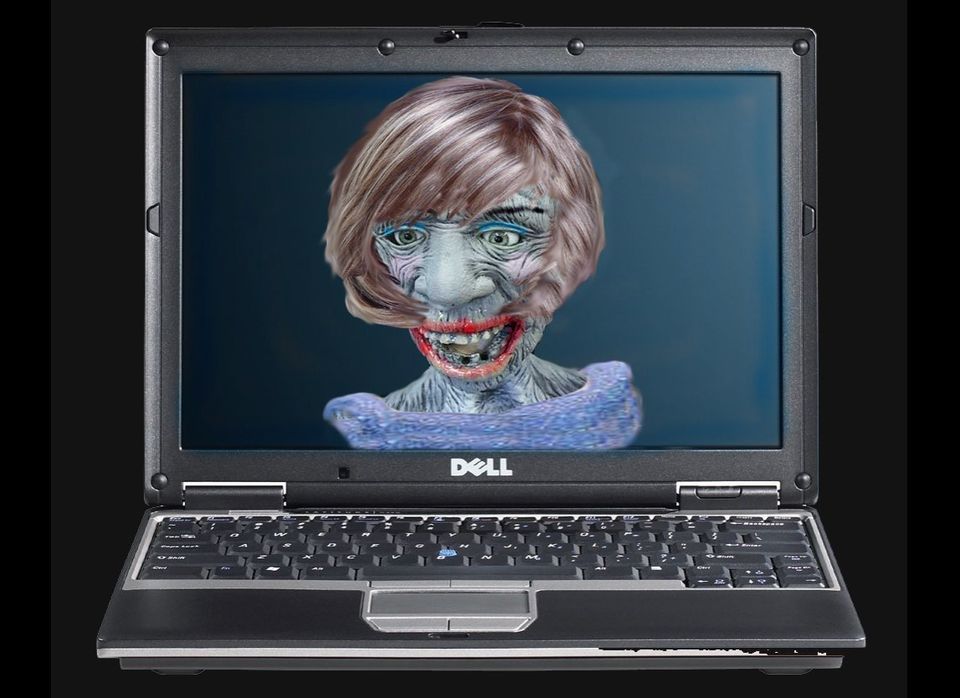 1 / 11
Don't Exaggerate
Sometimes we embellish the truth, particularly when we want to impress a possible mate. But <a href="http://www.eflirtexpert.com/about-laurie" target="_hplink">Laurie Davis from eFlirt</a> warns us against exaggerating. "Overplaying your lifestyle will attract different matches who, ultimately, won't be the best fit for who you really are," she says. And <a href="http://cyberdatingexpert.com/" target="_hplink">cyber dating expert Julie Spira</a> agrees, also noting there is a huge difference between fibbing about your height vs. your martial status. "Single is single, and divorced is divorced," she says.
<a href="http://www.flickr.com/" target="_blank">Flickr:</a> <a href="http://www.flickr.com/people/23905174@N00/" target="_blank"> Don Hankins</a>