Women on Japan's island chain of Okinawa on Wednesday demanded an apology from an outspoken Japanese politician who suggested US troops there make use of its thriving sex industry.

The comments from Osaka Mayor Toru Hashimoto earlier this week came as he also said "comfort women" -- who most historians agree were pressed into sexual slavery for the Japanese imperial army during World War II -- served a "necessary" role in keeping soldiers in line.

Twenty-five women's groups in Okinawa issued a statement claiming to be a voice "from Okinawa, which still sits in the midst of unhealed scars from war and daily violence imposed by the military.

"We strongly protest against the Hashimoto comment and demand an apology and retraction of the remark," the statement said.

"Regardless of whether it is war-time or not, a view to use women as a tool (to let out sexual frustration) is intolerable," said Masako Ishimine, a senior member of a local women's body, quoted by the Okinawa Times.

"Does he mean women should simply take it because men work hard?"

The outrage came on the day Okinawa marked the 41st anniversary of its reversion to Japan at the end of post-WWII US occupation and after comments on history that provoked ire in South Korea and China.

Up to 200,000 women from Korea, China, the Philippines and elsewhere were forcibly drafted into brothels catering to the Japanese military in territories occupied by Japan during WWII, according to many mainstream historians.

In the Philippines, Rechilda Extremadura, the executive director of Lila Pilipina, an advocacy group whose 104 members were comfort women described Hashimoto as callous.

"No country has the right to violate women and make us victims so they can be fodder for war," she said. "Someone in his position should be more responsible with his remarks."

On its surrender at the end of the war, the whole of Japan was placed under US-led allied jurisdiction.

But while control of the country was handed back to a home-grown civilian government in 1952, Okinawa remained effectively US territory until 1972.

In the years since the war it has morphed into a curious mix of subtropical vacation paradise and the strategic US "keystone of the Pacific" which today is home to around half of the 47,000 US troops in Japan as part of a security treaty.

The weight of hosting those servicemen is keenly felt by the island chain's 1.3 million people, who complain of the noise and risk of accidents posed by massed US military hardware.

Crimes associated with the testosterone-charged presence of thousands of young troops -- including rapes and assaults -- frequently test relations between US bases and their host communities.

Osaka mayor Hashimoto stepped into this fray in recent days with a suggestion that servicemen be allowed to patronise legal sex businesses there to give them an outlet for frustrations that might otherwise result in violence or crime.

Okinawans reacted with revulsion, saying comments like this were symptomatic of mainlanders' view of them.

Shoko Toguchi, a senior member of a women's rights group, said Hashimoto "lacked the sense of human rights and was not able to feel the pain of Okinawa's people", Jiji Press reported.

Okinawa governor Hirokazu Nakaima told public broadcaster NHK on Wednesday that more than four decades after rule reverted to Tokyo, the islands still had more than their fair share of US troops.

"I take the side of respecting the Japan-US security treaty, but I still believe the entire nation should share the burden," he said.

The anniversary also came just a week after Chinese state media published calls for a re-think of the sovereignty of the archipelago, with hints that Beijing was the rightful ruler.

Beijing is aggressively pushing its case for ownership of disputed islands that are administratively part of Okinawa.

The presence earlier this week of a foreign submarine -- which media speculated was Chinese -- off an Okinawan island further fanned fears over Beijing's intent in the area. 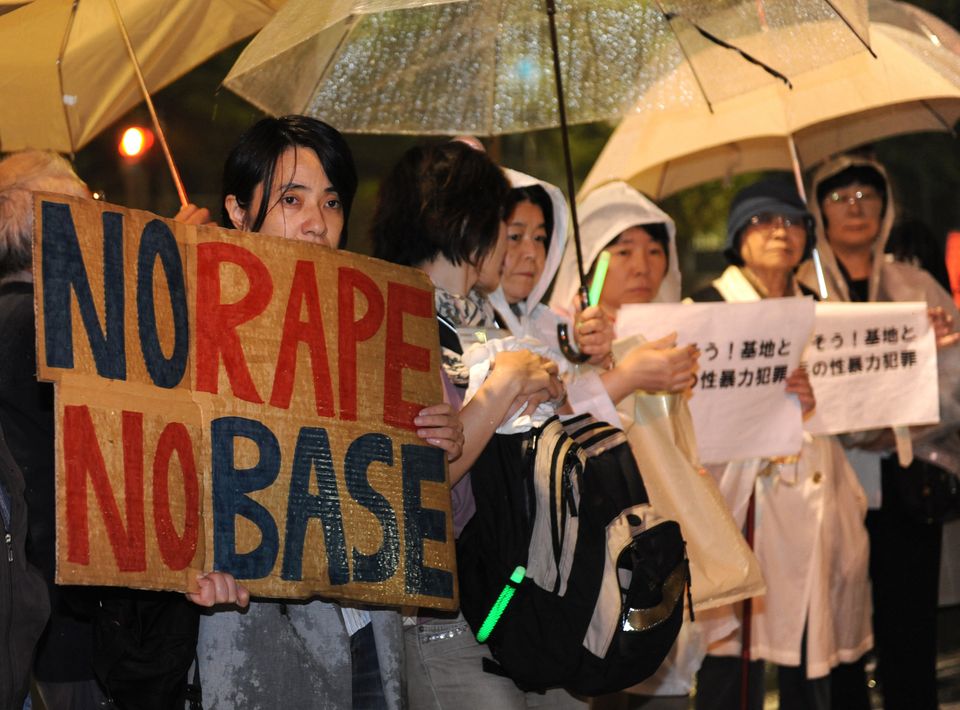 1 / 5
Some 50 civic group members hold placards to protest over the alleged rape of a local woman by two US servicemen in Okinawa, in front of the prime minister's official residence in Tokyo on October 17, 2012. (YOSHIKAZU TSUNO/AFP/Getty Images)
Getty Images