Sen. Constance Johnson, a Democratic state senator in Oklahoma, has proven that the legislative process does allow for some terrific satire -- even intentionally. To undercut the message of a controversial "personhood bill" brought forth in the state, which would give zygotes the same rights as adults, Johnson added a provision that would treat any sperm not intended to fertilize an egg as an "an action against an unborn child."

However, any action in which a man ejaculates or otherwise deposits semen anywhere but in a woman's vagina shall be interpreted and construed as an action against an unborn child.

In the spirit of Monty Python's "Every Sperm is Sacred" song, Johnson made clear that she added the provision to protest her view that the "personhood" bill, which takes cues from similar laws brought forth in several other states, is inherently a sexist one. Her provision sends a signal that although men and women are equally responsible for the conception of a child, a woman is the only party whose body and life is affected by the pregnancy. Under Johnson's amendment, it would be illegal for a man to eject sperm in any manner except during condomless, heterosexual intercourse, in order to protect families.

On Thursday, Johnson explained the bill in a column for The Guardian. Recognizing that she intended to "draw humorous attention to the hypocrisy and inconsistency of this proposal," she explained in part that she wanted to point out the "absurdity, duplicity and lack of balance inherent in the policies of this state in regard to women."

Johnson is not the first legislator to protest bills that target the right to an abortion by introducing humorous legislation to equalize the sacrifice made by men and women. To protest a bill that would force women to undergo an ultrasound before getting an abortion, Virginia State Senator Janet Howell introduced a bill that would have forced men to receive a rectal exam to receive erectile dysfunction medication.

Her full amendment is included below. 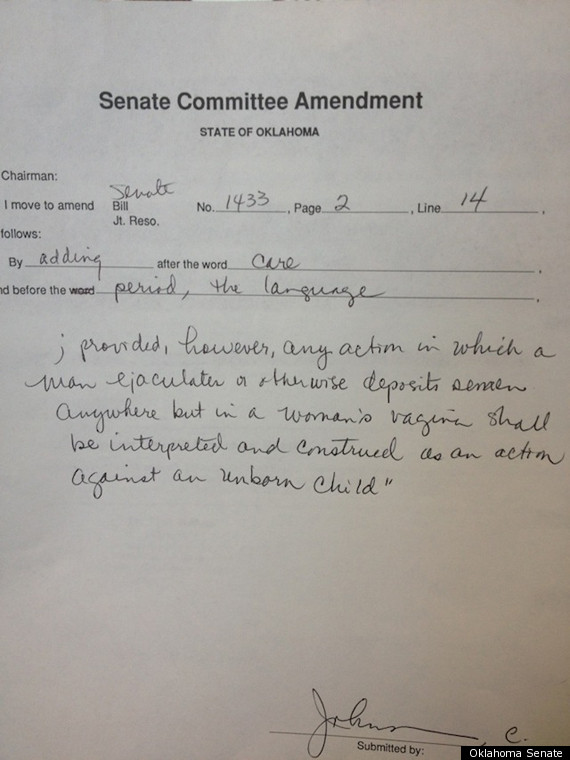