An Oklahoma animal rescue worker is one of the many heroes to have emerged after a slate of tornadoes devastated the state.

Yesterday, the Associated Press photographed Maeghan Hadley, owner of 1 Day Ranch animal rescue, tending to a kitten that was pulled from the rubble left by one of the initial tornadoes that touched down near Shawnee, Okla. on Sunday. 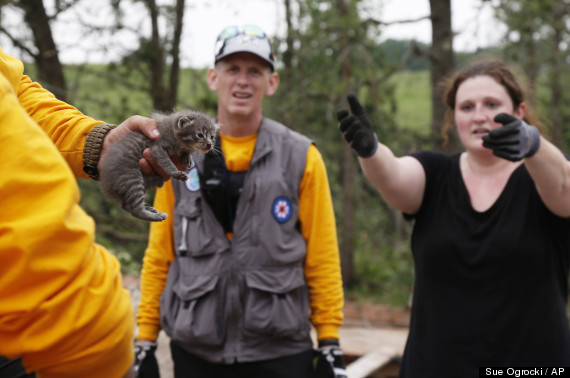 CAPTION: Maeghan Hadley, right, of One Day Ranch pet rescue, reaches for a kitten pulled from underneath the rubble of a mobile home destroyed by Sunday's tornado in the Steelman Estates Mobile Home Park near Shawnee, Okla., Monday, May 20, 2013. (AP Photo Sue Ogrocki)

"Her home was almost hit by the tornado that ripped through another town the day before yesterday," Reddit user katality, who claims to be a friend of Hadley's, commented in a post yesterday. "She's helping all sorts of people and their pets after the devastating day we had in Oklahoma."

According to AP, a Chickasaw Nation rescue group helped rescue the kitten from the rubble of a destroyed mobile home. The rescue workers are among many who continue to comb the debris for survivors. 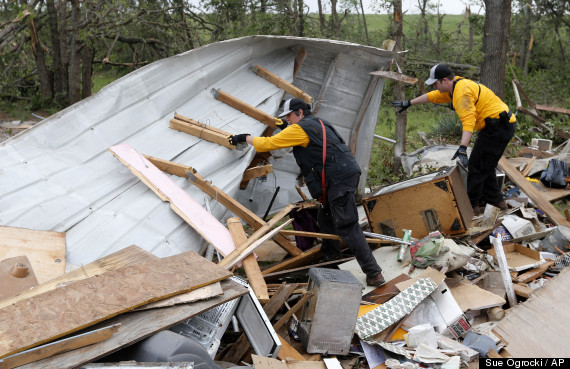 CAPTION:Members of the Chickasaw Nation search and rescue group dig through debris, Monday, May 20, 2013, to locate a kitten buried in the rubble of a mobile home destroyed in Sunday's tornado, in the Steelman Estates Mobile Home Park, near Shawnee, Okla. (AP Photo Sue Ogrocki)

Other images of hope and heroism have surfaced following the tornadoes. A couple from Oklahoma City took this photo of an inspiring message amongst the rubble from the deadly tornado that hit Moore on Monday.

See more heroic images from Oklahoma in the slideshow below.