New York City’s High Line has always felt like an architectural utopia. A defunct railroad reclaimed as an elevated park, the space invites the mingling of tourists and locals, west-side parents and Brooklyn youth. It encourages strolling, skyline-gazing, jostling (gently) for seating space -- and, starting this summer, Lego brick building.

That newest opportunity for communal interaction is the result of Olafur Eliasson’s "The Collectivity Project," an art installation that provides the conditions for viewers to co-create. Or, in simpler terms, the Danish-Icelandic artist has offered up thousands of white Lego bricks for High Line-walkers to build their own mini-urban utopias.

On the surface it may strike as child’s play, but beneath the blocks lies an extensive theory of how people define spaces and negotiate hierarchies -- crucial questions in today's New York City. 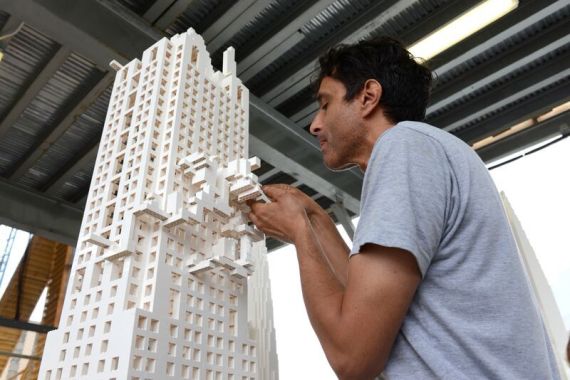 Though Eliasson lives in Copenhagen and works in Berlin, he has a longtime relationship with the installation site. After spending the early ’90s in New York, Eliasson has consistently returned around twice a year, maintaining a finger on its ever-changing pulse. The year 2008 saw both his “Take Your Time” exhibition at the Museum of Modern Art and “New York City Waterfalls," a massive public art installation in New York Harbor. In fact, Eliasson was involved in the early High Line renovation discussions, though he opted not to engineer the area himself.

Recently, colleagues reached out to him again about a collaboration in the park, and “The Collectivity Project” seemed a natural fit.

This summer actually marks the project’s fourth appearance, with previous Lego installations happening in Tirana, Oslo and Copenhagen. But Eliasson stressed, when talking to The Huffington Post, that the work is not like a painting that remains stable as it goes on repeated exhibitions. Local character changes the project dramatically. 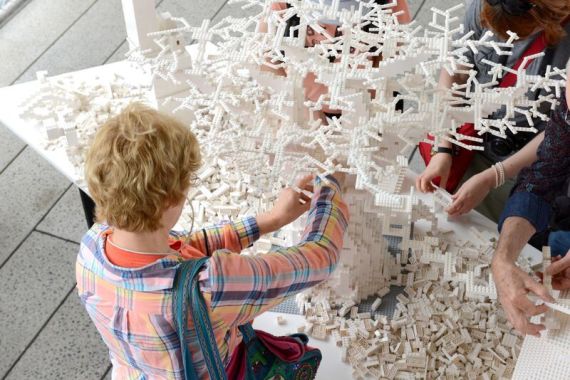 In Tirana, Albania, for instance, the Legos arrived just after the end of Socialist Party control. Viewers were encountering the bricks for the very first time, and unconventional building antics -- like Legos stacked hole-side up -- ensued. Eliasson recalls a moving moment when a police officer and cigarette-selling child abandoned their normally separate social roles to create together.

In Manhattan, responding to local context meant collaborating with architectural firms such as Bjarke Ingles and Robert A.M. Stern. Older renditions of the project began with an entirely blank slate, but this time Eliasson reached out to developers working around the High Line to build a series of starter edifices, whose stature would inspire participants. 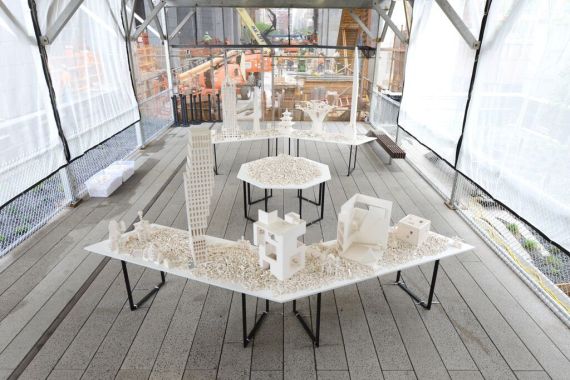 Though Eliasson describes himself as utopian, a blank slate of possibility seemed incongruous with the setting of New York City. He thought it might smack of a “let’s all be naive and sit in a circle and hold hands” sentiment, he said, which would suffer from attention deficit in a city overwhelmed with creative endeavors.

Identifying differences in local context has a tendency to lead to blanket cultural statements -- for instance, on collective Europe versus individualistic America. But Eliasson is wary of drawing “good and bad, red and blue” distinctions between these cultures. For him, each context includes different challenges and solutions to public spaces. If European collectivity is remarkable for its large-scale government endeavors, Americans manage private interests with smaller, neighborhood-level works.

Certainly, the High Line itself exists at the crossroads of public and private; accessible to all, it’s also gentrified the Chelsea neighborhood and benefited the same private architectural firms Eliasson's enlisted in the piece. Collectivity, for Eliasson, means negotiating, more than removing, these hierarchies. 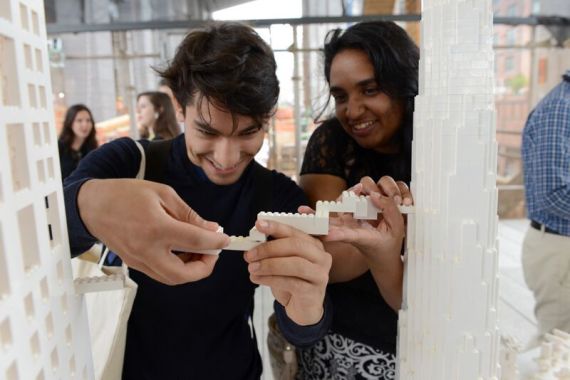 The hierarchies he talks about exist between people and the larger social structures surrounding them. And they exist between different people, who are brought together by the project but would otherwise remain separate.

Those deemed traditionally more knowledgable or powerful, Eliasson explained to The Huffington Post, might find their roles inverted. The teenager is likely more gifted with Legos than his father, just as the Albanian policeman found himself working with an unexpected collaborator. Rather than rely on speech and conversation -- which Eliasson believes can create a "territorialism" between different parties -- viewers use "muscle memory" to communicate with each other. It’s a language that levels differences in class and age.

The website description of the project says the installation provides a “compelling counterpoint” to the surrounding area, and Eliasson stressed that viewers should see their Lego versions as “models” for the buildings cropping up around viewers -- not as facts of life. That is to say, they are structures that can be changed and "negotiated" (Eliasson’s favorite word). 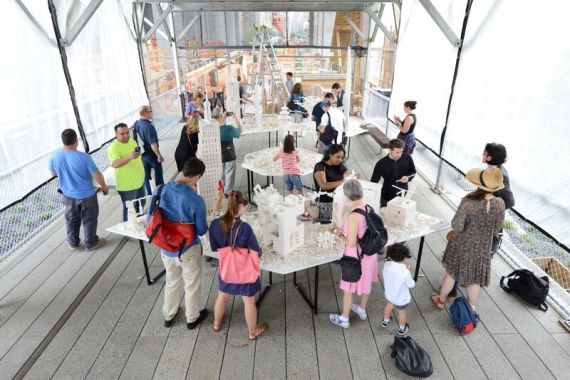 Eliasson sees this as a “phenomenological approach” to creating space, accepting the stimuli of those around him and co-creating with others -- instead of the top-down model often associated with architecture.

That approach runs through much of Eliasson’s work, for instance in “The Parliament of Reality” at Bard College and in his 75-person studio that brings together experts from various disciplines. (When he talked to The Huffington Post, he was about to board a flight to Addis Ababa to consult on and develop new public space projects in Ethiopia's capital city.) 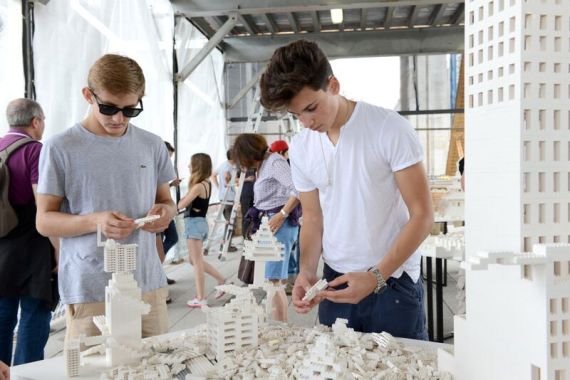 Perhaps most importantly, that approach to space provides a useful model for those concerned with the deepening divisions of New York City. It scales down negotiation to Lego blocks and makes collectivity a question of child’s play.

Eliasson’s theoretical grounding runs deep, and his lens is global, but his work manifests locally and simply. It moves the High Line walkers -- concerned as they are with rising rents or with social hierarchies -- just a bit closer to utopia.