The Delhi auto rickshaw driver stared at me in disbelief when I asked him to take me to Chandni Chowk. He asked, "Chandni Chowk?"

Giggling to himself, he turned back around and sing-songed, "Okaaay" and we took off down the road.

We drove in silence. Again, he chuckled to himself, "Chandni Chowk!"

I leaned into the front seat, "It's a good market to visit, yes?"

"Oh." I settled back in my seat and stared out the window. "Well. Hm. Well then."

Chandni Chowk, or "Moonlit Square," is an Old Delhi marketplace that one historical account suggests was designed over three centuries ago by the Mughal emperor's daughter, with a pool reflecting moonlight. It has been described as both "the city's soul" and "a study in chaos."

The hotel clerk had suggested other tourist-friendly sites, but when I asked where I could find genuine local culture, a place not selling McDonald's McPaneers and Starbucks Chatpata Paratha wraps, he agreed there was no better place. Then he instructed me to remove all personal possessions from my body and leave them in the hotel safe.

My auto rickshaw continued weaving through the traffic, its open sides allowing just enough time to soak in the street's action -- the single motorcycle stacked with a man, then child, then baby and lastly woman clinging in the back; the stray dogs jamming their noses into open grates, scurrying from cars clipping their tails; the young men bouncing down the street, their arms slung amiably over each other's shoulders; the harmony of hundreds of horns honking, not as suggestion, but rather the imminent fact: "I am barreling through, best get out of the way."

As we neared the market, the driver pointed to a red sandstone wall running over 1.5 miles around the remains of a Mugal fort. "Red Fort? You go there instead?"

"Not now, thanks. I'd still like to go to Chandni Chowk."

The driver laughed again, and turned onto a street swarming with pedestrians and lined with shops selling electronics, beaded saris and brilliantly colored fabrics. Many of the women wore shawls or scarves around their necks.

I quickly buttoned up my shirt, cursing the buttons for not going higher. 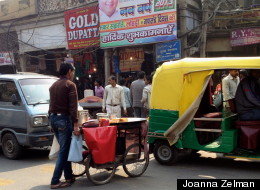 I stepped out of the rickshaw, hit by a waft of sweet curry spices, incense and dust. Acutely aware of my exposed neck, I decided on my first mission: Operation Find-a-Scarf. I scrunched up my shoulders, scootched up my collar and spotted across the street a bustling alley lined with fabric shops.

I stepped into the road. I jumped back as a rickshaw and car barreled through. I paused for a moment, studying how others were darting between cars and rickshaws and buses, three objects moving at three different speeds. Every time I boldly stepped into the street to start my trek, I hopped back, culminating in a back-and-forth jig in the street.

Entering the dark, unpaved alley, thin shops were stacked with fabrics, stalls sizzled with the smell of burnt sugar, a mesh of cables created an awning overhead, crowds of men rounded from even darker alleys as motorcycles clipped through -- the only warning of these motorcycles was the unsettling, sneaking suspicion that there was something behind you and it was about to mow you down. I trailed other pedestrians, stepping into their footprints in the mud, keeping pace with the flow of feet, trying to merge with the organized chaos. When I stumbled on the uneven path or slowed to look around, the current of people quickly swept me back in line.

I tried walking confidently like a local -- in New York, I rarely slowed down to examine store windows or read signs. Here, I resisted cocking my head, instead darting my eyes back and forth in search of a scarf, straining my eyeballs to extend their peripheral vision beyond their usual degrees.

I entered a shop. Inside, no one looked up from folding fabrics. Perhaps this was normal, or was I a tourist encroaching on local turf, just like those that venture beyond Times Square into my Brooklyn cafe?

"Excuse me, do you sell scarves?"

The storeowner led me outside and pointed down the alley to the left.

I walked a block to the left, past the sweet wafts of deep-fried-something-fabulous, entering a store lined with saris.

"Excuse me, do you sell shawls?"

"Saris here. Shawls in shop to the right."

I looked outside to the right, back at the store I had just come from. I retraced my steps to the right, pretending I had just spotted a friend to counter the appearance of a lost tourist wandering aimlessly (literally) back and forth.

I stopped into another nearby shop on the right.

"Excuse me, do you sell shawls?"

I let slip my bewilderment as I blinked at the storeowner in disbelief.

Wandering once more back to the left, the sweet wafts returned, coupled with crackling sounds of crunchiness. Hit by desperation-sparked sudden onset hunger, I paused at one of the stalls.

Two men stood behind the makeshift wooden stall amid pots of dough, vats of oil and huge pans resting behind the sticky counter of bowls piled with deep-fried sweets.

I pointed to a sticky, pretzel-shaped object in the pile.

The man behind the counter raised his eyebrows at me, perhaps assuming I was more the McPaneer-eating type: "Jalebi? 20 rupees."

The man pinched his fingers together to extract five sticky jalebis from the pile and plop them into a brown paper bowl.

I paid and walked away, tentatively lifting a jalebi with my fingers. I smelled it, then took a tiny bite, through the flaky, crisp, caramelized outer shell into the warm, sugar-soaked cake inside, my tongue flicking to catch a drip of escaping liquid sugar.

This was it. I was saddened, realizing that I had just peaked in sheer happiness, and life could only be downhill from here.

I chomped down the rest of the jalebi in two bites, overcompensating for my initial hesitant nibble. I resisted inhalation tempation for the remaining four, because holding the now sugar-soaked bowl in my hand, just like others gripping bowls around me, I felt a sense of ease. I fit in just a bit more; I was on the inside of this secret society of jalebi eaters. I wandered the streets gripping my bowl, my local ID, like a Brooklyn tourist who'd stumbled into a flannel shirt and suddenly belonged.

Empowered with my bowl, I sauntered into another store, quickly picked up a gray blanket or shawl or bedsheet and purchased it. I wrapped the massive blanket/shawl/bedsheet around my neck, and then around my neck two more times, until my head was just a tiny bobble of nose and eyes and frizzy hair poking out from a poofy gray blob. I fit in as much as this lost girl from Brooklyn was ever going to at Chandni Chowk.

Click here to read about my experience as a woman traveling alone in New Delhi.