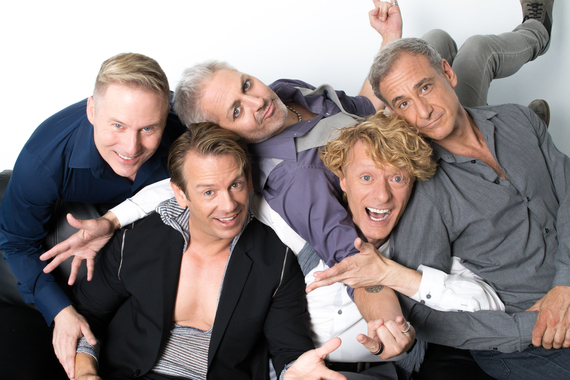 3: It's The Magic Number

"With Season Three I wanted to show (the guys) more in their professional settings," says Acord. He's currently neck deep in post-production work, preparing the show for its fall premiere, but with the end almost in site, and with a successful screening of the first episode at the Hot As Hell Web Series Festival in Palm Springs behind him, he can't help but anxiously await the day that everyone can see what he and his team have been working so hard on.

Seasons One and Two may have been about getting to know the Old Dogs and what it is exactly that makes them tick, but these next 8 episodes, according to the writer, "will explore how each man is also defined by his chosen profession." That means fans will get a chance to see Nathan in his element, especially during a Howard Hawks-worthy office scene involving Acord, Hart, Gari, and newcomer, Rutanya Alda, that is destined to be an ODNT classic (The Mommie Dearest star, who is based in NYC, happily agreed to be part of the series because of the "universal questions" that it raises about life and love and sex, and calls the experience "great.")

They can also expect to see another side of Brad King this season, after an unforeseen crisis forces the one-time musician to finally examine his aptitude for anything other than penis-play. For his part, Bonnem relished the chance to "expose another layer of the character"-- as did Olson, whose Muscles goes through a bit of his own existential crisis when confronted with the very real concept of beauty being in the eye of the beholder. And Ross... well, let's just say that his professional woes are what brings out the beast in Nathan, not to mention the comedy pro in David Pevsner, who even has a scene opposite Absolutely Fabulous star and improv legend, Mo Gaffney. (According to Pevsner, "(Gaffney's) so damn funny. It was great to be the straight man to her... no pun intended.")

And then there's Nathan, who after WeHo Horror Story, is still struggling to move on from his fickle young lover... The forlorn talent agent might actually be able to do so this season, if the mysterious and dashing Jake Tyler (Curtis Wayne Brown) has any say in the matter, but that's all I can reveal about this major story arc, though Acord will admit that the change of pace has been refreshing: "They say that with every relationship there's a gardener and there's a flower," he says. "And with Damian, Nathan was the gardener, and it's been really fun to play scenes now with Jake and get to be the flower."

One thing is for sure, Leon's potential new onscreen beau can't speak highly enough about him, praising Acord's own prowess at improv and calling the experience "such a pleasure to be a part of." And truthfully, that's the general consensus from everybody whom I spoke with-- who has been fortunate enough to be a part of this singular series. As our final conversation comes to an end, I ask Acord about his plant metaphor, wondering who he considers himself to be in his own marriage, and he immediately labels Laurence the gardener. But then, without missing a beat -or betraying that Midwest modesty - he lets it be known that he's "a hearty house plant, not a temperamental exotic flower."

It's perhaps the perfect description of the actor/writer/producer/director--a sensitive if sturdy presence; one that, while certainly requiring some extra TLC, somehow always remains cognizant of its roots, even while perpetually searching for the sun. I wonder if that's the reason that despite all of the sarcasm and wicked wit that it offers up about LA living, dating beyond 40, and aging as a gay man, Old Dogs & New Tricks never feels bitter, or elitist, or worse, jaded.

When I refuse to let him deflect my thinly veiled compliment, Leon Acord thinks for a minute and then offers up this final thought: "I guess the thing that keeps me from going too far with the show is this innate need for it to be camp but not too camp. I want it to be snarky, but I don't want it to be cynical. I don't really have hard and fast guidelines. I just kind of feel my way as we're doing it."