If you're like me, you've probably never seen that word. If you have, you probably haven't read or heard it in awhile. However, bad trends have a way of coming back, literally. On May 1st, Old Navy trended on Twitter for most of the day, and not for a good reason. When I saw why it was trending, I grabbed my dictionary, sang the alphabet song, and found what I was looking for.

Miscegenation is defined as the interbreeding of people from different racial backgrounds. It was mostly used before and during the Civil Rights Movement in the context of anti-miscegenation laws; laws that prohibited interracial couples to marry.

It wasn't Old Navy who taught me this word, but a cyber mob of Twitter users attacking Old Navy. Why did so many people feel the need to attack an All-American clothing retailer?

This is a beautiful, fake family, one that resembles many real American families today. It's something that many people scroll through without noticing race, at least that's what I thought.

Like most people, I know that racism still exists. However, I was foolish in thinking that 58 years after Mildred and Robert Loving were arrested for miscegenation and successfully battled their case in the Supreme Court, people accepted marriages without thinking of race.

Had I done my research, I wouldn't have been so shocked. The last state to overturn such a law was Alabama in 2000. That's right, laws prohibiting people of different races to marry were not abolished in the United States until the 21st century. That's not even an entire generation ago.

So, I started thinking about racism in the U.S. on a deeper level, something I've been doing more and more since the beginning of the primary election season. Now, candidates like Donald Trump and Ted Cruz and their rhetorics are not to blame for negative race relations in the U.S. In fact, they may have done us a favor. They exposed the hidden racism and bigotry that still exists in the U.S. Their hate speech has allowed generations of Americans to come out of the bushes, Americans who still believe in white supremacy. The same Americans who attacked Old Navy for their ad. Here are the top comments under Old Navy's tweet - 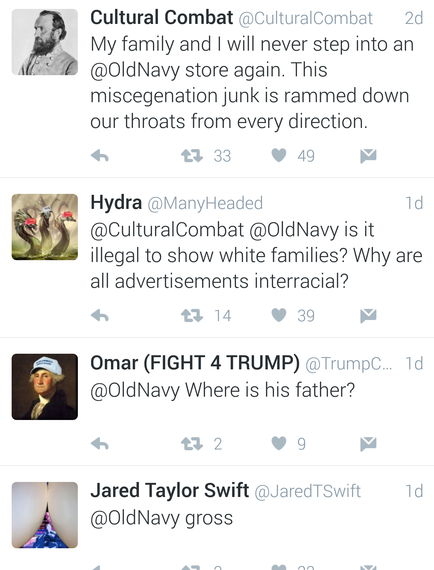 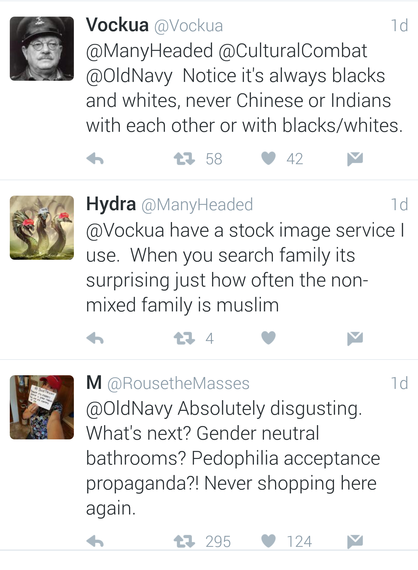 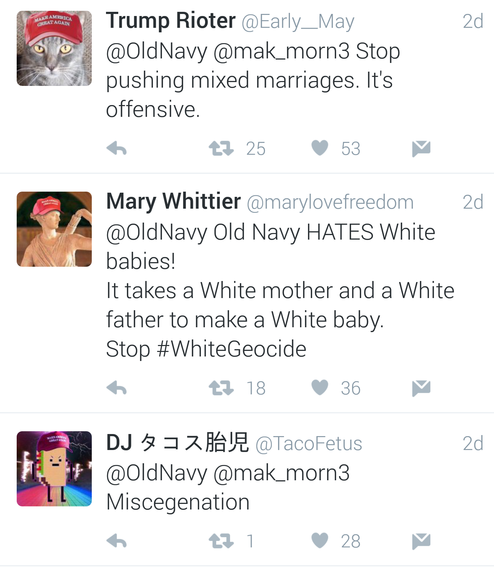 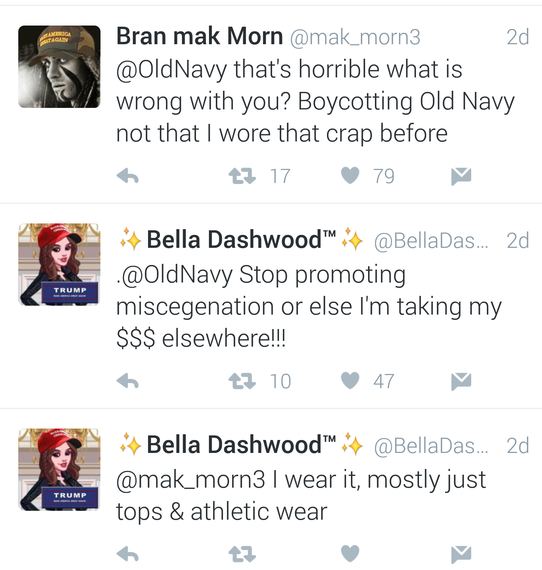 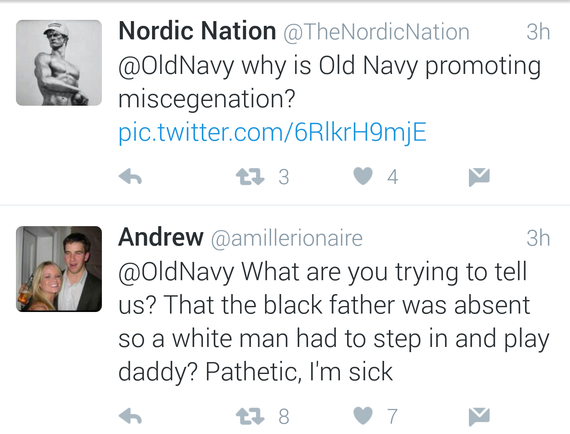 Is racism in the U.S. dead? Obviously not.

But if it was only 16 years ago that laws prohibiting interracial marriage were completely abolished, we shouldn't expect it to be. Racism is alive and well, people were just better at hiding it in the 21st century until Donald Trump made it okay. I mention Donald Trump because most of the commenters (there's a lot of them) were Trump supporters. His angry rhetoric has given people the confidence and approval to be openly racist. It's almost sad to think the progressive America we're proud of could be a mere façade.

However, there is a silver lining. Even though many every-day Americans may still hold these terrible values, many famous American companies like Old Navy have recently begun providing a more accepting and realistic image of 2016 America. They don't just include interracial families either, but also depict Muslim families, families with same-sex parents, and mixed families.

These are some of the commercials that made headlines:

Cheerios received the most backlash for their commercial, which speaks to how deep racism in America runs. A mixed family having breakfast shouldn't have caused an uproar, much like Old Navy's tweet shouldn't have. But they did, and that's because acknowledgment and representation are different.

Representation is everything. The only people who complain about representation are the ones that already have it. Seeing these ads pop-up on social media, televisions, and billboards make every American feel like they have a place in this nation.

The negative side to that is it could possibly give us false hope. Maybe progressive commercials will be enough to expel racism from the U.S., or maybe stronger intervention is necessary. It's hard to come up with a simple solution, but it's not hard to see that racism in the 21st century has catapulted to a whole new level. This is evident by the fact that a term that hasn't been used in everyday language since the Civil Rights Movement, has resurfaced.

When I told my 17-year-old brother what the word meant, his response was, "That shouldn't even be a word".

Until yesterday, that's exactly what the word miscegenation was to many people - nonexistent. To give this concept a word means we see marriage as something other than universal, regardless of our skin colors.

Which begs the question - what does it say about the place we're in as a nation if we're reverting back to these words and ideas?