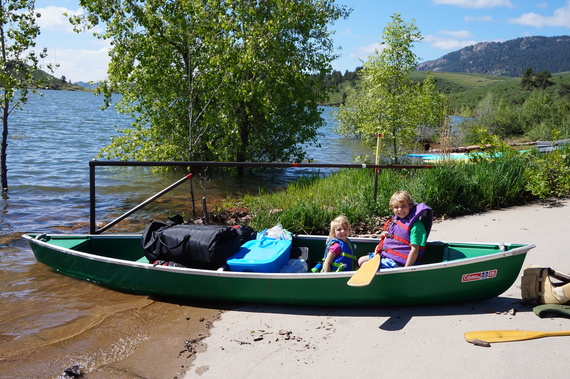 There's an heirloom of sorts sitting in my garage. It's not a necklace or a quilt, but something less traditional: a 15-foot Coleman canoe. It was my family's boat when I was a child growing up in the Midwest, and I have memories of paddling with my parents and sister, fishing in the lush state parks of Northern Wisconsin or in the deep clear lakes of the Sylvania Wilderness in Michigan. It's these types of childhood experiences that I believe shaped me into the adult that I am today; a free-spirited outdoorsy type who has made a home in the foothills of Colorado.

Recently, something compelled me to take the canoe down off its shelf. Maybe it's because I'm a mom now myself -- my kids are 8 and 4. It felt like it was time to share the experience. Pass along the tradition. Maybe it'd stick, or not.

As an ambitious first step, my husband and I decided we'd book a boat-in campsite at a reservoir near our house, one that's only accessible from the water. I thought: What could be more novel than floating in to our campsite? How idyllic. It would be just like my own growing-up. Logistically, we didn't exactly know how we were going to get four people and camping gear into one canoe, but we'd figure it out. Right?

The day before our trip, my husband and I realized we most definitely had not figured it out. We took a look at our mountain-sized pile of gear -- a feeling that's become familiar since having children -- and realized it wouldn't be feasible. One boat would not be enough. If we tried it, we would risk capsizing.

Wracking my brain for a solution, an idea popped up. I'd been dabbling around with Stand-up Paddleboarding and had become pretty comfortable on both lakes and the ocean. Why not rent a board for the weekend and add a new tradition to the mix? This would allow me to paddle in on my own, opening up significant space in the canoe, and our eight-year-old son could handle the front of the canoe -- my usual spot. But was he strong enough? Enthusiastic? We hoped for the best.

The trip began with a striking azure sky, glimmering leaves, and a short "How to paddle a canoe" orientation with our son in the parking lot. Although it was clear he was only half listening, he seemed to mostly get it. The true test would happen on the water. We unloaded our trunk and things fit inside the canoe. It floated. This was an encouraging start.

It was then that we looked past the sunshine to notice the head wind. Or felt it, actually. At the edge of the water, the wind blew our hair back in knots and created some good-sized waves. Although the distance to our campsite looked very short on our map--it was only a couple of coves away -- the wind, coupled with lots of gear, children paddling, and speedboats whizzing by, made for a solid, somewhat hair-raising paddle.

But we kept with it, me paddling on my knees when the water got really choppy, all of us encouraging our son, who was a little bit freaked out, and my husband muscling it out. It felt sort of epic.

The reward was worth the effort: We had a beautiful campsite, right on the water, with views of a state park behind us; red rock against verdant hillsides. My husband and I set up the tent while the kids explored the area, taking photos of geese and their goslings and splashing around in the water. Very quickly, we were all in our swimsuits, soaking in some much-needed Vitamin D, lazing around in camp chairs, munching on yogurt-covered pretzels and raisins, and reading books.

It wasn't long before my son became curious about the paddleboard. In typical kid-fashion, he was up and standing in a flash, no training necessary, paddling around, navigating the half submerged Aspen nearby. His sister, not one to be left behind, convinced him to pull her behind him in a floatie while she fished with her pink princess fishing pole. An hour later, she tried out the board, standing up for a few minutes at a time and testing her balance.

Soon, various boats began to file into the cove in front of our campsite, a combination of fishing boats, svelte cruisers, kayaks, and mini yachts. A few groups were having spring-break-like dance parties on their decks. It was an eclectic scene, an interesting mix of people enjoying the outdoors in their own way. It made me think there were so many things we could try, maybe bringing kayaks out next time, or even renting a pontoon with friends.

That evening, when everything quieted down and it was late dusk, after we'd eaten our dinner and S'mores around our campfire, we all piled into the canoe and pushed away from shore to float under the almost-full moon. The water was glass. Fish jumped in the distance. A few stars glittered above us. Dozens of frogs sang a loud chorus. It reminded me a lot of Wisconsin, those peaceful nights camping near lakes with my parents and sister. And now it was my own husband and children.

My son pierced the silence with a question. "When are we going home?" he asked.

He paused and then sighed. It was enough affirmation to know that this adventure in our heirloom-canoe-plus-paddleboard--merging old and new--would be a new tradition moving forward.

*This post first appeared at Thought Catalog and a version also appeared at the Fort Collins Coloradoan.