Rick Rickman grew up knowing no matter what your age, you can be vital and engaged.

His grandfather showed him that. He retired and had two more careers -- as an auto mechanic and an architect. But Rickman didn't know many others who had role models like his grandfather.

Rickman became a photojournalist and won a Pulitzer Prize in 1985 for his shots of world-class athletes at the Los Angeles Olympics. Soon after, he began taking pictures of "senior athletes." They were swimmers, shot-putters, archers, bodybuilders, and surfers who showed aging doesn't stop athletic achievement. 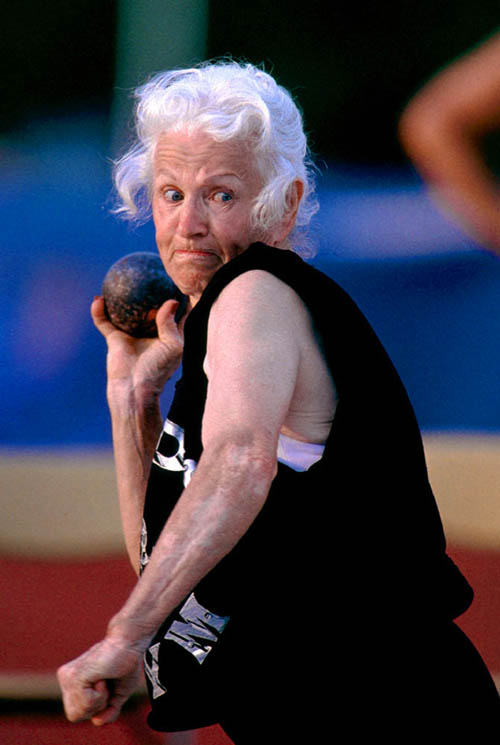 Rickman kept busy as a commercial and documentary photographer. But he continued to photograph and befriend the older athletes in his spare time. Many of the images and their stories are collected in a new book, The Wonder Years: Portraits of Athletes Who Never Slow Down, from Chronicle Books.

Rickman, now 58, will go to Vancouver to shoot the 2010 Winter Olympics. Recently, I caught up with him in Southern California, where he was enjoying the holidays and some free time in Laguna Niguel, his home base.

AR: Tell me about the first time you realized this was an important subject.

RR: After I won my Pulitzer, I did some talks. At one a young woman asked me: did I feel badly about taking pictures of older people doing things that might hurt them? And it intrigued me that somebody could believe if you're old and active that you might hurt yourself. I felt like I needed to do something to change that view. So I figured I'd take pictures of older people doing exciting and active things.

AR: Did you think they would become a book?

RR: For the longest time I would take these pictures and I'd try to get magazines to take a look and they really didn't want a part of it. Getting old still scares people. So I never figured it would become a book.

AR: What is your favorite photo in the book?

RR: For me, it's like when you take pictures of your friends. It's hard to separate your friends from the pictures. But there are a couple I really like.

There's a shot of Janet Friedman, a swimmer who was the first woman that I spent a lot of time with for this project. I met her at the National Senior Games one summer and just found her such a good spirit. 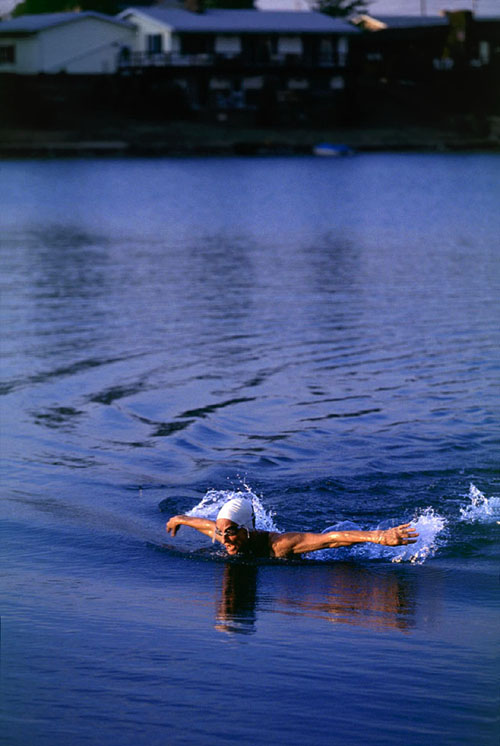 She's doing the butterfly in a pond behind her house in a little town in Napoleon, Ohio. And I love that picture, because you see the intense muscle structure in her shoulders. And the light is really pretty.

There's another of an 84-year-old archer who has severe osteoporosis. Her back is arched and she has real trouble raising her head. She had to convince her assisted living facility to let her practice. They thought she'd hurt herself. I love that picture. It shows the effect of time on her body but it also shows her determination not to let it stop her.

AR: How'd you come up with the book's title?

RR: I have always said people over 60 engaging in fun pursuits were living "The Wonder Years." So the title just came easy. It just seemed to be a natural fit.

AR: You wrote the book with Donna Wares. Tell me about how you two got together.

RR: I had been shooting these people for about twenty years. A friend suggested I meet Donna. She had never seen the photos before and she was particularly fascinated. She suggested that we put together a proposal for publishers. Donna also said, "Who would you like to send it to most?" I said, "Chronicle Books." We sent it off and the next week we got a call back.

AR: I know you've been photographing older athletes all around the country. Do you notice a difference regionally among them?

There's one huge similarity I found. They are Type-A folks who are really interested in personal and professional improvement. They want to be healthier so they train consistently, continuously. I think the difference is the kind of sports that they do. On the East Coast, you find a lot of people who play hockey. On the West Coast you find surfers and volleyball players. It's different sports, but similar intensity.

AR: Did you photograph any Southern Californians?

RR: Bill Cunningham and Jane Hesselgesser are bodybuilders and personal trainers. Bill is 73, Jane is 68, and their physiques are phenomenal. 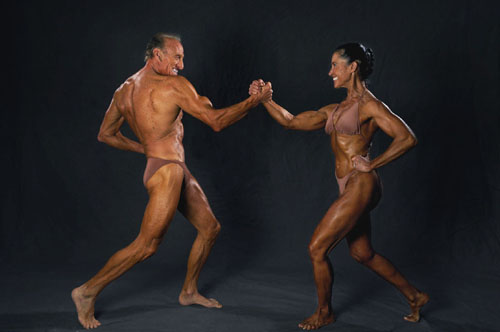 The form and structure in those bodies are so interesting. I love that picture.

There's also one of my surfing buddy, [Eve] Fletcher. I surf with her at San Onofre State Beach three times a week. She's on a wave, all dressed up. And she's all lined up and she's in perfect form. 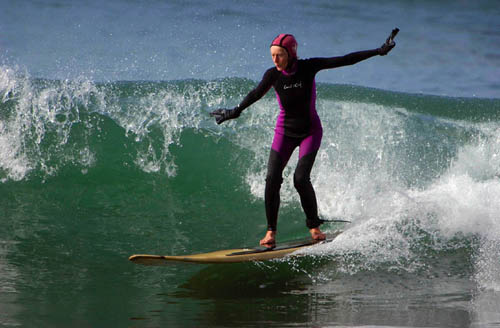 AR: Do you think the fact that so many of these guys are engaged in competition is important? I'm trying to separate the fitness from the competition aspect.

RR: I think that the competition almost becomes social. They get to meet a lot of people who are doing similar things. In that way they get reinforcement and social verification. But I think it's just the training and staying healthy, the activity, that really helps them.

RR: This network that has been so under the radar for so long. Thirty years, maybe longer. Take Miss Senior America, where these women who had never really been in beauty pageants before get together and they compete for a title. They wear evening gowns and show off these great figures and their talents. Some sing, some dance, some perform. It's amazing.

AR: How is your life different because of this project?

RR: Some of these people that I photograph have diabetic issues. Some of them have joint issues. Osteoporosis. These are are all supposedly debilitating diseases. And even with those limitations, these guys are out there tearing it up. That's made me much more confident about life in general.

I cover the waterfront