Art may be a lot older than we ever imagined.

In 2009, scientists working in South Africa were stunned to discover rocks that bore engravings made by humans around 100,000 years ago.

But those etchings seem practically modern compared to the zigzag design carved on the surface of a mollusk shell that researchers recently stumbled upon while rummaging through a set of fossils collected in Indonesia in the late 1800s.

The geometrical engraving is believed to date back 430,000 to 540,000 years, making it the oldest such artifact ever found. 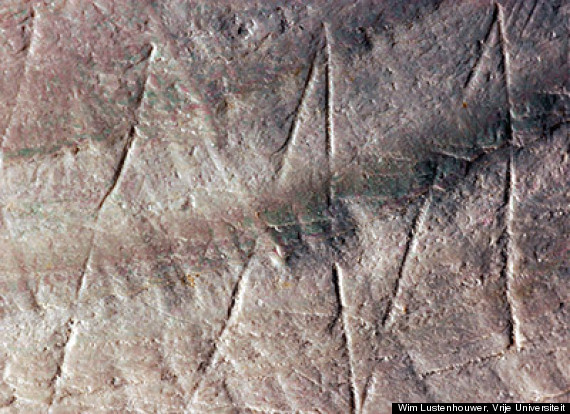 The zigzag marking found on an ancient mollusk shell.

The design was likely made using a shark tooth while the shell was still fresh from the water, so that it once appeared like white lines on a black background. The researchers believe it was the work of a Homo erectus.

Homo erectus is an extinct hominid species that lived from around 1.9 million years ago to about 150,000 years ago.

Finding such an ancient artifact is pretty spectacular in its own right. But the find also suggests Homo erectus may have been smarter than previously thought, the researchers say.

"We as humans tend to be a bit species-centric—we think we are so great and they must have been a bit more stupid than us, but I'm not sure," Dr. José Joordens, lead researcher and an archaeologist at the university, told Live Science. "We need to appreciate the capacities of our ancestors a bit more."

As for the meaning behind the strange zigzag? That remains a mystery. In fact, the researchers are a bit hesitant to call it art just yet.

"What was meant by the person who did this, we simply don't know," Joordens told Nature News. "It could have been to impress his girlfriend, or to doodle a bit, or to mark the shell as his own property.”

Joordens and her colleagues hope to return to Indonesia to look for other artifacts that may have been left behind by members of the Homo erectus species.

The research was published online on Dec. 3 in the journal Nature.

For more about the research, check out the video below: