HONOLULU -- The oldest known wild bird in the U.S. is a new mother. A U.S. Fish and Wildlife Service biologist spotted the Laysan albatross that's at least 60 years old a few weeks ago. It was with a chick at Midway Atoll, a remote wildlife refuge 1,300 miles northwest of Honolulu.

A U.S. Geological Survey scientist first banded the seabird as she incubated an egg in 1956. She was estimated to be at least 5 years old at the time. The albatross has since worn out five bird bands.

Bruce Peterjohn, the chief of the North American Bird Banding Program, said the albatross is the oldest wild bird documented by the 90-year-old bird banding program, which is run by the U.S. Geological Survey, the Fish and Wildlife Service, and Canada.

"She looks great," Peterjohn said in a news release Tuesday. "To know that she can still successfully raise young at age 60-plus, that is beyond words."

The bird, named Wisdom, has likely raised at least 30 to 35 chicks during her life, Peterjohn said.

Albatross lay just one egg a year. But it takes most of a year to incubate and raise a chick, and the seabirds sometimes take a year off from parenting after successfully raising a fledged bird. 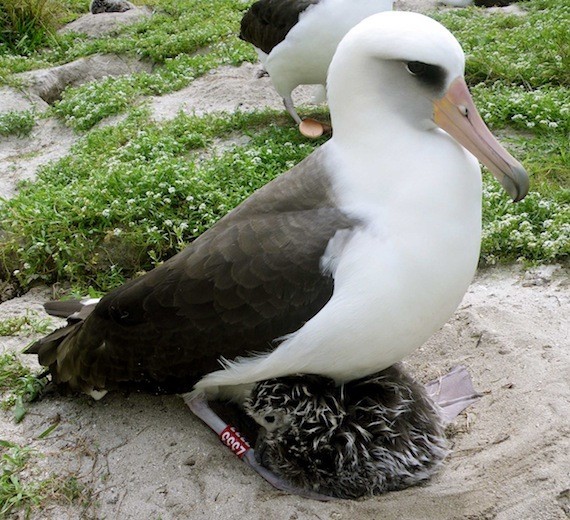