When scientists discovered beautiful hand stencils painted on the walls of an Indonesian cave back in the 1950s, they thought the artwork was about 10,000 years old.

But a new analysis shows that the artwork from the Sulawesi cave is about four times older, dating all the way back to 40,000 years ago.

That places the hand paintings among the oldest art ever discovered -- a finding that challenges the traditional view that creative art first arose not in Asia but in the West.

“It allows us to move away from the view that Europe was special,” Maxime Aubert, an archaeologist at Griffith University in Queensland, Australia and the leader of the team that did the analysis, told Nature News. “There was some idea that early Europeans were more aware of themselves and their surroundings. Now we can say that’s not true.” 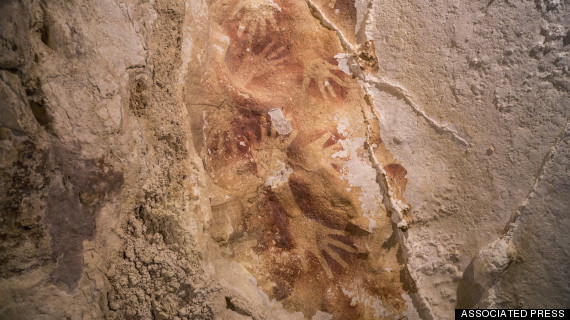 This undated handout photo provided by Nature magazine shows stencils of hands in a cave in Indonesia.

To determine the age of the stencils, the researchers used a method called uranium-thorium dating. Out of a dozen drawings found in the cave, one handprint dated back 39,900 years. A detailed drawing of an animal called a "pig-deer," was found to be 35,400 years old, making it possibly the earliest figurative depiction ever found, according to the New York Times.

Previously, hand stencils found in the El Castillo Cave in northern Spain were believed to be the world's oldest. They date back 37,300 years. A "red disk" in the cave is said to date back 40,800 years.

Scientists say the new finding suggests at least a couple of possibilities about how art arose. One is that early humans started creating art around the same time in different areas. Another is that they inherited the ability from a common ancestor in Africa.

In any case, the newly dated cave stencils wowed scientists.

"What this tells us is that when humans began moving out of Africa they were not all that different from us in terms of their abilities to use art and symbol," paleoanthropologist John Shea of Stony Brook University in New York, who wasn't part of the study, told the Associated Press. "Inasmuch as many of us would have difficulty replicating such paintings, they may even have been our superiors in this respect."

The research was published online on Oct. 8 in the journal Nature.