In 2007, an international team first reported discovering the tiny gems, which hid in pockets inside zircon crystals from Western Australia's Jack Hills, in the journal Nature. But it turns out that the gems weren't actually diamonds, but polishing paste, smushed into hairs'-width cracks when the zircons were prepared for laboratory tests, according to a study published online in the Feb. 1, 2014, edition of the journal Earth and Planetary Science Letters.

Scientists at the University of California, Riverside (UCR) found the mistake by snapping pictures of the disputed diamonds with a powerful transmission electron microscope, along with other techniques. Instead of bumpy real diamonds, they discovered sharp-corned synthetic diamonds embedded in polishing compound.

"There can be no doubt of the images we show," said Harry Green, a UCR research geophysicist and study co-author. "Polishing the specimens with grinding compound that was made of diamonds was a terrible mistake."

The original authors, who provided their samples for analysis by Green and lead study author Larissa Dobrzhinetskaya, also agree with the conclusions.

"Back then, we were convinced that the diamonds are real due to apparently clear evidence," said Thorsten Geisler-Wierwille, co-author of the 2007 study. "We agree with the final conclusion of Dobrzhinetskaya and co-workers." 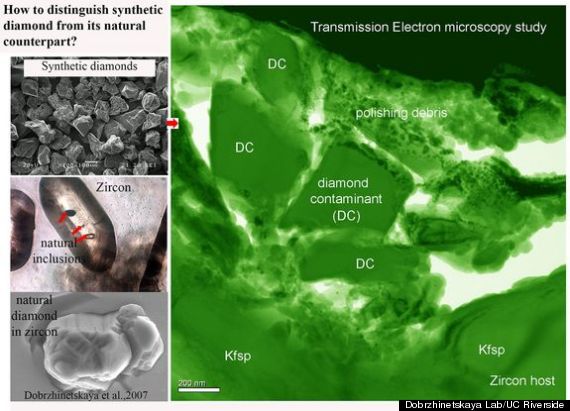 This image shows the difference between synthetic diamonds and natural diamonds, and a close-up of polishing debris found in ancient zircons from the Jack Hills in Western Australia.

Zircons are the oldest evidence of rocks on Earth's surface — tiny but tough survivors of the planet's hellish early years. In the 1980s, scientists discovered Jack Hills zircon crystals as old as 4.4 billion years within 3-billion-year-old conglomerates, a sedimentary rock similar to pebbly stream deposits. Because the zircons are much, much older than the conglomerate, the minerals must have washed into the conglomerate, eroded out of Earth's oldest rocks. [Have There Always Been Continents?]

A single Jack Hills zircon is like a time capsule from the beginning of the Earth. The crystal's microscopic bubbles and inclusions trap elements that hint at the composition and atmosphere of the young planet. Even though the Jack Hills rocks have been buried, heated and squeezed in the past 3 billion years, scientists have shown that zircons can emerge from these metamorphic processes relatively unscathed, preserving their original history.

"These zircons are of extraordinary importance," Green said.

So it was a big deal when the international team, led by German geochemist Martina Menneken, reported discovering diamonds inside Jack Hills zircons. The findings, published Aug. 23, 2007, in the journal Nature, reported bits of diamonds ranging from 4.3 billion to 3.1 billion years old within individual zircons. Most diamonds were just a few times wider than a human hair.

The presence of diamonds meant the young Earth was cool enough to make relatively thick continental crust. Many modelers have suggested that Earth was covered by a roiling lava sea for its first 500 million years — an era called the Hadean, for its hellishly hot temperatures. But diamond means that the surface was cold enough to crystallize miles-thick chunks of rock, under which diamonds form. The findings also supported the idea that plate tectonics was in motion, with plates of crust skidding about and colliding, creating the pressures that form diamonds.

But some scientists, including Dobrzhinetskaya, were suspicious of the findings, because Menneken and her colleagues polished the zircons with diamond paste. They also found it hard to believe that a single zircon could have diamonds that ranged in age across more than 1 billion years.

"The story was extraordinarily difficult to buy," Green said.

Contamination from diamond-polishing paste is a common problem for a different group of diamond experts — those who specialize in studying ultra-high-pressure rocks. These are some of the most extreme rocks on Earth, forged at great pressures in tectonic collision zones and then brought to the surface. Diamonds are a key clue to hunting down these ultra-high-pressure zones.

Dobrzhinetskaya is an expert in ultra-high-pressure diamonds, with a suite of high-tech equipment specially tuned for analyzing these minerals. Several years ago, she asked the German researchers to let her test the Jack Hills zircons, and the team willingly agreed.

"We were also interested in [transmission electron microscope, or TEM] results and, at that time, had no possibility to perform TEM investigations by ourselves," Geisler-Wierwille told LiveScience in an email interview.

The UCR scientists discovered the size and shape of the diamond crystals were more similar to those seen on angular synthetic diamonds. Instead of growing in place, with interlocking fingers grasping the zircon, the diamonds simply sat in their voidlike homes. The diamonds were also surrounded by flecks of minerals that matched the composition of the polishing compound and epoxy resin used in the German lab that prepped the zircons. [Oops! The 5 Greatest Scientific Blunders]

"These things are diamond paste," Green said. But the collaboration broke down when it came time to publish the results. While both groups agree that polishing paste got inside the Jack Hills zircons, Geisler-Wierwille thinks that there still could be early-Earth diamonds embedded more deeply, in the core of the zircon crystals, which are only about as wide as mechanical-pencil lead (0.3 millimeters).

Green strongly disagrees. "They can go back to their cache of Jack Hill zircons and make new specimens," Green said. "If you're a betting person, I'll make you a bet that they won't find it. There have been an enormous amount of [Jack Hills] zircons analyzed in a bunch of different ways, and no one has ever found diamonds." 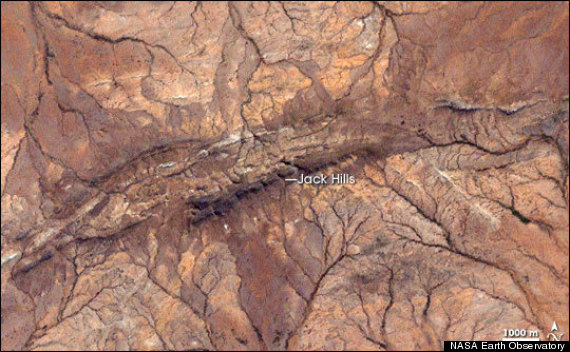 Western Australia’s Jack Hills appear as little more than a charcoal-tinged ridgeline in this image captured by the Landsat satellite July 27, 1999.

Indeed, the German team went back and picked through about 1,000 zircons in search for more diamonds from their samples and didn't find a single microscopic gem. (They do report finding graphitelike carbon, but that's another story in itself.)

Based on the TEM images, both groups agree the "diamonds" cited in the 2007 Nature paper come from polishing-paste diamonds. But because of the disagreement over whether diamonds could be found in other zircons, Geisler-Wierwille's group declined to add their names as co-authors on the study by Dobrzhinetskaya and Green. Instead, the German-led team wrote their own paper, using similar methods.

But both studies were rejected when submitted for publication in scientific journals. Dobrzhinetskaya's was rebuffed by Nature and Geisler-Wierwille's (with Martina Menneken as first author) by the journal American Mineralogist.

Nature declined to comment on the rejection. However, Green said reviewers agreed with Geisler-Wierwille — there was a possibility that some zircons held real diamonds. (Outside experts review studies for research journals and provide their opinion on whether it is worthy of publication.)

But at Earth and Planetary Science Letters, reviewers agreed there was no wiggle room, said Mark Harrison, a geochemist at the University of California, Los Angeles who serves on the journal's editorial board and accepted the paper for publication.

"I had three people review Larissa [Dobrzhinetskaya]'s paper, and nobody could see any way out of it," Harrison told LiveScience. Harrison is also an expert on Jack Hills zircons, and he said he has analyzed thousands of the zircons without ever finding a diamond.

Because the Jack Hills diamonds have been used to support models for early Earth cooling, Harrison hopes the new study corrects the record. "It's important that people stop wasting their time," Harrison said. "The early Earth was called Hadean for a reason. Personally, I disagree with that because I think we've found legitimate [zircon] inclusions of other low-temperature minerals, but I don't think we've found diamonds."