The earliest probable case of Down syndrome in the archaeological record comes from a 5- to 7-year-old child who lived in medieval France some 1,500 years ago, new research shows.

The child, who is also the youngest example of the condition in the archaeological record, likely was not stigmatized in life, given that the body was treated in a similar way to others buried at the site, researchers say.

Archaeologists originally discovered the skeleton of the child in 1989, when they excavated it along with 93 other skeletons from a fifth- to sixth-century necropolis located just south of the Abbey of Saint-Jean-des-Vignes in northeastern France. Researchers had suspected the child may have had Down syndrome, but they hadn't performed a rigorous analysis to confirm the diagnosis. [See Photos of the Remains of an Ancient Plague Epidemic]

So Maïté Rivollat, an archaeologist at the University of Bordeaux, and her colleagues studied the skull of the child, and took a computed tomography (CT) scan of it to understand its internal features.

"Two earlier publications just mentioned the possibility of Down syndrome without [conducting] a detailed study," Rivollat told Live Science in an email. "The [CT] scan was a new possibility to approach the intracranial aspect of that skull."

Down syndrome is a genetic disorder in which a person has an extra copy of chromosome 21. People born with Down syndrome typically have intellectual disabilities, physical growth delays and certain facial features, including a flat nasal bridge and almond-shaped eyes that slant upward.

British physician John Langdon Down first described Down syndrome as a unique disorder in 1866. Despite this relatively recent identification of the condition, paintings and sculptures have depicted Down syndrome for centuries.

For instance, the earliest depiction of Down syndrome may come from Olmec figurines from Mesoamerica that date as far back as 1500 B.C., according to a 2011 study on the history of Down syndrome published in the Journal of Contemporary Anthropology. 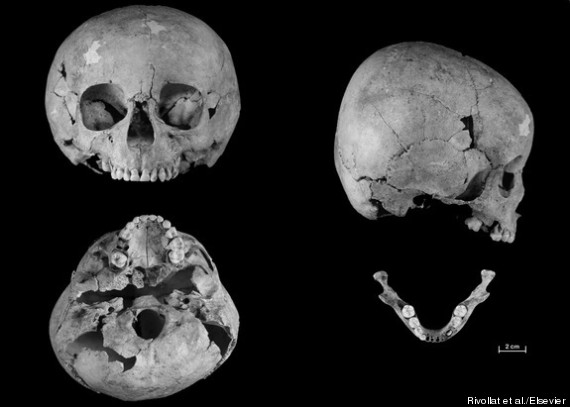 The skull of a 5- to 7-year-old child (shown here) who lived in medieval France shows signs of Down syndrome; for instance, the skull was short and broad, and flattened at the base.

To see if the Saint-Jean-des-Vignes child really had Down syndrome, Rivollat and her team studied the dimensions and structure of the child's skull and compared it with the skulls of 78 other children of similar ages. Their analysis showed the French child had numerous features indicative of Down syndrome, which the other skulls lacked.

For example, the skull was short and broad, and flattened at the base. In addition, it contained thin cranial bones and certain extra bone pieces. The child also had some sinus and dental abnormalities, which aren't diagnostic of Down syndrome on their own, but are indicative of the disorder when considered along with the other characteristics, the researchers point out in their study, published online last month in the International Journal of Paleopathology.

The archaeologists also studied the way in which the child was buried to obtain clues about how he or she was treated in life, something scientists weren't able to do with other ancient cases of Down syndrome. Just like other skeletons in the cemetery, the child was placed face-up in its tomb, with its head pointing west and feet pointing east, and its hands situated under its pelvis. That is, the child's burial treatment was no different from that of other people in the cemetery, Rivollat said.

"We interpret this as meaning that the child was maybe not stigmatized during life, the first time a Down syndrome individual has been so viewed in the context of the ancient community," the researchers write in their study.