Archaeologists have uncovered the remains of the fort built by gold-hunting Spanish conquistadors in the 16th century and say it's the oldest European garrison ever found in the interior of the United States.

The settlement around Fort San Juan was occupied for less than two years and it met a rather bloody end — likely brought on by the Spaniards' botched bartering for food and their sexual transgressions with Native American women. But the short-lived fort's traces serve as a reminder of how different U.S. history might have been if Spain had been more successful in its early colonial campaigns. [In Photos: Amazing Ruins of the Ancient World]

The garrison was built by Spanish Captain Juan Pardo and his men in about 1567 near what is today Morganton in western North Carolina, about 300 miles (482 kilometers) inland. It is thought to be the first and the largest of the forts that Pardo established in an attempt to colonize the American South. It's also the only one to have been discovered so far.

"Fort San Juan and six others that together stretched from coastal South Carolina into eastern Tennessee were occupied for less than 18 months before the Native Americans destroyed them, killing all but one of the Spanish soldiers who manned the garrisons," University of Michigan archaeologist Robin Beck said in a statement. 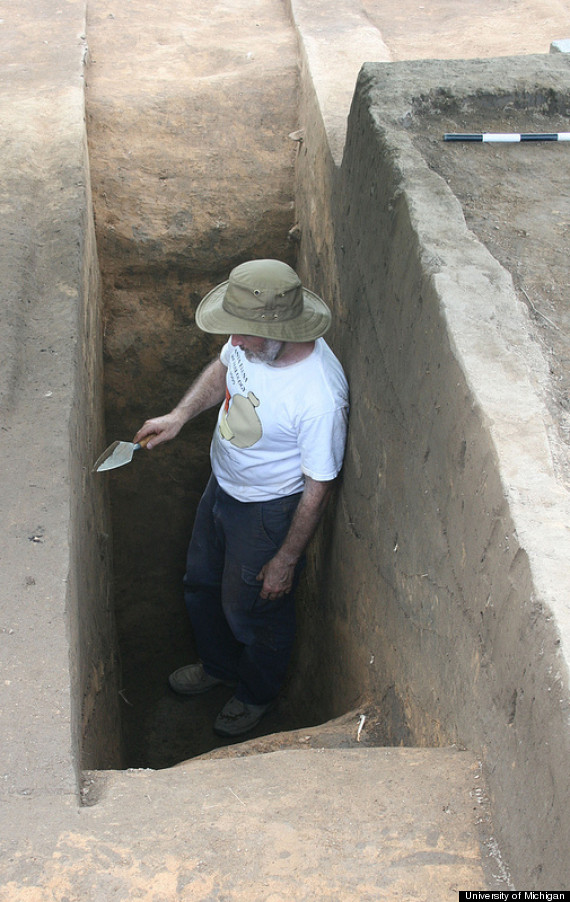 This photo shows archaeologist Robin Beck at the base of the Spanish moat, part of a garrison nearly 450 years old that was recently uncovered in North Carolina.

The fort was located at the Native American site of Joara, part of the mound-building Mississippian culture. Previous excavations had revealed evidence of a European presence at Joara, including houses occupied by Spanish soldiers.

"We have known for more than a decade where the Spanish soldiers were living," another excavator, Christopher Rodning of Tulane University, explained in a statement. This summer, the team returned to learn more about the Mississippian mound at the site, but last month, their excavations inadvertently exposed part of the fort.

"For all of us, it was an incredible moment," Rodning said.

In addition to excavations, the researchers used techniques like magnetometry to probe the site. This allowed them to detect features buried below the surface, including the fort's graveled entryway and V-shaped moat, which measures 5.5 feet (1.7 m) deep and 15 feet (4.5 m) across. Among the artifacts found at the site were nails, tacks, pottery and an iron clothing hook for fastening a jacket or attaching a sword scabbard to a belt, the researchers say.

As for the size of the fort, the researchers are not sure.

"We are not yet sure of the fort's dimensions. That will be one of the surprises," Beck told LiveScience. The team has exposed about 60 feet (18 m) of the 15-foot-across moat, and they suspect another 100 feet (30 m) of moat or palisade will link up with the now-exposed section, he added. [Gallery: The 10 Strangest Places on Earth]

The Spaniards were actively prospecting for gold while they occupied the site, though they never found the goldmines that would make North Carolina's settlers of the early 1800s rich. Archaeologists believe the colonizers' downfall was brought on by their own presumptions about how to trade with the Native Americans.

"The soldiers believed that when their gifts were accepted, it meant that the native people were their subjects," Beck said in a statement. "But to the natives, it was simply an exchange. When the soldiers ran out of gifts, they expected the natives to keep on feeding them. By that time, they had also committed what Spanish documents refer to as 'indiscretions' with native women, which may have been another reason that native men decided they had to go. So food and sex were probably two of the main reasons for destroying Spanish settlements and forts."

England exploited Spain's failure when they established Jamestown in 1607, putting in motion the American frontier narrative that's in the history books today, another archaeologist, David Moore of Warren Wilson College, explained in a statement. 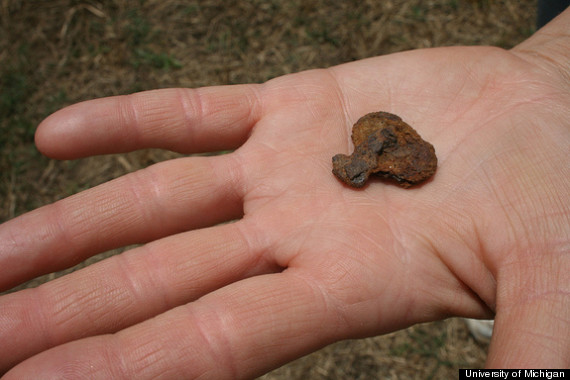 An iron clothing hook was among Spanish artifacts found at the site.

"For Native Americans, though, this was the beginning of a long-term and often tragic reshaping of their precolonial world," Moore added.

The crew also suspects the site will yield more discoveries.

"We also think we've identified a blockhouse or casa fuerte inside the fortifications, and this is where the soldiers would have stored their supplies — ammunition, tools, food, etc.," Beck wrote in an email. "In the field seasons to come, we'll focus on getting a much better understanding of this fort."

Editor's Note: This article has been updated with some of the fort dimensions.

1 / 8
Starlings
The starling is a small black bird, <a href="http://www.columbia.edu/itc/cerc/danoff-burg/invasion_bio/inv_spp_summ/Sturnus_vulgaris1.jpg" target="_hplink">easily recognizable by its purple and green iridescent plumage.</a> As if the tips of its feathers were dipped in cream, white flecks cover the bird's body, and its bill ranges from a dull brown in the winter months to a chipper yellow come summertime. While the starling may sound beautiful and majestic, it's probably one of the most detested little birds in North America, most often described as dirty, loud and downright invasive. Originally hailing from Great Britain, a quirky drug manufacturer named Eugene Schieffelin imported the bird to North America in 1860-61. He released over 100 starlings in New York City's Central Park with the romantic intentions of bringing to North America every bird ever mentioned by William Shakespeare. While his intentions may have been noble and romantic at the time, the starling is now a prime example of how disastrous it can be when humans meddles with nature. According to Columbia University, an <a href="http://www.columbia.edu/itc/cerc/danoff-burg/invasion_bio/inv_spp_summ/Sturnus_vulgaris.html" target="_hplink">estimated 200 million starlings</a> can be found in North America, their habitat ranging from the Atlantic to the Pacific. It roosts in hoards of up to a million, devouring massive amounts of seed, fruit, insects and even fungi when times are tough. The starling has proven to be quite the resilient bird -- it is what is known as a "habitat generalist," able to triumph in almost any climate. It is an aggressive bird, evicting native birds from their homes, competing (and most often winning) for food and space. A cavity nester, the starling competes with native species such as woodpeckers, Great Crested Flycatchers, Tree Swallows, Eastern Bluebirds and Purple Martins. Many attempts have been made eradicate the starling from the U.S., including installing speakers to broadcast starling distress calls, spraying them with detergents, using poison pellets, firing roman candles to destroy flocks, and even creating recipes for starling pies. It just goes to show how fast a Shakespearean dream can transform into a Hitchcockian nightmare. Flickr photo courtesy of <a href="http://www.flickr.com/photos/10565417@N03/6246539670/" target="_hplink">jidanchaomian.</a>
Flickr: Jidanchaomian