A celebrated pear tree in Danvers, Mass. still bears fruit at the ripe old age of 383, more or less -- and biologists find its remarkable longevity a bit baffling. 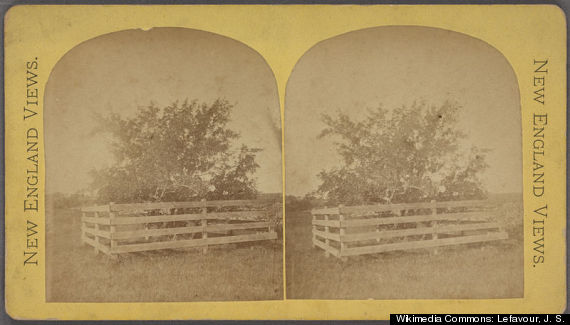 "It is in relatively open conditions," Dr. Primack told HuffPost Science. "It’s getting good light… The reason it's still bearing fruit is because people are pruning it, or it might be a naturally self-pruning tree."

What's more, the simple fact that the tree is so celebrated may be one factor in its longevity, Dr. Primack said. After all, a fence has been erected around it, and people continue to look after it after all these years.

"This pear has found a ‘niche’ in nature that has allowed it to live on and on, until the environment changes to create inhospitable conditions for survival," horticulturist Dr. Ron Smith from North Dakota State University told HuffPost Science in an email. "It apparently has not been subject to the normal ravages of Mother Nature to cause it to decline or become susceptible to lethal insect or disease attacks."

Until 2013, the oldest tree in the world was Methuselah, a 4,845-year-old Great Basin bristlecone pine in California's White Mountains, LiveScience reported. But then researchers found a nearby tree that dates back a whopping 5,062 years.

"Almost all the old trees are members of the Conifer family," Dr. Primack said. "They tend to be things like pine trees or gymnosperms, so they tend to be not really trees that are in this fruit-bearing family."

1 / 15
The President
In this 2009 photo released by Steve Sillett, The President, a Giant Sequoia Tree, is shown in Sequoia National Park, Calif. After 3,240 years the Giant Sequoia is still growing wider at a consistent rate, which may be what most surprised the scientists examining how they and coastal redwoods will be impacted by climate change and whether they have a role to play in combatting it. (AP Photo/Steve Sillett)
AP