WASHINGTON (AP)— Astronomers believe they've found the oldest thing they've ever seen in the universe: It's a galaxy far, far away from a time long, long ago.

Hidden in a Hubble Space Telescope photo released earlier this year is a small smudge of light that European astronomers now calculate is a galaxy from 13.1 billion years ago. That's a time when the universe was very young, just shy of 600 million years old. That would make it the earliest and most distant galaxy seen so far.

By now the galaxy is so ancient it probably doesn't exist in its earlier form and has already merged into bigger neighbors, said Matthew Lehnert of the Paris Observatory, lead author of the study published online Wednesday in the journal Nature. 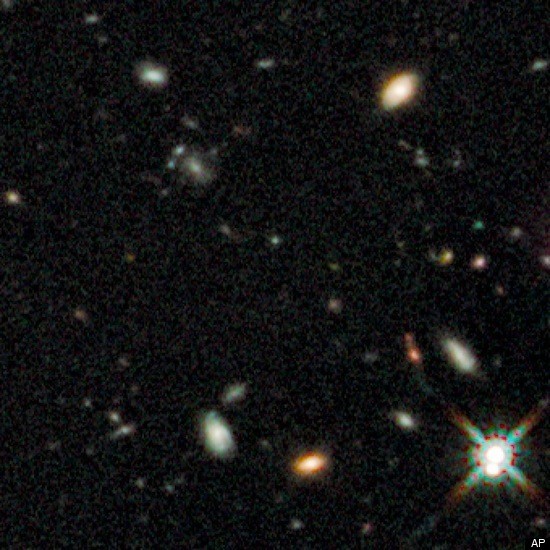 This undated handout image provided by NASA, taken by the Hubble Space Telescope, shows a small smudge, center, that astronomers believe is the oldest thing they have ever seen,light from a long time ago in a galaxy far, far away. (AP Photo/NASA)

"We're looking at the universe when it was a 20th of its current age," said California Institute of Technology astronomy professor Richard Ellis, who wasn't part of the discovery team. "In human terms, we're looking at a 4-year-old boy in the life span of an adult."

While Ellis finds the basis for the study "pretty good," there have been other claims about the age of distant space objects that have not held up to scrutiny. And some experts have questions about this one. But even the skeptics praised the study as important and interesting.

The European astronomers calculated the age after 16 hours of observations from a telescope in Chile that looked at light signatures of cooling hydrogen gas.

Earlier this year, astronomers had made a general estimate of 600 to 800 million years after the Big Bang for the most distant fuzzy points of light in the Hubble photograph, which was presented at an astronomy meeting back in January.

In the new study, researchers focused on a single galaxy in their analysis of hydrogen's light signature, further pinpointing the age. Garth Illingworth of the University of California, Santa Cruz, who was the scientist behind the Hubble image, said it provides confirmation for the age using a different method, something he called amazing "for such faint objects."

The new galaxy doesn't have a name - just a series of letters and numbers. So Lehnert said he and colleagues have called it "the high red-shift blob. "Because it takes so long for the light to travel such a vast time and distance, astronomers are seeing what the galaxy looked like 13.1 billion years ago at a time when it was quite young - maybe even as young as 100 million years old - Lehnert said. It has very little of the carbon or metal that we see in more mature stars and is full of young, blue massive stars, he said.

What's most interesting to astronomers is that this finding fits with theories about when the first stars and galaxies were born. This galaxy would have formed not too soon after them.

"We're looking almost to the edge, almost within 100 million years of seeing the very first objects," Ellis said. "One hundred million years to a human seems an awful long time, but in astronomical time periods, that's nothing compared to the life of the stars."