The oldest known globe to represent the New World has been discovered, researchers say.

Dated to the early 1500s, the globe was likely crafted in Florence, Italy, from the lower halves of two ostrich eggs. It is engraved with then-new and vague details about the Americas garnered from European explorers like Christopher Columbus and Amerigo Vespucci. It is also decorated with monsters, intertwining waves and even a shipwrecked sailor, according to the Washington Map Society, which published a study of the artifact in its journal The Portolan.

"When I heard of this globe, I was initially skeptical about its date, origin, geography and provenance, but I had to find out for myself," S. Missinne, an independent Belgian research scholar, said in a statement. "After all no one had known of it, and discoveries of this type are extremely rare. I was excited to look into it further, and the more I did so, and the more research that we did, the clearer it became that we had a major find." [See Photos of the Oldest Globes]

The anonymous owner of the globe, who bought it in 2012 at the London Map Fair, allowed Missinne to investigate the globe. The researcher used carbon dating, computer tomography testing, an ink assessment, as well as a geographical, cartographic, and historical analysis.

He determined that the grapefruit-sized globe was made around 1504 and was likely used to cast the famous copper Lenox globe housed at the New York Public Library, which, until now, had been thought to be the oldest globe to show the Americas, dated to 1510.

"This is a major discovery, and we are pleased to be the vehicle for its announcement," Tom Sander, editor of The Portolan, said in a statement. "We undertook a very extensive peer review process to vet the article, which itself was based on more than a year of scientific and documentary research." 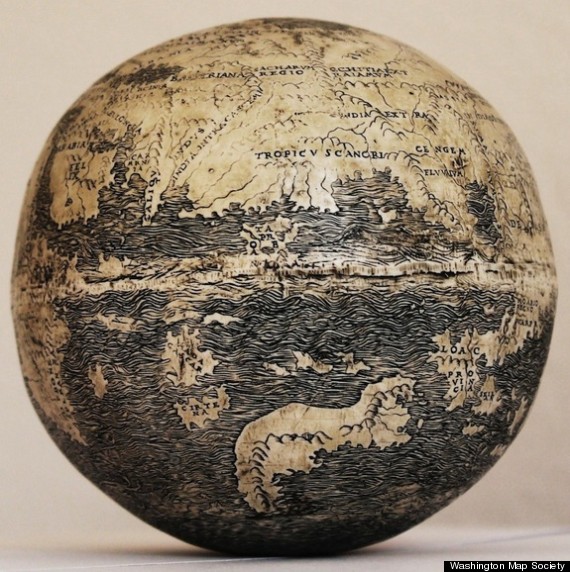 Asia on the ostrich egg globe, showing the large peninsula jutting southward at the right which is evidence of the influence of Henricus Martellus, a German cartographer who worked in Florence.

Of the 71 names on the ostrich egg globe, just seven lie in the Western Hemisphere. North America, which is represented as a group of scattered islands, is totally unlabeled and the globe includes one sentence: "HIC SVNT DRACONES," or "Here are the Dragons," according to the Washington Map Society.

Though the maker of the globe remains unknown, Missinne suspects the globe may be linked to the workshop of Leonardo da Vinci. The researcher noticed some similarities between a ship on the globe and the artwork of an artist well acquainted with Leonardo, according to the Washington Post.