Paleontologists are saying that a skull unearthed in Montana in 1997 represents a new species of dinosaur that lived about 104–109 million years years ago during the Early Cretaceous period. The skull suggests a bizarre crow-sized creature whose face sported sharply pointed cheeks and a prominent beak-like structure.

A paper describing the newly identified species, Aquilops americanus, was published online in the journal Plos One on December 10, 2014. 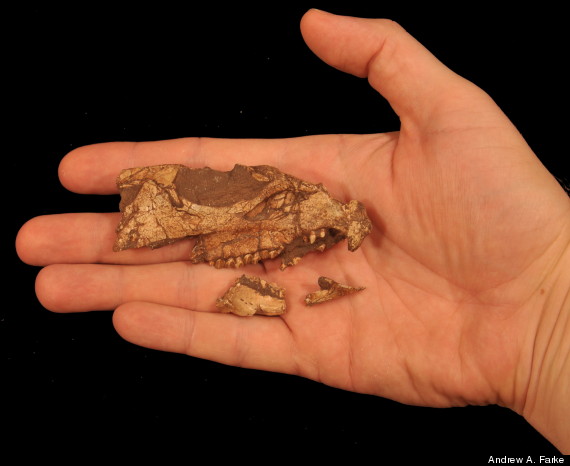 The fossilized skull of Aquilops americanus.

The researchers were surprised to note certain similarities between Aquilops and horned dinosaurs from Asia. The similarities suggest that the Aquilops's ancestors migrated from Asia to North America around 113 million years ago, Live Science reported.

"Aquilops lived nearly 20 million years before the next oldest horned dinosaur named from North America," Dr. Andrew Farke, a researcher at the Raymond M. Alf Museum of Paleontology in Claremont, Calif. and the paper's lead author, said in a written statement. "Even so, we were surprised that it was more closely related to Asian animals than those from North America."

The researchers said more fieldwork was needed to better understand precisely when and how the migration occurred.