The oldest-known representations of a pharaoh are carved on rocks near the Nile River in southern Egypt, researchers report.

The carvings were first observed and recorded in the 1890s, but only rediscovered in 2008. In them, a white-crowned figure travels in ceremonial processions and on sickle-shaped boats, perhaps representing an early tax-collecting tour of Egypt.

The scenes place the age of the carvings between 3200 B.C. and 3100 B.C., researchers report in the December issue of the journal Antiquity. During that time, Egypt was transitioning into the dynastic rule of the pharaohs.

"It's really the end of prehistory and the beginning of history," in Egypt, study researcher Maria Gatto told LiveScience. 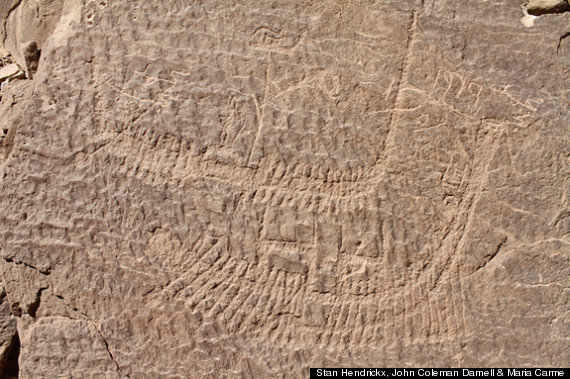 Look closely -- standing on the top of this boat is a crowned figure who may represent Narmer, the first pharaoh to rule unified Egypt. Oarsmen propel the boat along.

Scenes of a ruler

Gatto, a Yale University researcher, led the archaeologists who rediscovered the site in 2008. Archaeologist Archibald Sayce first sketched the carvings, found at the village Nag el-Hamdulab, in the 1890s, but the only record of Sayce's discovery was a partial illustration published in a book. [See Images of the Egypt Carvings]

The site was then forgotten until the 1960s, when Egyptian archaeologist Labib Habachi took photographs of the carvings, which he never published. It wasn't until one of these photos resurfaced in 2008 that Gatto and her team started searching for the site, which many people assumed had been destroyed in the interim.

Some of the carvings have indeed been vandalized since the 1960s, but Gatto and her team found the etched rocks in a natural amphitheater west of Nag el-Hamdulab. They then compared the carvings to Habachi's 1960s photographs.

There are seven carvings scattered throughout the area, and many are tableaus of boats flanked by prisoners. One of the most extensive carvings shows five boats, one of which houses the white-crowned pharaoh, his fan-bearer and two standard-bearers. Falcon and bull insignia on the pharaoh's boat symbolize royalty, further emphasized by the four men with ropes standing alongside that boat, likely towing it along the Nile.

A hieroglyph labels this scene a "nautical following," a likely reference to the following of Horus, Gatto said. In this periodic royal jaunt across Egypt, the pharaoh cemented power and collected taxes. Thus, not only do the carvings represent the oldest known vision of a pharaoh, they may also show the oldest Egyptian tax campaign.

Other carvings include a scene of people and dogs herding cattle and a cluster of animals, two of them apparently some mythical part-lion beasts. The other animals are familiar native African species, including two ostriches, an ibex and a bull. Another scene shows the brewing and drinking of beer, perhaps a reference to a festival.

The style of the carvings and hieroglyphics place the creation of the images around 3200 B.C. to 3100 B.C., Gatto said. This would have been the reign of Narmer, the first pharaoh to unify Upper and Lower Egypt.

Based on the symbols of power and control in the carvings, Gatto and her colleagues believe the artwork came from the first part of Narmer's reign, before he unified both parts of Egypt.

"It seems that for Narmer it was important first to settle the situation in the South, to control the South, and then apparently move to the North, and at that time he unified Egypt and we have the first dynasty," Gatto said.

The next step for researchers, Gatto said, is to protect the site. That presents a challenge, not only because of the carvings' outdoor location, but also because of recent political upheaval in Egypt.