Scientists have long known that pockets of ancient water exist deep beneath Earth’s surface. But first-of-its-kind new research that shows where the water is located--and just how old it really is--has raised some eyebrows.

"A global picture of just how extensive these deep waters could be has not been done before," Dr. Barbara Sherwood Lollar, a professor of earth sciences at the University of Toronto in Canada and the lead author of a paper describing the research, told The Huffington Post in an email. "The paper provides a scientific treasure map of places to go to further investigate the ancient waters and possible subsurface biomes."

The researchers collected data on ancient subterranean water from 19 mining sites around the world, and mapped out the locations of where these waters flow out of rocks, deep within Earth's crust below Canada, South Africa, and Scandinavia.

"The waters we sampled range from 1 kilometer below surface to greater than 3 kilometers," Sherwood Lollar said in the email. "The combination of so deep and so old is what is unexpected."

After all, some of the ancient waters are the oldest yet found, dating back to more than one billion years, she said. 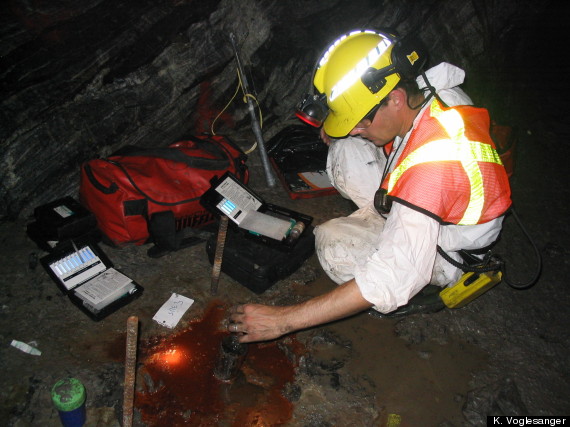 How could it be that the underground water is significantly older than water on Earth's surface? As Sherwood Lollar explained in the email:

"Water is always a mixture of drops that entered a lake or stream or ocean at different times and circulates at different time scales. For groundwater it is the same, water enters the subsurface on different timescales, and remnants of water that was present when the rocks were formed can remain. To date, while scientists knew that tiny blebs of water could be trapped in microscopic compartments of minerals called 'fluid inclusions,' and such inclusions could even record the fluids from the Earth’s early time periods more than billions of years ago, we did not know before this that such ancient fluids could be retained in waters that are literally bubbling up out of fractures in the rock and flowing."

And for Dr. Chris Ballentine, University of Oxford's chair of geochemistry who was also involved in this research, the age of the ancient water was pretty astounding.

"For it to be preserved and kept there for so long is a surprise," he told BBC News. "So when you think about what's down beneath your feet, it's more exciting than just some rock."

The paper was published online in the journal Nature on December 17, 2014.

What else is lurking beneath our feet? Check out the "Talk Nerdy To Me" video below to learn more about Earth's interior.