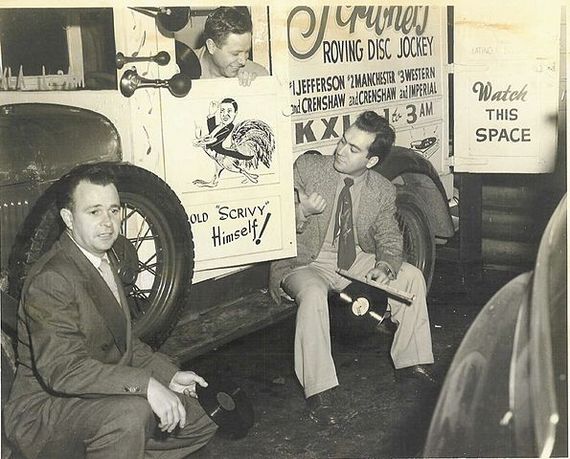 February 12th, 2015 is going to be remembered as a tragic day for the megalopolis of Los Angeles and will be felt throughout the Southwest. Yesterday I was toggling back and forth on my radio dial between KPFK, NPR, KCRW, KUSC, and KXLU, when I paused on the latter to listen to Ralphi Pagan's, Make It With You, an oldie from back in the day, 1971. It was odd to hear it on this station, considering they normally play fierce independent rock and roll around this time, and as I made it to my destination, another oldie came on. Vexed by this programming, I waited for the disc jockey to comment, which she then maintained she was paying homage to Art Laboe who was shut down to make room for a mainstream Hip Hop and R&B program. Thus, she was taking oldies requests to commemorate his legacy. Back in 1949 in Los Angeles, Art Laboe, radio engineer and personality, disc jockey, and music producer, set up a radio program in a popular drive-in hangout, where teenagers would give on-air dedications to their sweethearts. Shortly thereafter, he began to compile the most frequented requests and had an idea to put together a greatest hits album of various artists. In U.S. music history, this had never been done, but soon he would take the region by storm with his collection of soul ballads recorded by mostly Black Americans, Italian Americans, and some White and Latino Americans. It started with doo-wop followed by soul, and remained as such to maintain loyalty to the genres. Since then, oldies but goodies collections, a term he coined, have become some of our most prized possessions.

Over the decades, his radio programming and collections have struck a chord with the people of Los Angeles. The music became associated with the automobile culture, drive-in theater-going, dance halls, cruising, love-making, film, and the laidback lifestyle of Southern California.

Simultaneously, it connected with street gangs and counterculture, and images of gang members behind bars listening to fine tunes waiting for the day to reconnect with their original darlings, or gang members driving vintage autos, come to mind. The music helped transcend language and cultural barriers, considering Armenian American Art Laboe was connecting the Mexican American and White communities, with Black American soul music, and inspired them to contribute some of their own hits. Modern Los Angeles culture has always been an experimental laboratory to originate new ideas, to find new ways of looking at the ecology of our environment. And as such, when Los Angeles has been criticized for its lack of cultural contributions because of Hollywood's shallow celebrity iconography, we can always stand tall and proud at what we've always been--fusion. Our eclectic mix of people and culture has produced as much for world culture as Paris or Tokyo.

Back in the late 1980s, the gang members who congregated in front of my house would drive up in their low-riders and leave their cars parked with oldies blaring in the background. They would stand around loitering, drinking booze, laughing and joking, engaged in conviviality. Often they wrote on our walls in block letter typography and tagged the neighborhood followed by roll calls in extraordinary hand styles. The lifestyle and music appeared romantic, and shortly thereafter my sister joined a street gang and began collecting oldies music. She had tapes by groups like The Moments, Blue Magic, Mary Wells, and many others, and she would hit up the neighborhood and her boyfriend's in the cover sleeve with beautiful blocks and handwriting. Everyone has their personal narrative of how they became involved wit this genre of music, but once you've discovered its tenacity, it becomes part of your lifestyle. In the Mexican American community, we even tattoo song dedications around our chest like a permanent chain, a serious commitment to the genre. And now, Art Laboe, at 89 years old, has been asked to step down to make room for an overly-stimulated pop music genre that is often associated with the dumbing down of society. In the fast-paced digital age, we are often left with difficult decision-making in regards to leisure, but those of us who remember a life without the internet can always disconnect in ways we remember how... by listening to our oldies for hours without interruptions. Thanks Art Laboe, and the City of Los Angeles for acknowledging his worth, and for declaring Art Laboe day on July 17, 1981.

This one goes out to David Robles in Calipatria State Prison, Not on the Outside, by The Moments
Photo Credit: Art Laboe, 1950's