It's a "good news" day! A perfect sunny spring day to flip through the newspaper while sitting at the windowsill and enjoying the gentle breezes that will lead us to summer. 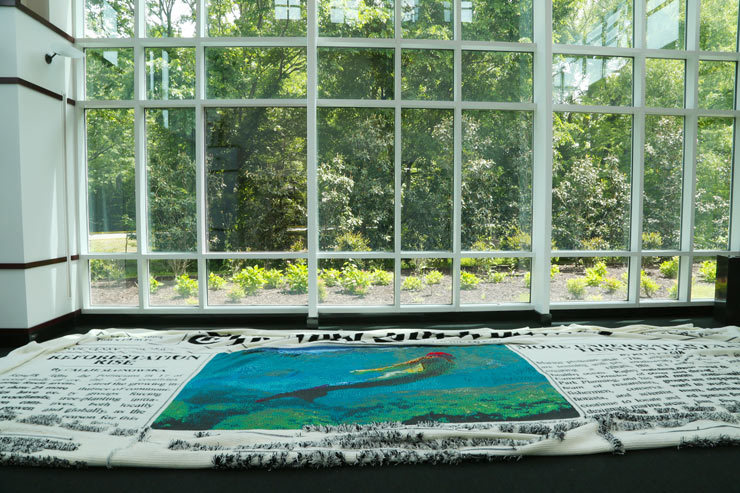 It's good news especially for street/crochet/fine artist Olek at the Virginia Museum of Contemporary Art and her brand new recreation of a shockingly large crocheted front page of The New York Times that she draped on an exterior facade of the museum last week.

"Can you imagine a day that only had good news? I dream that someday there will be at least one day a year with only good news to share," she told us during an interview, and as idealistic as that sounds, you can imagine the effect of that on readers when you experience the scale of this work. In effect, Olek is speaking to the power of the media to shape our perception of the world as much as she is dreaming that there would be enough good news to fill it. Perhaps there is already, she posits, but we're not focusing on it. 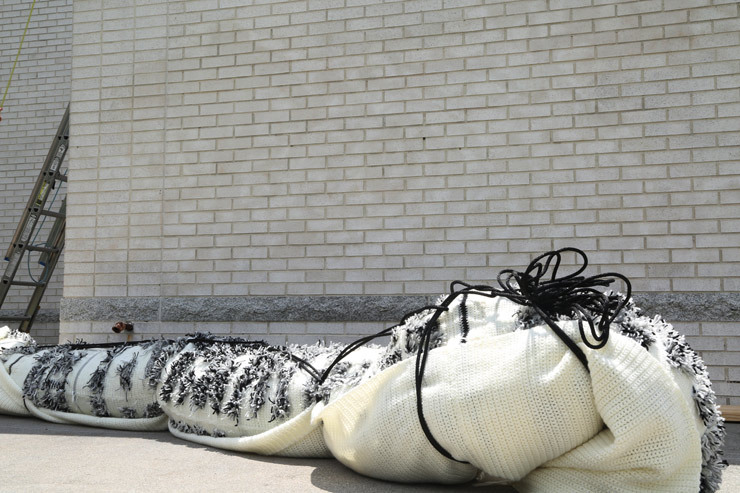 With a lead story about the rise in "underwater parks" and headlines trumpeting a steep rise in vegetarianism and a global ban on plastic bags, you would be hard-pressed to imagine an above-the-fold selection like this to be featured in the Times ever -- especially only four years from now, as indicated by the 2020 date in the masthead. For a variety of reasons, this amount of this sort of news wouldn't be "fit to print", as the times likes to refer to its content.

But Olek says that she is dreaming and she was inspired by the "Turn the Page" theme of this show, which encouraged her to look forward as she created this crocheted piece in Poland and New York of 576,000 loops. The exhibition just opened over the weekend celebrates the 10th Anniversary of the San Francisco based Hi-Fructose, a glossy quarterly art magazine that has set a high-quality standard for Low Brow and its various cousins that are bending conceptions and challenging categories of pop, surrealism, hyper-reality and fantasy. 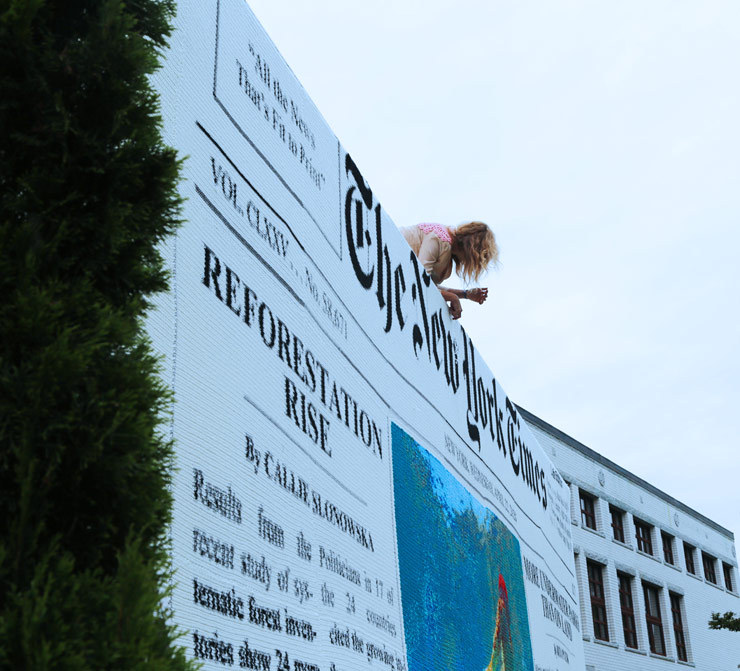 At the opening Saturday, the visitors were treated to a wide variety of contemporary artworks that satisfied and challenged with unusual imagery which plays as much on the last fifty years of pop culture as it does with modern perceptions of traditional art-making.

Running through the end of the year before traveling to the Akron Art Museum in Ohio and the Sacramento Art Museum, the show features 51 artists that span a number of the newer genres of surrealism, dark pop, design and influences from street culture of course with names that have grown appreciably in the last decade including Camille Rose, James Jean, Tara McPherson, Shepard Fairey, Kehinde Wiley and Mark Riley, whose surreal fantasy works here have somehow irked the irony-challenged protectors of goodness some folk in the community. 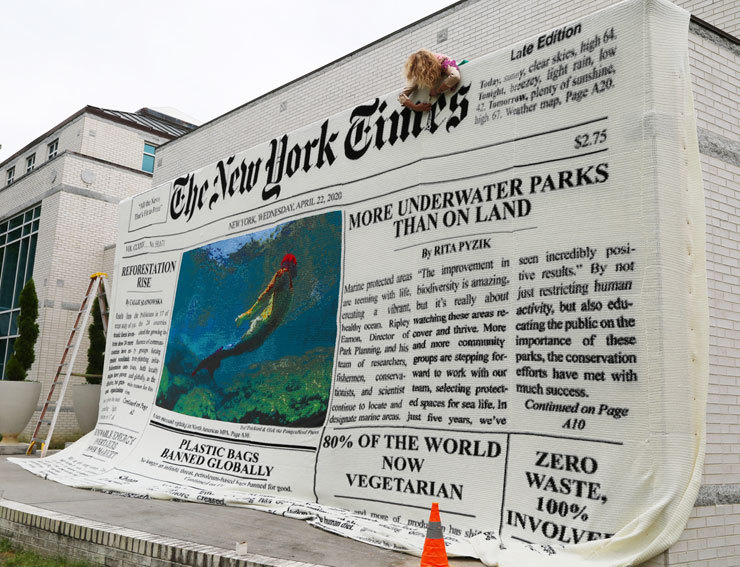 Hopefully they won't be outraged by Olek's new tapestry inspired work which implies that humans are somehow responsible for global warming and pollution, instead of islands of plastic consumer packaging growing organically in our oceans because God wants it that way. In fact, Olek is suggesting that each of us holds a responsibility to sway the headlines with our own actions.

We spoke with Olek about the philosophy behind this new work and how it arrived here for "Turn the Page."

BSA: How did you decide to create a work like this featuring what you call only good news?

Olek: Every paper, TV and radio station will publish only positive news. Negativity creates negativity so I hope positivity will create positivity. I travel a lot and I always stop by the bookstore in the airport and take a look at the front pages of different magazines and newspapers. And there are always all bad news... once I even saw a front page with headlines conjecturing about which celebrities were going to die next. How horrible is that?

So, yes, I dream about good news. 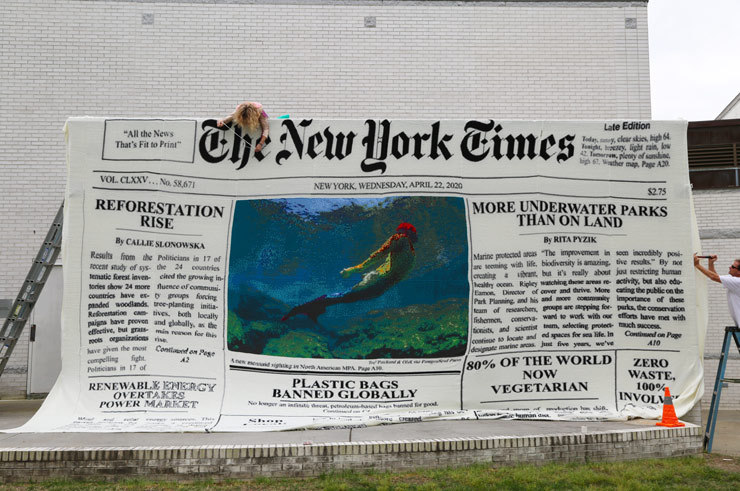 This grand desire served as inspiration for this piece. When I came to Virginia Beach over two years ago I searched different locations for my public projects. I felt strongly that my public piece should be about the environment since Virginia Beach is so connected to the ocean. Later, I came up with the idea to create a wall for the museum as well and wanted to connect the pieces together.

I would like this work to inspire change. All the messages that I crocheted could be actually real. We can start simply with using own bags instead of plastic bags that should be banned globally. We blame big corporations but we should really blame ourselves. Everything starts and ends with a customer.

Sometimes some choices might not be the most convenient but most of us have that choice. Start with replacing the bottled water - especially the one that travels across the globe to your fridge -- with your own water bottle that you can refill - especially when you live in a place where you can drink tap water. 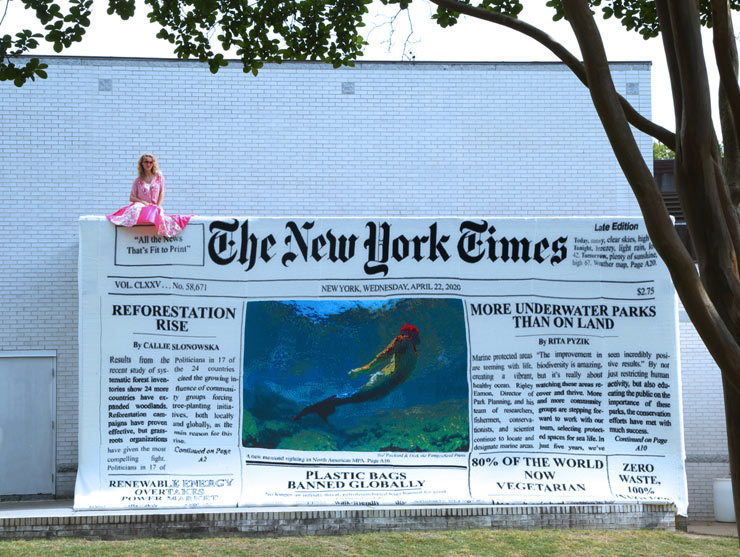 The style is a departure from most work you've done in the past - recreating a fictional newspaper seems like it could be a rather repetitive experience.

Crochet is always a repetitive experience. That is why I am trying to challenge myself. I actually did some crocheted portraits a while ago and this piece is the same technique. You might have seen it in the installation I created in collaboration with Michelle Dodson (video link). It requires me for sure to have a total focus and patience.

I started crocheting phone "text" into some of my studio works in 2006 and my very first pieces in 2003 were installed in the forest in upstate New York. I think there is continuity with my previous work but my technique is better now, although I still have plenty to learn and that is what keeps me so in love with crochet.

The process for creating this piece was really long. Every time I go back to Poland and you see me on social media posting images of trees, flowers and sunsets it simply means I am working on something new and do not want to share it yet. 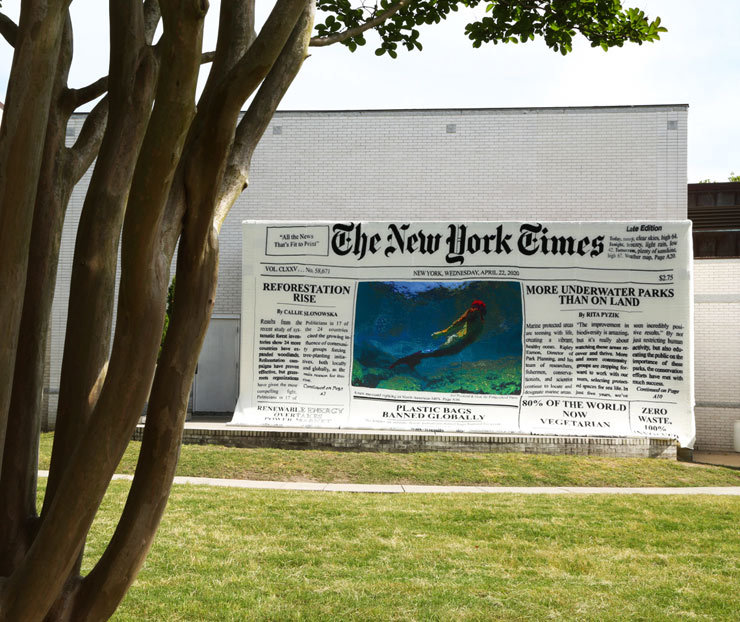 I have a place in a forest by a river where no one could ever find me. In that house my grandmother was born, my mother was born and I took my first steps. In the same house I've learned how to sew and crochet. It inspires me the most and gives me the most energy.

I remember when I went there in May 2005, the first time I returned after immigrating to New York in 2000, and I exploded with ideas. I crocheted trees around the house, a car, a footbridge... this was long before anyone could think about it. Years later I crocheted a whole stable there that only my grandmother and my parents have seen in person.

I grew up in a city but spent a lot of time in the countryside. This is probably why nature is so close to my heart. And I am devastated as I see our mother nature dying in front of us.

For my recent birthday I spent the day with my family and I celebrated it by hugging 38 trees. This ephemeral performance was shown publicly only on Snapchat and I think the only person who saw it was Faith 47 because I did not know that my account was set to "private".

What were some of the challenges making this?

Time! As usual the final and best idea arrives when the deadline approaches. As you know, my work is very time consuming and this piece especially was challenging.

I worked on it with my New York assistant Whitney Spivey and my Polish crochet master Ewa Szylewska. Whitney was working with me on graphics and making sure that the design was good for crocheting.

But before we even started the design process, I asked different people about possible headlines. And to be honest it was more difficult than you might think.

Who helped me? I'll give you a clue. Who would you guess is hidden behind the name Callie Slonowska? What about the date of the paper? There is much more info here than you might think.

A work like this has the potential to spark conversation about topical matters you feel strongly about. Did you have an opportunity to discuss any of them with viewers while you were installing or during the opening?

I am interested to know how this will inspire and motivate people on many levels. The most common reaction I've heard was: "WOW". People were admiring both the detailed work and my dedication to it as well as the positive message. Someone suggested that I might have started crocheted photorealism. I hope to start some positive movement. Or maybe someone will publish a new paper with me that would focus on good news only.

Hi Fructose has really been on the forefront of an aesthetic that still hasn't gone mainstream in many ways. How did you feel walking around and seeing the work of these artists at Virginia MOCA?

I think the show is really good. It is a great selection of artists and the curators chose amazing pieces to represent each artist. The magazine is really great and they are doing an amazing job to keep it up-to-date.

If you are in the area, please go hear Olek in person June 9th at the museum. Our sincere congratulations to founders Annie Owens and Daniel "Attaboy" Seifert of Hi-Fructose for an astonishingly beautiful 10 years of Hi-Fructose.