How do we know that yarn-bombing artist Olek has arrived in Washington, D.C. for her exhibit at the Smithsonian Museum? Because a 12-foot statue of Albert Einstein has been dressed in one of her signature crocheted creations. Sitting on the grounds of the National Academy of Sciences, Mr. Einstein received a camouflage make-over from the Polish-born, New York-based artist, who sewed the statue's suit on-site. 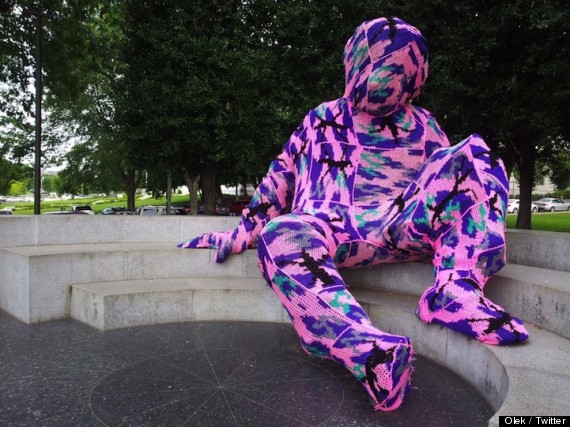 Olek is in DC for the "40 Under 40: Craft Futures" exhibit at the Smithsonian American Art Museum. But true to her crocheted-graffiti roots, she ventured outside of the museum to give Washington a taste of her talents. That is, if you were quick enough to catch it before the yarn was removed from the Einstein statue a few hours after.

Thankfully, the American Art Museum and Olek herself posted some photographs of the yarn-bombing on their respective flickr and twitter accounts (first featured on My Modern Metropolis).

Check out images of Olek's crafty ode to Albert Einstein in the slideshow below and let us know what you think in the comments section: