The mere thought of losing a child is crippling to any parent, which may be why so many movies have explored the pains of families torn apart by the death of their offspring. Olivia Wilde and Luke Wilson are the latest actors to channel such tragedy. Their new film, "Meadowland," premiered at the ongoing Tribeca Film Festival, receiving theatrical distribution before the New York festival even began. Its meditative quality aligns the project more closely with "Ordinary People" and "Rabbit Hole" than it does "Don't Look Now" and "A Cry in the Dark" -- and that is not without purpose.

Reed Morano makes her directorial debut after notching cinematographer credits on "Frozen River," "The Skeleton Twins" and the first season of HBO's "Looking." Morano massaged first-time writer Chris Rossi's script, which initially highlighted the investigation into the disappearance of the central couple's child, who vanishes from a gas station where they make a pit stop while traveling. Instead, Morano wanted the movie to zero in on the grieving process, so "Meadowland" traces schoolteacher Sarah (Wilde) and police officer Phil (Wilson) a year after their loss. Still struggling to enjoy themselves in the company of friends, the couple slip away from each other as both -- particularly Sarah, who wanders aimlessly through Times Square and cannot focus at work -- are unable to find peace within themselves. With Morano's perspective, the story became much quieter, but it was also fleshed out to include, among others, Phil's troubled brother (Giovanni Ribisi) and a neglected special needs child (Ty Simpkins) who becomes a target for Sarah's motherly instincts.

Morano told The Huffington Post that she set out to cast a mother in the role, but when she and Wilde first met, the actress was not yet pregnant with her and Jason Sudeikis' first child, who was born in April 2014. Wilde convinced Morano she could carry the weight of the role, looking to the many performers who have stepped into unfamiliar worlds. (She cites Cate Blanchett's Oscar-nominated turn as Bob Dylan in "I'm Not There" as an example.) But when Wilde became pregnant herself, the film took on new personal meaning for both women.

It took that and having Sudeikis by her side to make "Meadowland" the introspective drama that it is. Wilde said her fiancé acted as a "support system" as she prepared to tap into such gloomy headspace. Now they can take in Tribeca together, where Sudeikis' "Tumbledown" and "Sleeping with Other People" -- both romantic comedies -- are also screening. It almost feels like a reward for Wilde after living with the depths of grief depicted in "Meadowland." And the same goes for Morano, whose husband, Matt Walker, is a gaffer.

"There is that awesome level of understanding of the process that we’re going through," Wilde said of their experiences. "And I think that helped us both make this film because it really helps to have someone cheering you on." 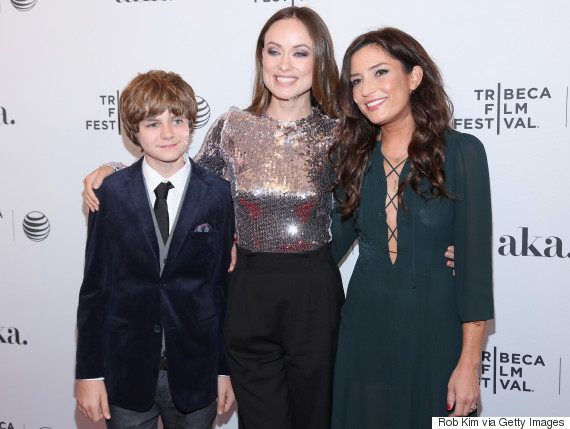