ROME — He was pilloried by the Vatican for creating a sculpture of Pope John Paul II that some mockingly say looks more like Fascist dictator Benito Mussolini than the beloved late pontiff. Now artist Oliviero Rainaldi has a chance at redemption.

The sculptor recently agreed to carry out changes decided upon by a committee of art experts, culture officials and scholars.

In an interview with The Associated Press, Rainaldi accepted the bad press and said it was all part of the work of being an artist.

"Even Michelangelo was criticized" for his work in the Sistine Chapel, the sculptor told The Associated Press in an interview in his studio in a converted pasta factory in Rome.

The unveiling last spring of the nearly 5-meter (16-foot) tall bronze outside the city's main train station bewildered the public and triggered salvos of sarcasm from the Vatican's art reviewer – prompting Mayor Gianni Alemanno to appoint the committee.

The panel "suggested that a chance be given to the artist ... to make it, as much as possible, similar to the original agreement," Francesco Buranelli, a committee member and a top Vatican arts official told AP Television News in an interview.

Writing in L'Osservatore Romano, the Holy See's usually restrained chronicle, critic Sandro Barbagallo lamented after the statue's unveiling that it looked like a "bomb" had landed and likened the cloak the pope is depicted as holding open to a "sentry box."

That few could recognize it as honoring John Paul was a "sin," Barbagallo declared.

Asked what he tried to express in the work, Rainaldi told the AP the wide-open cloak was "a symbol of opening, of knocking down walls."

John Paul "donated himself, emptied himself" in the name of dialogue, Rainaldi said in explaining the gaping space that the Vatican critic lambasted as "a gash."

But the minimalist treatment of the statue's roundish, bald head leads many passers-by to shake their heads as they wonder whom it depicts.

"Mussolini?" ventured Pavel Michenko, from Moldova, who stopped to scrutinize the sculpture as commuters rushed to catch trains, taxis whizzed by and buses belched fumes into the early autumn air.

Despite agreeing to changes, Rainaldi said the "makeover" on the 4-ton sculpture will be modest, saying a drastic rework is something he "couldn't contemplate."

The bronze's "patina," or sheen, which now ranges from a sickly green to a brownish area on the cloak that looks as if a cappuccino was spilled on it, will be redone, leaving the work with a uniform, dark "cold green" hue, the 55-year-old artist said.

While the city's announcement says the head will be "redone," Rainaldi insists he'll only do "technical touchups."

A pedestal will be created for the sculpture, which sits on a small island of lawn, surrounded by modest rose bushes, with wilting blossoms in the yellow and white hues of the Vatican.

The Vatican's acid pen was even more startling given Rainaldi's impeccable credentials. Committee member Buranelli, a former director of the Vatican Museums, hailed a mystical vein in Rainaldi's work in a commentary about his art in a coffee-table book.

Rainaldi was tapped by John Paul to become a member of a five-century-old prestigious pontifical academy of architects, musicians and artists.

In his studio is a photograph of a smiling Pope Benedict XVI, his eyes twinkling with curiosity, with Rainaldi beaming in the background, as the pontiff studies an oil painting of a gauzy, ghostlike figure representing saintliness. The artist's work was included in a show at the Vatican this summer celebrating Benedict's 60 years in the priesthood.

Rainaldi downplayed any hard feelings over the harsh criticism, although he did reveal that in the first days of the flap, he had holed up in his studio, only to slip out one night to stand in the station square and ask passers-by what they thought without identifying himself as the sculptor.

"The idea was to do a homage to the pope," Rainaldi said, adding he could have done a literal image, like "the hundreds of those you see in souvenir shops."

Instead, he said: "I did a sculpture." 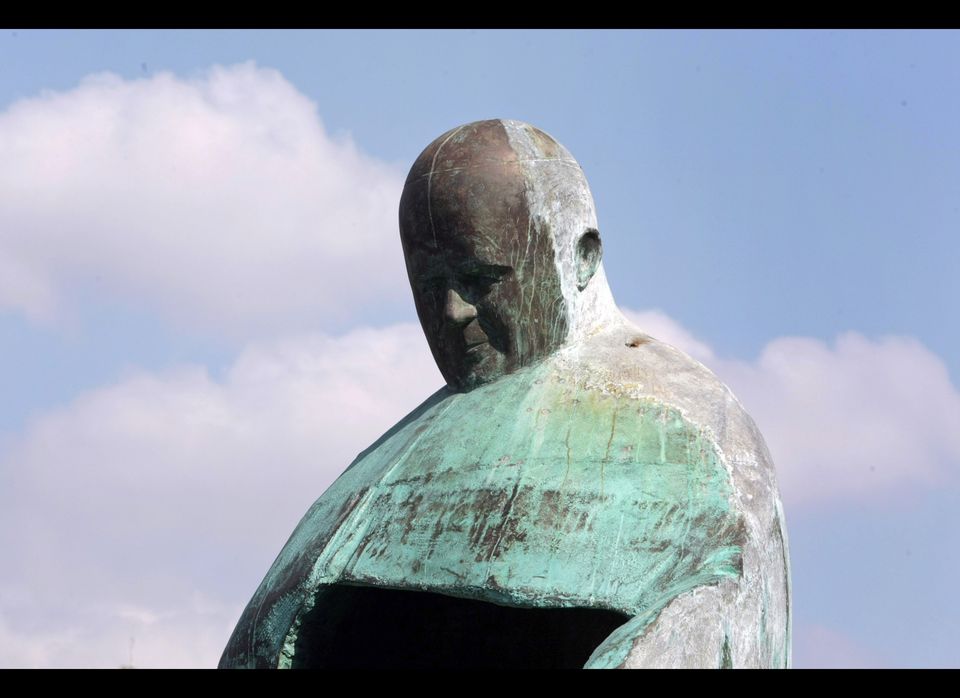 1 / 5
Vatican Pope Art
In this photo taken on Sept. 23, 2011 bronze sculpture of late Pope John Paul II stands outside Rome's main train station. Pilloried by the Vatican for creating a sculpture some mockingly said more resembled Benito Mussolini than beloved John Paul II, a Rome artist has been given a chance at redemption. Sculptor Oliviero Rainaldi said he will soon tackle changes decided upon earlier this month by a committee of Vatican art experts, Rome culture officials and scholars. In an interview with The Associated Press, Rainaldi accepted the bad press and said it was all part of the work of being an artist. "Even Michelangelo was criticized" for his work in the Sistine Chapel, the sculptor said. (AP Photo/Gregorio Borgia)
AP