It appears Google is not a fan of Russia's anti-gay law.

The Google homepage featured a Doodle on Thursday of seven athletes across a rainbow banner, with the following quote from the Olympic Charter: "The practice of sport is a human right. Every individual must have the possibility of practicing sport, without discrimination of any kind and in the Olympic spirit, which requires mutual understanding with a spirit of friendship, solidarity and fair play." 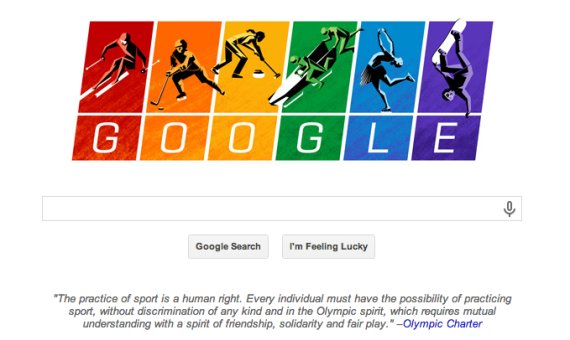 The Doodle was visible across international sites, including Russia's, as the Olympic games began in Sochi.

Russia's ban on gay "propaganda" to minors has sparked international outrage as gay activists have been fined across the country since the law's implementation last year, according to the Associated Press.

Russian President Vladimir Putin's suggestion that gays were welcome in Sochi if they "leave the kids alone," offered little reassurance.

Recent protests around the world targeted Olympic sponsors, and AT&T was the first sponsor of the U.S. Olympic Committee to speak out, stating, "Russia's law is harmful to LGBT individuals and families, and it's harmful to a diverse society."

The Human Rights Campaign offered their support for Google's logo, with organization president Chad Griffin declaring in a press statement, "Alongside Olympic sponsors like AT&T, Google has made a clear and unequivocal statement that Russia’s anti-LGBT discrimination is indefensible. Now it’s time for each and every remaining Olympic sponsor to follow their lead. The clock is ticking, and the world is watching."

Google declined to provide a comment on the logo to HuffPost.

This would not be the first time Google has come out in support of gay rights. In 2012, Google launched "Legalize Love," an initiative supporting LGBT rights around the world.

This story has been updated with responses from Google and the Human Rights Campaign.

CORRECTION: An earlier version of this story stated there were six athletes in the Doodle. There are seven.