It is a truth universally acknowledged a single molecule in possession of an interesting structure must be in want of an image.

Last year, Graham Richards (University of Oxford) and Tony Williams (Royal Society of Chemistry) were talking about one particular small molecule made up of five interconnected rings of carbon atoms. It looked incredibly like an iconic sporting logo that's pretty hard to avoid in the U.K. this summer. The molecule's proper chemical name is benzo[cd]pyrene but in this story it goes by a different name -- olympicene.

One of my colleagues, Peter Scott, had heard about this conversation and he asked me a couple of questions. Could it be made? And what would it really look like? We set about trying to find out. Anish Mistry in my research team was eager to try to make some olympicene in the lab. The best recipe for the molecule dated from the 1960s and the authors did not know exactly what they had made. We modernised their method and designed an improved series of chemical reactions to build the molecule. We found that olympicene is relatively easy to make, but it is quite sensitive to light and air. We analysed the molecule by standard laboratory methods but what we really wanted was a picture.

Giovanni Costantini, another Warwick colleague, agreed that he would try to "take a picture" of it using a cutting-edge imaging method. Once Anish had made the molecule, he passed it to Ben Morton in Giovanni's team and we got some initial images. This process isn't as easy as it sounds because a single olympicene molecule is small. I am not just talking "we need a big magnifying glass" small, either: olympicene is one hundred thousand times smaller than the diameter of a human hair. These numbers can sometimes be difficult to grasp, so let's put it another way. Imagine that a molecule of olympicene were magnified to the size of an orange. If that same orange were magnified by an equivalent factor, it would be the size of the Earth! To image the molecule, Giovanni and Ben used an instrument called a scanning tunnelling microscope. The machine doesn't look much like a traditional microscope -- it looks more like a one-man submarine with lots of portholes, in fact -- but it did let us see individual olympicene molecules for the first time.

We were extremely fortunate to see the size and shape of anything so small but -- and this is where is gets even more incredible -- at IBM in Zurich, Switzerland, they have a machine that can not only image individual molecules, it can distinguish between individual atoms. This machine is called an atomic force microscope and it "feels" its way along molecules using a detector that is only a single atom thick. Using this microscope, it is possible to "see" different types of atoms in a molecule and the individual chemical bonds between them. We sent some olympicene to IBM and using this cutting-edge technology, Leo Gross and colleagues took an amazing high-resolution picture of a single molecule. We can clearly see the expected five rings in the molecule, each one made of six carbon atoms. It looks a bit like a tiny piece of honeycomb or an iconic sporting flag -- but an extremely small one! 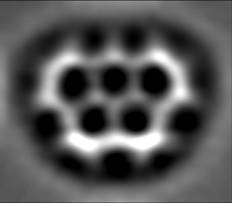 So how small is small? It would not be possible to have too many fewer atoms in the molecule and it still be the same shape. And given that individual atoms are as small as we can go when making stable substances, this molecule may be the smallest arrangement of these five rings that will ever be made.

Dr. David Fox is an Associate Professor in the Department of Chemistry at the University of Warwick, U.K. His research involves analysing how chemical reactions happen and making new molecules such as clinical drug candidates.