"We're getting no cooperation with the weather," shrugs Mike Teti, the non-nonsense coach of the U.S. National men's eight boat. There's an icy wind at the normally placid Briones reservoir nestled in the tawny hills behind the University of California at Berkeley. Teti shoves off in the launch in search of calmer water on the far end of the sprawling reservoir, his racing shell already swallowed up in the thick mist that blankets the black churning water.

At the eastern corner of the reservoir, near the reed-lined shore, the rowers wait. The fiercely muscled David Banks is up in bow, which might seem an odd place for such a powerful rower. But Teti says Banks "rows really well there," adding that he's learned through the years that "sometimes things that don't make sense actually work" when it comes to squeezing more speed out of a boat. Like, for instance, Teti's seemingly radical decision to put his tallest rower, the 6'9" Brett Newlin, in stroke (at the boat's back-end). Newlin does have elite experience -- he stroked a four at the Beijing Olympics -- and Teti says he sets a good rhythm, and notes that sometimes with an especially tall rower "it's easier to row your own rhythm than to follow."

That sensibility describes the rugged Teti, who with an Olympic gold and bronze to his credit as coach (and a world championship as a rower) exudes creativity and confidence. "This is the deal," he announces bluntly, explaining to the men the pacing for the opening 500-meter segments of the first of several 1,500-meter pieces. 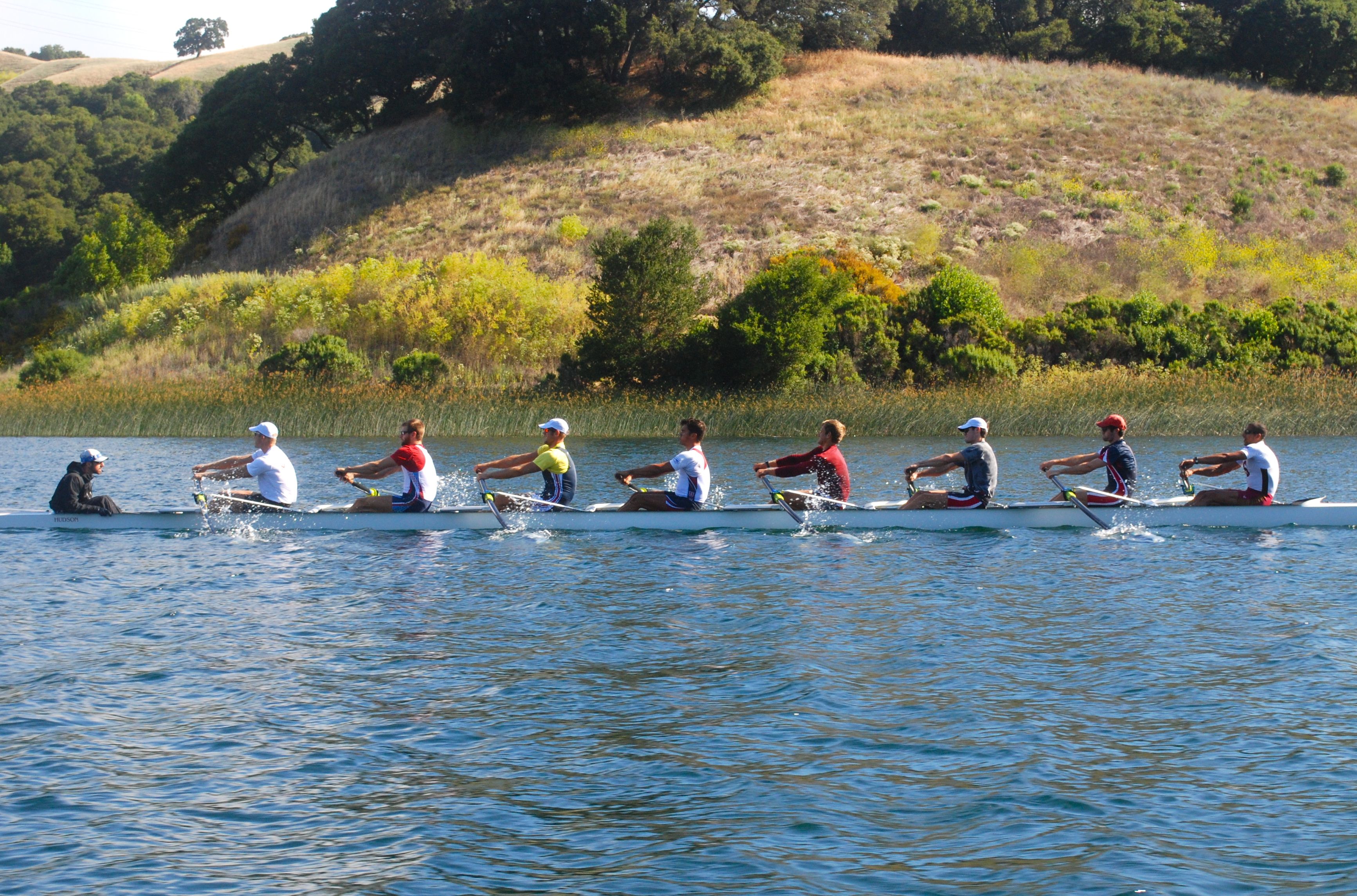 "Keep the blade work tight," he hollers through the bullhorn. "I'd like to have an answer on these new blades. Let me know if they feel different."

Eight oars dig in and the boat heaves to a start and is soon gliding along the shore, eight men compressing and expanding like synchronized pistons in a sports car. They're cruising easily at just 18 strokes a minute, then shift to 20 a minute, and finally to 22. The launch pulls so close you can hear the men breathe and feel the surge of each stroke.

As the men pass the makeshift 1500-meter finish mark and stop rowing, a small aluminum skiff rumbles toward the drifting racing shell and then eases up, two physiologists onboard, the renowned Dr Fritz Hagerman, who has worked with U.S. National rowing teams since 1972, and his prodigy, Dr. Jason White. The day before they submitted the rowers to a battery of tests on rowing machines.

"We're going to come and get lactate from you," announces Dr. White, who stands uneasily and leans toward the racing shell. It's tricky work on the rough water, with the physiologist balancing on the skiff, and the rowers hunched over pricking their fingers for blood.

They repeat this extraordinary routine multiple times -- each 1,500-meter piece progressively faster, the stroke rates increasing to generate blood samples with higher lactate readings. The wind is harsh, but during the fourth 1,500-meter piece, the clouds scatter and they are suddenly rowing fast under a glorious blue sky.

The sleek boat glides by the finish. Teti likes the time on his stopwatch, and writes the number on the back of an envelope.

The men await the sixth and final 1,500-meter piece, with arms out and oars ready to pull. Dr. Hagerman's voice carries through the wind. "If you guys don't do well in London," the gray-haired physiologist yells from the skiff. "I'm going to come over there and beat your ass up!"

Teti grins at that good-natured encouragement from the senior physiologist, and pauses before raising his bullhorn: "Alright, focus guys."

This last piece is even faster, and after the first 200 meters of a surging start, Teti calls out: "OK 1,250 to go in the Olympic final!"

The men's shoulders give a final push at the end of the stroke, driving the oars free.

"You're one seat down Brett!" Teti yells to his stroke, Brett Newlin. "One seat down...you're even!"

The boat slides past and there's no mistaking the finish. The men let loose with screams, grunts and low groans, slumping to the side like the wounded. 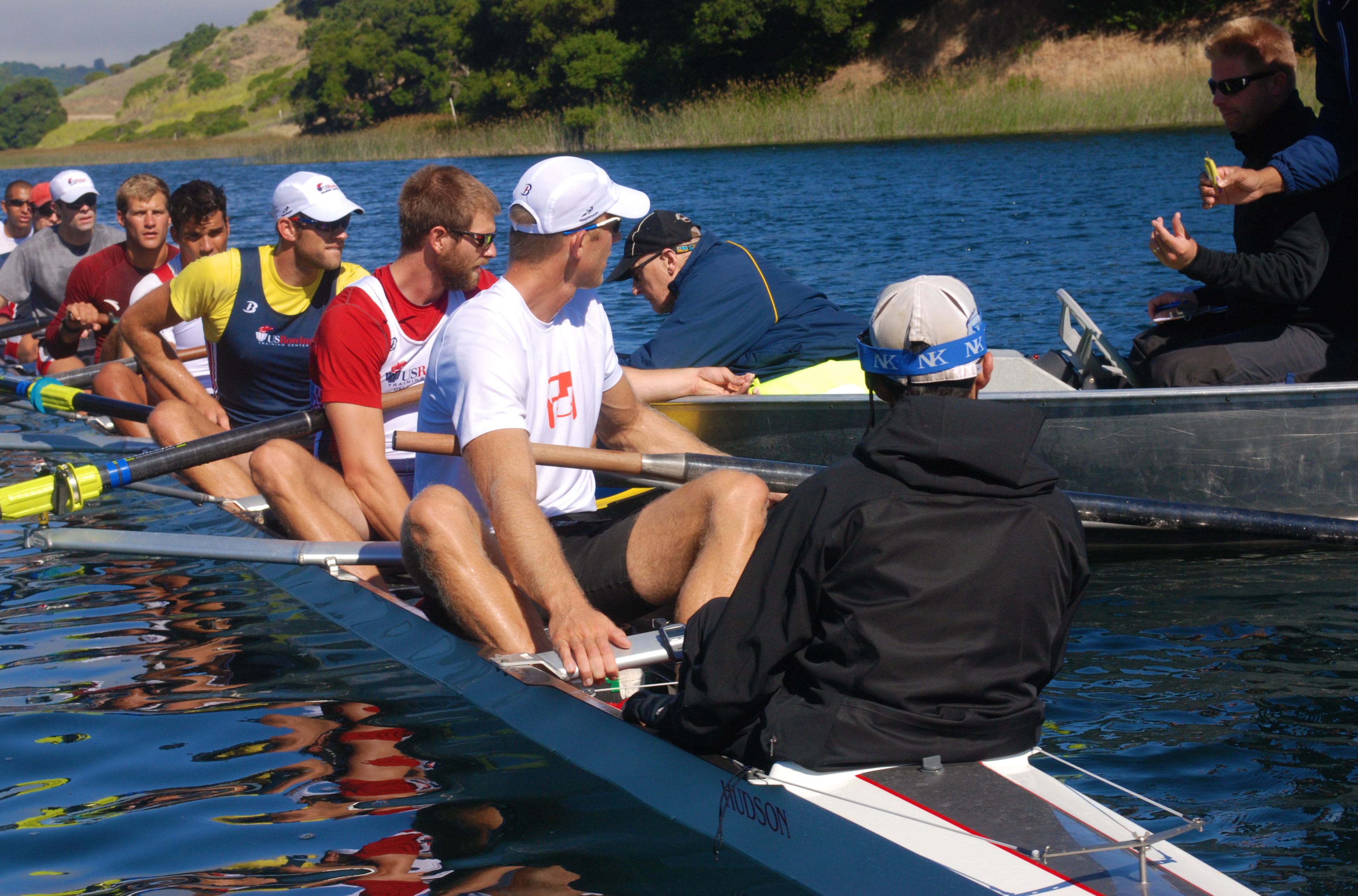 Later that week, the coach confers with his physiologists. The day before at a fast 1:40 erg pace, the men averaged lactate readings of just 3.76 mmol/ls (millimole's per liter), what experts consider a low rate. Today's faster rows generated higher readings -- between 6 and 10 mmol/ls -- because the men were pulling far harder. Lactate is a marker for lactic acid, what accumulates in our muscles when we exercise hard. Less lactate means they can row longer and faster.

Dr. Hagerman tells Teti that as a group the boat has great aerobic capacity. Adds Dr. White, after having analyzed 15 different variables for each athlete: "The values are going in the right direction -- the watts generated per kilo, the body composition, the lactate levels going down."

During the Olympics, Teti's men will need to battle the searing lactic acid pain that comes when they generate 15-20 mmol/ls of lactate in the first two minutes of a roughly five and a half-minute race. Then they'll have to muster a final sprint in the last 500 meters with lactate levels shooting into the low 20 mmol/ls. Like levels of hell there are levels of lactate suffering that must be endured to medal in rowing at the Olympics.

The physiologists' prescription for the final pre-Olympics workouts is a little more of the lactate threshold work Teti has already been doing -- short few minute pieces with high stroke rates bursting up into the mid 40s, building up painful levels of lactate that train the body to withstand the intense pressure of competition.

Teti knows the formula. At the 2004 Olympics in Athens, when he coached the U.S. men's eight to a gold, "they had to break the world record to win," he recalls. "They had to go to a place they had never been before."

The challenge now is similar. "They row long and comfortable," Teti says of this year's squad, then pausing for emphasis. "I want to make them not so comfortable. Once you start generating some speed it snowballs."

Time is short. This week the U.S. men's eight -- the last boat to London -- arrives at the U.S. Rowing training center in Princeton for 10 days of final preparation with coach Teti before they fly on July 19 to London for a shot at an Olympic medal.

Jonathan Littman is the founder of Snowball Narrative and co-author of The Art of Innovation and Ten Faces of Innovation.