The big guy with the golden hair and the chiseled grin straddles the rowing ergometer. There's a black heart rate strap wound round his bare chest. The coxswain seals a blue neoprene mask around the rower's jaw like a muzzle and then draws the clear plastic air cord to the side.

The rower looks like a cyborg plugged into a machine. He is 6'5" and 205 pounds of lean, sculpted muscle, and he is not alone. A short bespectacled gray-haired man with latex-gloved hands sits patiently by his side, clipboard in hand.

"Ready?" he asks a tall young man on the other side of the rower who checks a screen full of numbers and then nods. The rower slowly straps his tattered, disintegrating running shoes into the footboard, and the gray-haired man reminds him the pace of the first five-minute piece -- one minute and fifty seconds (1:50) for every 500 meters.

The rower slides his long frame up, and then hangs on the erg handle and drives back. The coxswain mimics the rower's rhythm with his hand and eyes, sweeping the air cord back and forth like a metronome. By the fourth stroke the big guy is clocking precisely 1:50.0 per 500 meters, his eyes locked on a distant wall with a giant framed flag of the Olympic rings. 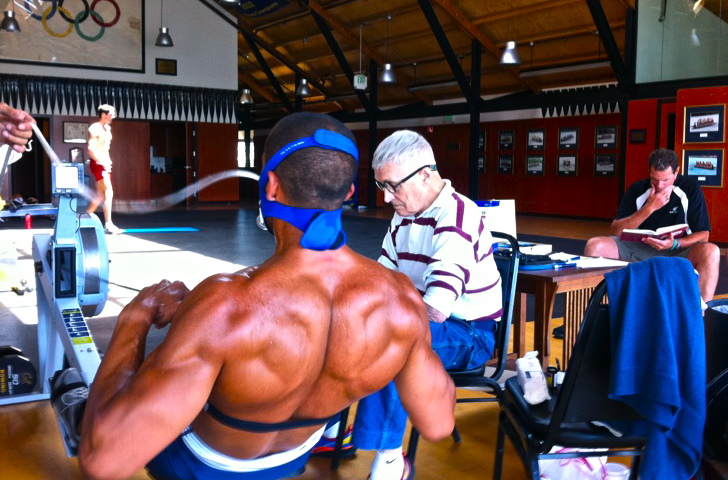 "Very nice," the gray-haired physiologist says with a smile.

Mike Teti, the lanky, square-jawed coach of the U.S. Men's Olympic eight team, ambles over and the physiologist points a gloved hand at his subject, Will Miller. "He's the second generation," a reference to the rower's father, who forty years ago competed for the U.S. at the 1972 Munich Olympics. "His dad had good numbers too."

This mid-June Sunday morning at the Cal Berkeley boathouse, every rower in the U.S Olympic eight will all have their fingers pricked, fat pinched, and oxygen intake monitored to fine-tune performance. In May, the team flew to Lucerne Switzerland to compete in the Regatta of Death, the final qualifier for the Olympic Games.

They won and became the Last Boat to London.

"He's the genius," says Teti of the gray-haired Dr. Fritz Hagerman, a renowned expert in exercise physiology who has worked continuously with the U.S. National Team since 1972, and at an astounding nine Olympics. "He has all this information on rowers going back to 1966. When I was the head U.S. rowing coach we could look at everybody's two-year or five-year numbers."

Teti has flown in Hagerman and his prodigy, the physiologist Dr. Jason White, from Ohio University for a simple reason. Though Teti's eight won the qualifier in Switzerland, the coach doubts they showed Olympic medaling speed. "Germany, Canada and Britain are strong," he shrugs. "To get to the next level we have to get faster."

Teti views Germany in a class by itself, with the next six boats tightly bunched. The testing is to determine "where we are good, and what we need." Teti wants to fine-tune the final workouts, and learn where they might gain an edge. So one by one the men line up for their turn.

"We're going easy on you today," Dr. Hagerman says to another shirtless lab rat, Jake Cornelius. "Don't worry -- no one has ever died." Wearing tattered old Converse high-tops and sporting an unruly beard, Cornelius is in a cheery mood because the test is not all out. "It's sub-max," he says happily. "I'm not gonna sweat!"

Dr. Hagerman pulls out a shiny steel John Bull caliper and starts pinching Cornelius' sub-scapula, triceps, thigh and other body parts, calling out the single digit numbers to Dr. White. Later these readings will render an approximate body fat percentage. Olympic caliber rowing is a brutal calculus of power, weight and endurance. Elite rowers carry only 8 to 9 percent of fat -- about half that of the typical fit young male. Non-essential fat is spurned like cellulite on a model.

When the strapping 6'6" 217 lb Cornelius finishes the third five-minute piece at a 1:40 per 500 meter pace, generating 350 watts, he really hasn't broken a sweat, incredible when you realize that most fit men couldn't pull at 1:40 for more than a minute.

Next up is Brett Newlin, NBA tall at 6'9" and 225 pounds. After the second piece at 1:45, he gently offers his left hand to Dr. Hagerman, who pricks his finger with a tiny lance and smears a few drops of blood on a test strip. He then places the strip in what looks like a tiny cell phone, a Lactate Analyzer. Thirteen seconds later he calls out a lactate reading of 1.9 mmol/l (millimole's per liter), a number that makes the physiologist smile.

Newlin, like his teammates, accumulates astonishingly little lactate in his blood while rowing at a moderate pace. The average fit male who struggled vainly to keep up with Newlin in this test would see his lactate rocket in minutes to 4 or 5 times Newlin's level (8.0 mmol/l or higher) and stop in excruciating pain. Lactate is a marker for lactic acid, what accumulates in our muscles when we exercise hard. Less lactate means Newlin can row longer and faster.

Ten minutes after Newlin finishes his test, he and Cornelius drag two ergs under the Olympic banner for the morning's real workout, a routine all eight rowers tackle -- two 20-minute pieces at faster than the last 1:40 pace of the test. Each piece ends with a thundering all out minute, the erg fly wheels screaming and the machines shaking under the load of the big men pulling at 1:21, generating a stunning 635 watts, about 100 watts shy of one horsepower.

The testing and workouts consume nearly five hours. Zach Vlahos, the steady coxswain, guides the air cords rhythmically back and forth for the men. There's Giuseppe Lanzone, the part-time model, barefoot today, who like Newlin is competing in his second Olympics. There's Steve Kasprzyk, the easy-going 6'7" gentle giant who enjoys mountain biking and marathon running when he's not rowing. And there's the James twins (Grant and Ross) both engineers, both 6'5" and today both exactly 188 lbs. 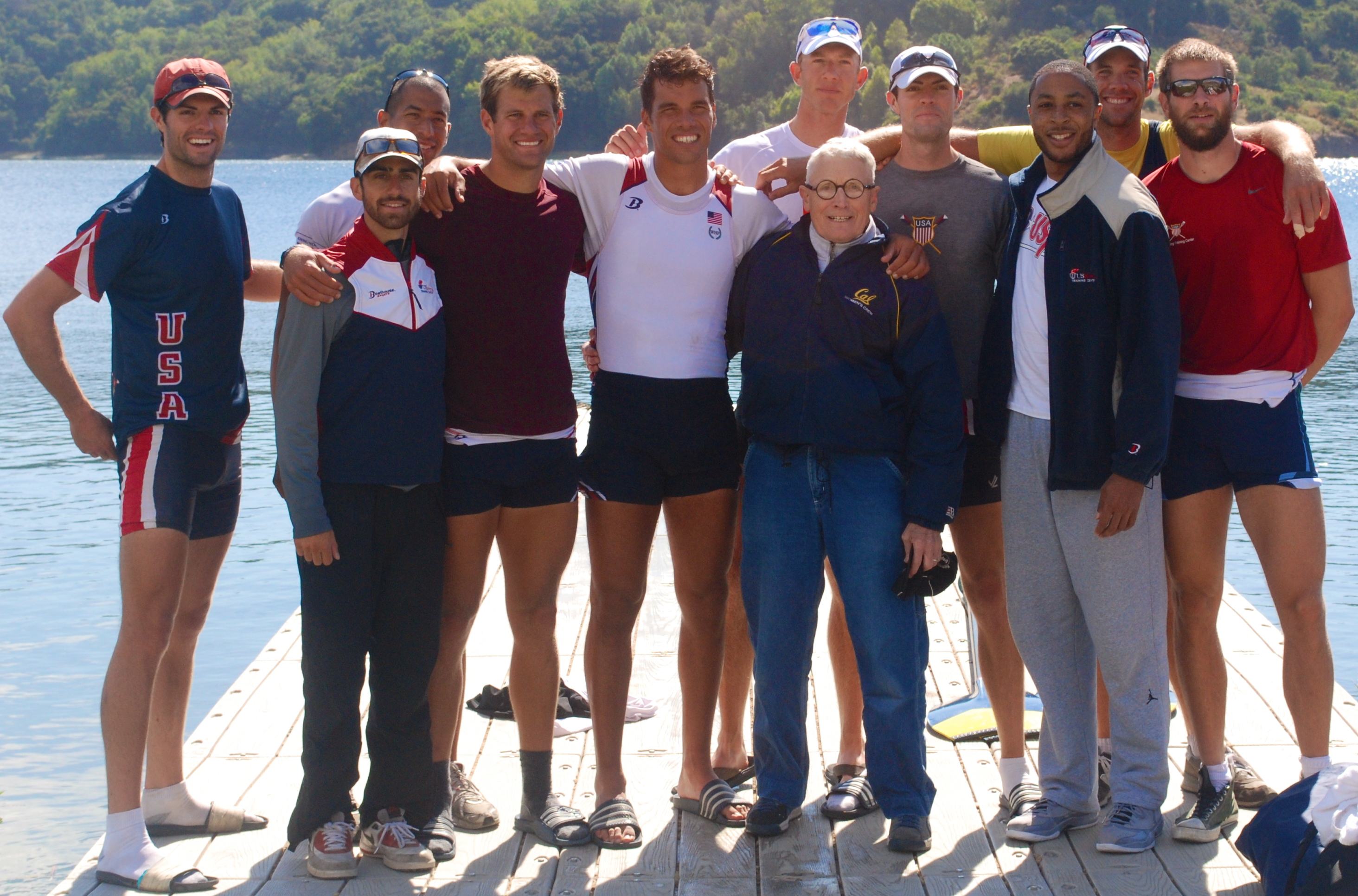 There's a running bet on who will be crowned the leanest rower, and the slender Grant James looks like a shoe-in, but then David Banks saunters up and Dr. Hagerman rattles off caliper numbers that are later calculated to approximate just a shade over 7 percent body fat, beating Grant James by half a percent. Teti laughs at the irony. "There's no one that eats more than David Banks," he says. "David eats more than any four people."

Banks, like all of these men besides Lanzone didn't row till college, proof of Teti's theory that Olympic caliber rowing in the U.S. today is largely about cultivating and training elite athletes. Teti says it's about finding talented individuals with the drive to transform themselves into extraordinary physical specimens.

"He's solid, completely self-made," says Teti of Banks, the team's lone African American, a walk-on athlete on the Stanford crew, who ran track in high school and rose to become the 2009 U.S. Rowing athlete of the year. Since his freshman year Banks has packed on 30 pounds of new muscle in his back, shoulders, arms and thighs -- 195 pounds designed to drive an oar through the water.

The 6'2" Banks is the last to ease into the erg, short in a sport where long legs and arms are prized as long levers. But there's a rippling muscle on the side of each enormous thigh that looks extra -- like a power pack. And when he drives back and finishes each stroke, the sight is almost frightening, like nothing I've ever seen before, heaving back muscles that hinge and bulge like the Incredible Hulk...

Jonathan Littman is the founder of Snowball Narrative and co-author of The Art of Innovation and Ten Faces of Innovation.