The Olympic men’s triathlon needed a do-over Monday when a bizarre start sent dozens of competitors into the water only to have others stuck on the dock, helplessly blocked by a boat containing cameras that got in the way.

The 56 competitors had taken their marks when the starting buzzer sounded, and about half were in the water before the boat moved in, then tried to reverse out of the way.

It took about 13 seconds before the buzzer sounded again signaling a false start, but not everyone heard it and some kept swimming, sending Olympic support staffers to chase them down with personal watercraft. Some of the initial leaders were 200 meters out before they eventually stopped swimming and came back.

Among those already in the water was eventual winner Kristian Blummenfelt of Norway, silver medalist Alex Yee of Britain and bronze medalist Hayden Wilde of New Zealand.

“I saw the boat like going past the pontoon, and I was like surprised that I had this start so quickly, and I saw on my left side that there was the camera boat in front of midgroup,” Blummenfelt said.

“So when I swam the first 50 meters I was aware that this couldn’t be right,” he said. “I looked at (it) as a positive thing, as I hadn’t been swimming for 30 minutes. It was good practice.”

Wilde was bummed his good start was wiped out.

“When I jumped in, it was at full gas and I was like, ‘Oh man, I’ve had an absolute blinder of a start,’ and then realized half the field wasn’t even in the water ... I was pretty gutted,” he said.

“But it was actually quite good. If you take it in a positive way, we’d been waiting around the start for 25 to 30 minutes. So for me it was great to get 50 meters at full gas and warm the arms up a little bit.”

The race was restarted about 10 minutes later.

Not everyone came through the bad start unscathed.

Australian Jake Birtwhistle told the Sydney Morning Herald that his nose was broken when he got kicked in the face. He still managed to finish 16th.

“It was one of the roughest swims I have been in,” Birtwhistle said.

PHOTO GALLERY
Games That Will Never Make It To The Olympics 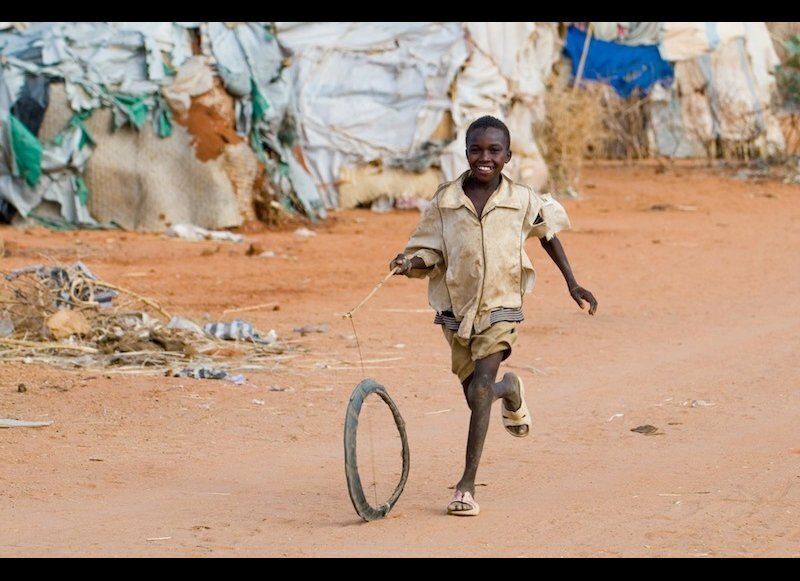 1 / 7
Darfur
In the Dereig refugee camp in Darfur, this little boy has found a way to have fun using a homemade hoop.
(Jon Warren/ World Vision)