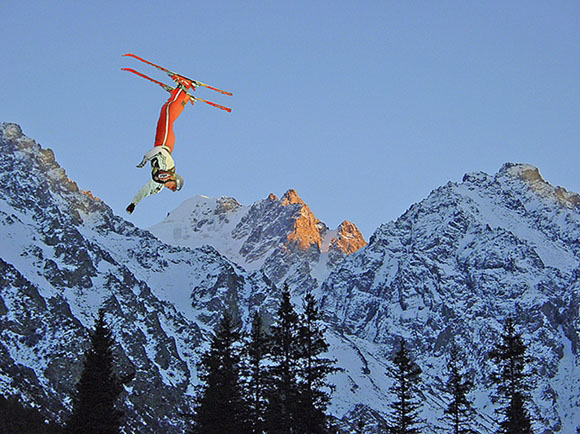 When I qualified for the Freestyle Skiing World Cup tour, I began competing with athletes from all over the world. As an unknown skier my first year on the tour, I had no sponsors, and my parents had to support me financially. I wanted to prove to them that I wasn't going to waste their money. And I didn't.

Four times in that first year I placed in the top three, even winning in my fourth World Cup competition ever. By the end of the season, I found myself in ninth place worldwide. I couldn't wait to take the videotape of my contest jumps home to show my parents how effectively I'd used their money.

I popped the tape in the VCR and we sat down to watch it together. Now, while it seems forever when you are in the air, an aerialist is actually airborne for about three seconds -- as compared to the top basketball players, who are airborne for one. I competed in a total of ten contests that first season, with two jumps per event, so the whole tape was about sixty seconds long. After we viewed it, I eagerly sat at the edge of my seat, awaiting my parents' response. We sat there in silence for another thirty seconds. I figured they must be pondering the praise they were going to pile on me, but my father, ever the comedian, had other thoughts. He finally turned to me and asked, "I just spent fifteen thousand bucks for thirty seconds?"

Being caught off guard, I had no clever reply. But I did heatedly explain that a lot of work went into those thirty seconds, and that I had to really make sure I was "on" when it counted most. My dad quickly agreed on the importance of working hard and making sure you bring your "A game" to those key moments. As I've always said, it does you no good to bring a practice session.

Two years later, bringing enough "A games" to the competition hill helped me qualify for my first Olympics. I was so excited that I might have a chance to win the medal I'd dreamed of since I was five years old.

I quickly learned that it wasn't just my expectation, but that of my family, my friends, my hometown, my home state and my country. The hundreds of letters people sent to encourage me unintentionally threw a world of weight on my shoulders. Everyone had expectations about me bringing home an Olympic medal for the U.S.A.

And their hopes had some basis. As I entered the Olympic Games, I was ranked third in the world. There was certainly a chance I might bring home one of those big, shiny medallions. Though some people would find this motivating, I just found it added more unwanted pressure.

I arrived at the games a few days before the opening ceremonies, and had to wait a full two weeks before my competition began. At the Olympics, aerialists have a semifinals contest where all competitors take two different jumps and add their scores together. The top twelve women and top twelve men qualify for finals, starting over with a clean slate.

I woke up on the morning of semis and was blown away by how much greater the pressure felt for this event. The world was suddenly interested in aerial skiing, when most people couldn't have told you what the event was just two months earlier. One of my coaches told me to try to imagine it was like every other day -- just like training. Well, the problem was that every other day I didn't have thirty thousand people surrounding the landing hill and another twenty million watching from their armchairs back home. It was pretty hard to imagine this was like every other day.

The random run order listed me last to jump. This meant I had to wait for all the other women to jump before it was time for me to take my place on the hill. Finally, it was my turn to slide into starting position. I somehow managed to calm myself enough to push off for my first ever Olympic jump. I went off the ramp, did two black flips through the air and executed a full twist on my second flip. My form was impeccable, with a perfectly straight position, and I landed the jump with very little impression on the snow. Being the last competitor, I would know my first-round standing right after my score went up on the board.

My score popped up on the scoreboard almost immediately, and in the bottom corner, right under the word Rank, flashed the number 1. I was at the Olympics and I was in first place! I started thinking that maybe I could bring home one of those renowned shiny medals. I could follow in the footsteps of some of my Olympic gold medal idols by appearing on David Letterman, and my hometown of Westborough, Massachusetts, would have a parade for me. I wasn't even in the finals yet and I was already thinking about winning a gold medal.

I went back up to the top of the hill with images of medals floating in my head. And with these thoughts of Olympic glory, I forgot about everything else going into my second jump. I did two flips and two twists, and thought my jump was impeccable. But it wasn't exactly impeccable... I finished my last flip and realized I was still three feet off the ground. My skis skimmed past the ground and I cascaded on my back along the snowy hill.

I quickly bounced to my feet in hopes of minimizing the judges' impressions of my fall. I skied to a stop at the bottom of the hill and awaited my score. As luck would have it, the electricity went out just then and the scoreboard went dark. I was the last female athlete to jump, so my impending score would tell me specifically if I would be one of those twelve fortunate women going on to finals.

I had to wait a full five minutes before they announced my score. As I was waiting, I thought about how a few other women had touched a hand down on landing, or had poor form in the air. I was in first place after the first round, so could literally drop eleven places and still make it to finals, where the top dozen athletes would start over with a clean slate.

After much anticipation, a booming voice came over the loudspeaker. "From the United States, Nikki Stone... Thirteenth place!"

Thirteenth place! I couldn't believe it! I hadn't just missed finals, I'd missed by a mere 0.57 of a point. Less than one point out of over 200 points. It was devastating.

And what was even harder to take was that the woman in twelfth place, the athlete I would have bumped out of finals with just over half a point more, went on to win the first ever Olympic medal in the sport of aerial skiing. That woman was Lina Tcherjazova, an extremely talented aerialist from Uzbekistan. I wasn't disappointed because I thought Lina didn't deserve that medal -- she definitely did. I was disappointed because I basically handed it to her.

I had to watch as she took her place on the top of the Olympic podium and had that shiny gold medal draped around her neck. I held back tears as the Uzbekistan anthem started to play. As I sat and listened to her proud national anthem, I realized that I had a very valuable lesson I should be taking away from the day. If I was going to start building my hard outer shell, I had to make sure I was focused on the task at hand.

I was thinking of the "big picture" rather than what I needed to do in order to achieve that big picture. My thoughts were bouncing everywhere but where they should be: on the elements of my jump. Lina may have had dreams of gold in the back of her mind, but she had been able to shelve those thoughts long enough to focus on the specifics of the task at hand.

I always hated when life taught me these crucial lessons at such significant moments...before the eyes of the world. Regardless of whether I wanted the lesson or not, it was presented to me and I would be a fool not to learn it. There are so many distractions in life and if we don't build a hard shell to defend against their enticements, we'll be sucked into mediocrity.

I've had the great honor of working with some of the Biggest Loser contestants and it has inspired me to leave motivational diet, health, and wellness tips at the end of all of my blogs. These tools have been driven from actual advice I've shared. This week's tip: People are often afraid of setting health and fitness goals because of fear that they won't reach them. Remember that you may not reach all your goals, but you'll certainly go further than you would have if you didn't set any!