The Summer Olympics are about to begin and this year they are being held in London for the third time and the first since the Post-War Games in 1948. Millions of spectators are traveling there to see 10,500 athletes from more than 200 nations compete in 32 sports at the highest level of competition.

Gymnastics, track and field, swimming, soccer and cycling have always dominated the Summer Olympics. Newer sports like beach volleyball have grown enormously in popularity. But many of the original events from the Ancient Greek Olympic Games continue on: the marathon, discus throw, javelin toss, running and wrestling.

For too long the world has failed to recognize that the Olympic Games and the Olympic Movement are about fine athletics and fine art. -- Avery Brundage

I recently saw an original and inspiring exposition in New York that combined food and art with an Olympic twist. The IMAFestival opened in Milan, then traveled to New York in June, and is in London now for the Olympic Games. Called Sport Your Food, this innovative and inspiring exposition created by writer Rossella Canevari and producer Elena Manzine asked five chefs and five artists to team up as a couple and create a recipe and a work of art inspired by one of the Olympic sports. Below are photos of the exciting results from one of these pairs: the talented Apulian chef Cristina Bowerman and visionary Sicilian painter Fulvio Di Piazza. Chef Cristina Bowerman chose to interpret the discus throw in a splendid culinary dish depicting the discus hitting the earth and smashing into pieces. And Fulvio Di Piazza was inspired by the movement of the discus thrower in his exciting, masterful painting, Bruscobolo. 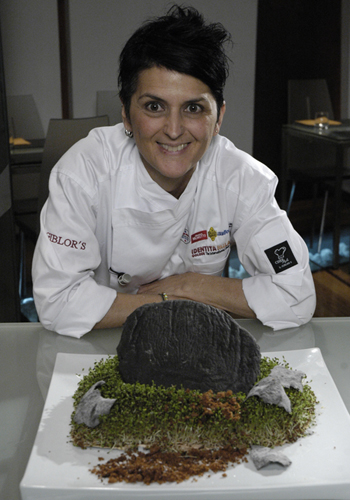 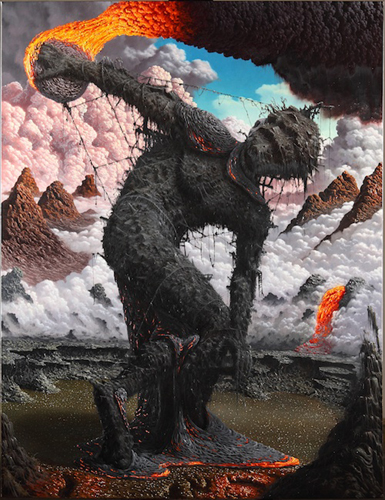 We all grew up watching the Olympics on TV. Who doesn't dream of being an Olympic swimming champion like Michael Phelps? My family has a special personal Olympic story. In 1992, my brother, P.J. Carlesimo, was one of the coaches for the U.S. Men's Basketball Dream Team that went to the Summer Olympics in Barcelona. It is still the team by which all others are measured. It featured Michael Jordan, Larry Bird and Magic Johnson and was the first team to accept NBA players. Sports Illustrated later stated that the Dream Team was "arguably the most dominant squad ever assembled in any sport." Since Barcelona, basketball has become a premier Olympic event. The Dream Team was admitted to the Naismith Memorial Basketball Hall of Fame in 2010.

"It was like Elvis and the Beatles put together. Traveling with the Dream Team was like traveling with 12 rock stars. That's all I can compare it to." -- Coach Chuck Daly

As London prepares for the arrival of these millions of visitors, I asked several English friends what they would serve this summer if they were hosting an Olympic party in their London flat or home. There was a spirited debate but they ended by agreeing on a very traditional, very tasty dessert -- English Trifle! They felt it would be the perfect thing to serve outdoors watching rowing on the Thames; or indoors watching swimming and diving events on the telly. Of course, you have to add a prayer that it doesn't rain to the recipe, especially if you are hosting an outdoor party!

So I am going to leave all of you with a recipe for English Trifle so that you, too, can host a party this summer for the London Summer Olympics in your own home wherever you are. This is a recipe from a dear family friend Naomi, who lives in Henley-on-Thames, where the rowing events are held. Naomi's recipe is a summer trifle with raspberries and blackberries. Make some, and feel a sense of solidarity and community with our English hosts in London. Enjoy it! And enjoy the Games!

In a trifle glass bowl, (8 inch diameter and 5 inches deep), place large pieces of the sponge cake, upside down, in the bottom of the bowl. Pour the Sherry evenly over the cake. Then, in a small saucepan stew the blackberries and 4oz of the raspberries with 2oz of the sugar. This will take about five minutes. Let this fruit stew cool a little and pour over the cake. (Some folks use strawberry jam in place of the fruit stew.)

Next layer the rest of the fresh raspberries. The next layer is the banana, and then the custard. Make sure the custard is room temperature because we don't want to cook the bananas below.

Then whip the cream with the remainder of the sugar and pour over the custard layer. Garnish with the lightly toasted almonds.

It is best to keep the trifle in the refrigerator for a few hours, or even overnight.