When a strange, milky-white object glided over the Olympics opening ceremony and was caught on video, there was chatter that this was the extraterrestrial visitation for which UFO researchers are constantly searching.

Now we know the truth behind the strange object spotted amid the pyrotechnics spectacle. It was Goodyear's "Spirit of Safety" blimp. And a spokesman for the company tells HuffPost why the aircraft appeared so mysterious.

To put it simply, the Goodyear name wasn't on the airship, even though it was illuminated the entire time.

"I can definitely tell you we were up in the air for the entirety of the opening ceremonies. I can't speak to what else was in the air, but the blimp was certainly up there during the fireworks," said Goodyear U.S. public relations manager Doug Grassian.

"During the whole ceremony, we were providing the coverage for NBC, so we were up in the air the whole time [with our ship] the Spirit of Safety," Grassian told The Huffington Post.

Check out these images of the Goodyear blimp that appeared over the Olympics ceremonies.

Three days prior to the start of the Olympics, the Associated Press reported that William Hill, a London betting house, had offered 1,000-to-1 odds that a flying saucer would appear over Olympic Stadium during the opening ceremony. So, people in the U.K. were already wondering -- and betting on -- if such an event would occur.

Alas, it was only Goodyear's Spirit of Safety that showed up in the restricted airspace above the stadium.

The word "Goodyear" -- which normally appears on the blimp -- was removed, adding to the confusion and misidentification of the blimp as a UFO.

"Because we're not a sponsor of the Olympics, we had to take the Goodyear branding off of it," Grassian explained. "That's why when you look at it, you probably just see blue and yellow with no words on it. It will remain that way until the Olympics are done."

This isn't the first time a Goodyear blimp has been mistaken for a UFO.

"It happens occasionally," Grassian said. "I've been in this job roughly two years, and I've seen a couple of incidents where people have called us to ask if the blimp was around because they thought there was a UFO [in the area]."

Those London betting offices probably didn't have to pay off any UFO wagers this time around. 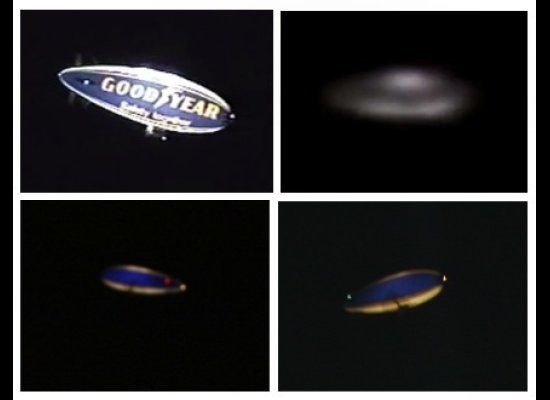 1 / 5
Composite Image of Goodyear Blimp
This image shows four configurations of a Goodyear blimp. Upper left displays normal Goodyear branding name; upper right is a close-up from a video taken at the London Olympics opening ceremonies on July 27, 2012, showing what appears to be a disc-shaped UFO; bottom left and right are images provided by Goodyear that clearly show their blimp (sans branding name) over the Olympic ceremonies.
Courtesy Goodyear