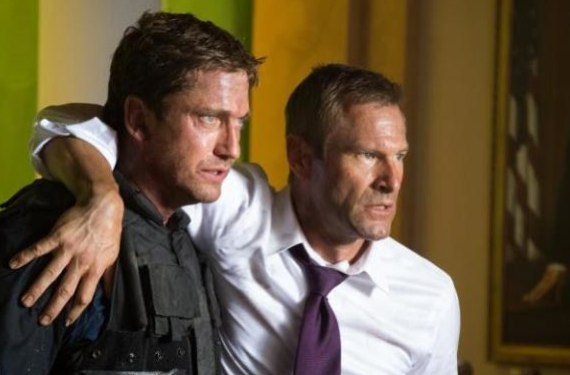 Q: Did you have to sign a contract promising that you wouldn't talk about Olympus Has Fallen until a certain date?

A: Yes. And this is never a good sign.

Q: In this case, was that contract unwarranted?

A: Let's just say that such contracts make it difficult to enter a movie without harboring preconceived notions about said movie's quality. In this case, the contract was unwarranted.

Q: Wait, is there a chance Olympus Has Fallen is good?

A: Put it this way: if this had been A Good Day To Die Hard, we would have all been thrilled with what a great Die Hard movie we just watched. This really is "Die Hard in the White House."

Q: Why is John McClane in the White House?

A: OK, it's not really "Die Hard in the White House." Instead of John McClane, our hero is Mike Banning (Butler).

Q: Who is Mike Banning?

A: Banning is a Secret Service agent who used to be on the president's detail but now works at the Treasury Department.

A: It's established that Mike Banning once told the Speaker of the House to "go fuck himself," though we don't witness this, so it could just be hearsay.

Q: Is this the sort of movie in which the main characters all complain about just how old they are, even though every one of these actors is in better shape than 99 percent of the general public?

Q: Why is Mike Banning no longer on the president's detail?

A: When the film opens, we see a horrific traffic accident involving the president's motorcade. During this accident, Banning manages to save the life of President Asher (Eckhart) but not that of the First Lady (Ashley Judd).

Q: If I'm a huge Ashley Judd fan, am I going to be disappointed by the screen time that she has in Olympus Has Fallen?

A: If you count the photos of her that President Asher uses to remind the audience that, months later, he's still sad ... well, even then, yes, you will be.

Q: Wait, why isn't Mike Banning still guarding the president? It sounds like he did his job.

A: Mike Banning and President Asher are good friends, but the sight of Banning reminds the president too much of his late wife.

Q: How do we know that Banning and Asher are friends?

A: The movie opens with the two men boxing, as all good friends do.

Q: In the universe that "Olympus Has Fallen" takes place, does the movie Double Jeopardy exist? Would watching that movie upset President Asher?

A: It's not specifically addressed one way or another, but if the movie Double Jeopardy does exist, it can only be assumed that it would upset President Asher.

Q: What is Olympus and how does Olympus fall?

A: Olympus is the code name for the White House and it falls after a very elaborate assault by the North Koreans.

Q: Is this assault terrifying?

A: There are a lot of disturbing images of Washington D.C. residents and/or tourists being slaughtered by machine gun fire after an unauthorized plane enters D.C.'s airspace.

Q: Wouldn't that plane be shot down immediately?

A: Yes. But, in this case, it takes a while. At the same time, a ground assault on the White House is taking place by disguised tourists and a group posing as South Korean diplomats who happen to be meeting with both the president and the vice president. As a result, those two, along with the Secretary of Defense and the Chairman of the Joint Chiefs of Staff, are all taken hostage inside of the White House.

Q: In real life, would this assault have any chance of succeeding?

A: You're thinking of the Red Dawn remake. At least in Olympus Has Fallen the enemy has a goal in mind other than "occupying the state of Washington."

Q: What is that goal?

A: The leader of the North Korean groups needs a code from each of three high-ranking U.S. officials. With this code, they can cause all of America's nuclear warheads to self-destruct.

A: They also want U.S. troops to withdraw from the DMZ.

Q: If I don't like watching people being shot in the head, should I see Olympus Has Fallen?

Q: Who becomes the acting president?

A: The Speaker of the House, played by Morgan Freeman, becomes the acting president.

Q: At what point do they tell Morgan Freeman's president about the impending asteroid strike?

Q: Is there anyone left in the White House who can save the president?

A: Just one, Mike Banning -- hence the Die Hard comparisons.

A: As stated, Olympus Has Fallen is extremely violent and, at times, disturbing. But, if you like the "one lone reluctant hero, trapped in a confined space, is the last chance to save the world" formula, you're going to like Olympus Has Fallen. Quite surprisingly, I will add again.

A: Not quite. Though "I'm going to stab you in the brain" is sure close.