In cities across the nation, increasingly diverse after waves of immigration and demographic changes, it's not uncommon to find Christian, Jewish and Islamic houses of worship located just blocks away from one another.

But in Omaha, Neb., an interfaith organization is taking such a pattern to the next level. Tri-Faith Initiative, a partnership of Christians, Jews and Muslims that aims to foster greater interfaith relations in that Midwestern city, is kicking off a multimillion-dollar effort to bring the three Abrahamic religions onto a single 35-acre campus.

"We thought, let's intentionally choose our neighbors," says Vic Gutman, a spokesman for the Tri-Faith Initiative, which launched five years ago as a grassroots interfaith effort and quickly gained funding and community support among the city's religious leaders. "We want to form a relationship between all Jews, all Muslims and all Christians."

The group, which announced this week that each religious group had closed on land purchase deals for the interfaith campus that total $5 million, will also build a Tri-Faith Center that will have educational and social facilities for use by all the campus' religious groups.

Gutman says the project is one of the first in the nation to intently build houses of worship of the three Abrahamic faiths next to each other. Temple Israel, an 800-family strong Reform tradition synagogue that's the oldest and biggest Jewish house of worship in the state, has plans to open by the High Holy Days in 2013.

Unlike the synagogue, the church, built by the Episcopal Diocese of Nebraska, and the mosque, which will be housed in a larger Islamic educational and cultural center, don't have pre-existing congregations. Both of those are expected to open after the synagogue, and construction is expected to finish on all buildings by 2015. 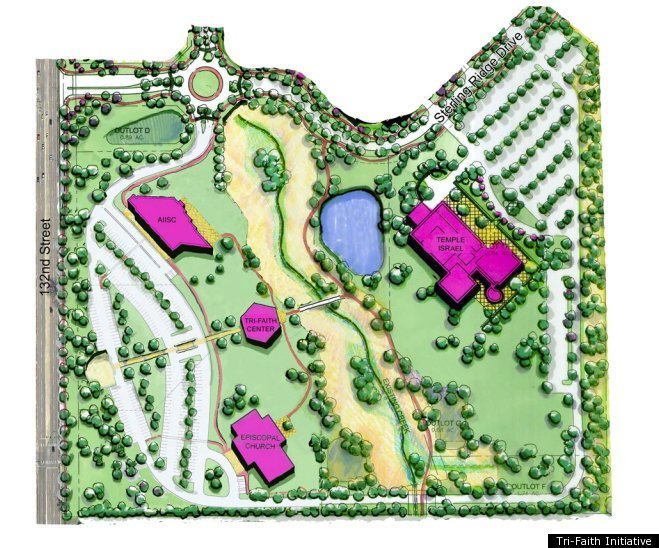 The interfaith campus, which will be on the site of a former Jewish country club that was created in response to anti-Semitic policies at other country clubs, "will provide an opportunity unlike any other in the world for those who come to call this campus home," the Rt. Rev. J. Scott Barker, Bishop of the Episcopal Diocese of Nebraska, said at a press conference.

Barker called the effort "an opportunity not only to learn to tolerate people of different backgrounds and beliefs and aspirations, but to find ways to even celebrate all we have in common, to learn and grow precisely as women and men and children who experience God in different ways and call God by different names."

On its website, the Tri-Faith Initiative is already promoting its own interfaith prayer. "Our vision is to build bridges of respect, acceptance and trust, to challenge stereotypes, to learn from each other and to counter the influence of fear and misunderstanding," it reads.

Such words echo those of John Lehr, President of Temple Israel, in remarks he gave at the conference.

"During this time of great economic and geopolitical uncertainty, our congregants have made such a bold and committed show in support of our future. That our Episcopal and Muslim friends have successfully cast their votes as well ... surely bodes well for the times that are upon us and for the community which sustains us," he said.

Syed Mohiuddin, president and co-founder of the American Institute of Islamic Studies and Culture, added: "We are an interrelated unity and should and can be working partners in the service of God."