If you're still looking for that pot at the end of the rainbow, you should get to Omaha, Nebraska ASAP.

The Bemis Center for Contemporary Arts has held over artist Michael Jones McKean's The Rainbow through October. That means the skies over Old Town Omaha's cobblestone streets will feature an honest-to-goodness, manmade rainbow every Thursday, Friday and Saturday night through October 28.

Playing weatherman (some might say God) is an ambitious undertaking, one that requires harvested rainwater, atmospheric scientists, engineering experts, six 10,500-gallon water tanks, a custom-designed 60 horsepower pump and extensive building modifications. But then that's what the Bemis Center is all about -- making artist's dreams true. 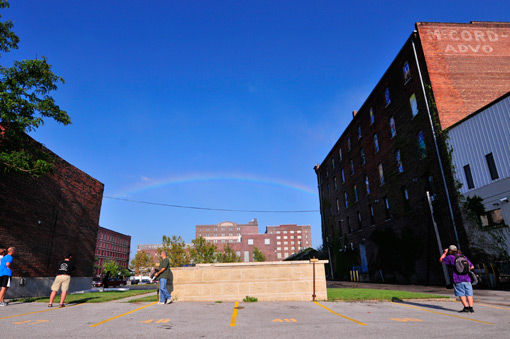 Since 1984, their artist-in-residence studio program has given hundreds of local, national and international artists studio space, living accommodations and a monthly stipend. That generosity has produced everything from an interactive cotton candy exhibition created by Chinese artist Ying Zhu to Tilly and the Wall's "Bottom of the Barrels" album. In 2005, this Coachella favorite (along with their tap-dancing drummer) were the Bemis' first band in residence.

"The support we offer gives artists the chance to experiment with something new, to veer off in whole new creative directions," says Hesse McGraw, head curator at the Bemis who helped line up the elaborate equipment required to produce Jones McKean's on-demand rainbows.

Touring us around the former five-story industrial warehouse's three main galleries and spacious studios, McGraw led us by a wooden set being built by current fellow Meredith James.

"I think I've found your goats," McGraw assured her, explaining to us that anything an artist needs, Bemis finds a way to supply it. Jones McKean, for example, requested a Bristlecone pine tree, the oldest living thing on the planet, to accompany his ephemeral rainbow. McGraw, like always, managed to secure one.

"We have a very accommodating fan base," he said. "Omaha is extremely generous with its artists."

As for Jones McKean, a Guggenheim recipient, a former Bemis fellow and now a sculpture professor at Virginia Commonwealth University, he'd been playing with creating public rainbows for ten years. But it wasn't until the Bemis charitably ponied up the means to make it happen that the full-size technicolor arcs became a reality.

Every weekend night at approximately 6:30, the collected rainwater sprays from nine nozzles on the Bemis roof, producing the kind of dream-like rainbow about which Dorothy sang. A good half of the 130-foot wall of water lands back on the roof, ready for reuse the following night.

Even though the specially-installed tanks can collect up to 8,000 gallons from a single inch of rain, this summer's drought put a dent in the summer-long spontaneous performances which is why the rainbows are still available through October. But don't dawdle.

Like a rainbow itself, the magnificent public art exhibit won't last forever.

More:
travelcoachellarainbowsBemis Center for Contemporary Arts
Newsletter Sign Up
An essential daily guide to achieving the good life
Subscribe to our lifestyle email.
Successfully Subscribed!
Realness delivered to your inbox