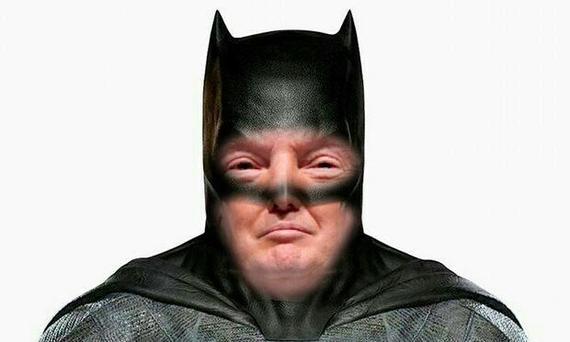 Why is the Batman franchise so successful? It tells a compelling story of individual heroism versus systemic and environmental evil. The story is told on a backdrop of American society that is bleak, dark and grim; ripe with corruption in law enforcement and general malaise. If you looked at any big, modern American city through a strictly cynical lens, you could see Gotham City.

The narrative then draws us into a story of Bruce Wayne, a super-wealthy...

"celebrity socialite...who averts suspicion by acting the part of a superficial playboy idly living off his family's fortune, which was amassed through investment in real estate before the city became a bustling metropolis." - Wikipedia's Batman Entry

Bruce Wayne then transforms himself into the oft-misunderstood, frequently-scapegoated, and underappreciated-yet-ingenious superhero who is uniquely capable of undermining corruption and villains, saving Gotham City and its people from being unfairly victimized.

While it's true that Bruce Wayne is primarily driven by the murder of his parents in the mythic Batman universe, the rest of the parallels almost perfectly click into place: Donald Trump thinks he's Batman. And he sees America as Gotham City.

In his nomination acceptance speech in Cleveland, Trump told America he believed that he, alone, can fix the political system, but he also promised the country he would actually put an end to crime and violence.

Trump: "The crime and violence that today afflicts our nation will soon -- and I mean very soon come to an end."

This is not so different from Batman's promise: "I made a promise [...] that I would rid this city of the evil."

In terms of campaign promises, Trump's assurance that he will not only fix the political system single-handedly, but also bring crime and violence to an end in America, sounds much more like a platform for a superhero in a mythic universe than a presidential candidate in the real world.

In doing research for this article, I stumbled across an amusing story captured by the Washington Post: When asked by a child in his helicopter if he was Batman, Trump answered that, yes, he was Batman. Given the context of this quote, it would be irresponsible to take him too seriously, but it is interesting to consider that -- especially in light of his acceptance speech -- he very well might see himself as some kind of superhero in some way.

In fact, it's not out of bounds to consider the possibility that Trump suffers from hero syndrome. I suggest that you click on the hyperlink to see if you think Trump fits the definition of someone who may suffer from this disorder.

In an era where unemployment is at a historically stable 5.5%, indicating that nearly all Americans can get work if they want it, and crime is as low as it has been in 50 years, the statistics belie the feeling that millions of Americans share: their country is not on the right track, and there is no clear path to feeling safer, more at ease, and more comfortable.

Given that America's national politicians appear ill-equipped or unable to change the current dynamic, it's understandable that people have lost their faith in civics and are now looking for new ways to shake up the status quo.

A recent article in The Guardian posited that Americans are now looking for superheroes, and have found one in Donald Trump. In what could be an advantage for Trump, it's a good time to think you're Batman when an increasing percentage of people are looking for Batman. And, if he's smart, Trump will not-so-subtly assign The Joker role to Hillary Clinton.

So Donald Trump has been playing Bruce Wayne and is now promising to turn into Batman as President. Can this really happen? While certainly possible, sadly for Trump and his supporters, it's unlikely.

Just as in the Batman universe, America's real Batmen are typically not elected officials. Ask Pat Buchanan, Howard Dean, and even Bernie Sanders: You're unlikely to be a Crusader-in-Chief and still be the Commander-in-Chief in America. These are such diametrically opposed roles that there is no American leadership framework that combines the two. Generally, one is either on the outside crusading, or on the inside administrating. True, there are some exceptions to this rule, such as Adolph Hitler who crusaded while administrating, but this example is precisely the reason why, in America, we don't eagerly accept mixing the two.

As common as it is for people to make our Presidents into superheroes or supervillains, the reality is that Presidents have limited power based on our Constitutional framework and separation of powers.

Batman may have Robin, but the President has Congress and a Supreme Court. You can't do much crusadin' with two branches of government tied to your cape.

Should Trump become a Batman President, it would play out like the "real" Batman needing to get permission from Robin and Commissioner Gordon before he did anything. This would not make for a very compelling Batman story.

P.S. As I was developing this article, David Brooks from the New York Times released an editorial about Trump's acceptance speech entitled The Dark Knight. Perhaps I'm onto something.