The late Joan Rivers was famous for pushing the envelope as hard and as far as possible. One of her signature lines ("Can we talk?") may disappear from the vernacular in years to come.

In recent years, the phrase "That's so gay!" has come under fire for its pejorative use by younger generations. But for those who lived through the Stonewall riots, the Castro clone subculture, and the darkest days of the AIDS crisis, "That's so gay!" often had quite another meaning. Whether used to describe performance art or fashion, "That's so gay!" indicated recognition and approval of someone's effort to stand out from the crowd.

From Stewie Griffin to Rick & Steve: The Happiest Gay Couple In All The World; from The Ambiguously Gay Duo to Queer Duck, some characters and popular entertainers are so flamboyantly gay that there is simply no point in arguing about it.

The Bay area's oldest and largest gay theatre companies scored strongly last fall with shows that were custom made for gay audiences. One had previously been presented in 2012 at DIVAFest; the other was a raucous world premiere that made the most of a limited budget and the playwright's fertile imagination.

Halloran's idea for building a monologue around pussy came from real life:

"Originally inspired by a lesbian couple I knew in Vancouver whose insane indoor cat loved one woman and hunted the other as prey, this piece grew to explore 'outsider' identities in queer community, mixing my own narratives of faith, divorce, and abusive relationships and generous interviews with queer friends and artists. Very loosely based on true events, this piece is a tribute to the tribulations of trying to find your groove when you don't like the music. It's a tale of love, sex, love-sex, hate-sex, vampires, unicorns, softball, faith, and three outsiders whose fates triangulate around one spectacular cat. " 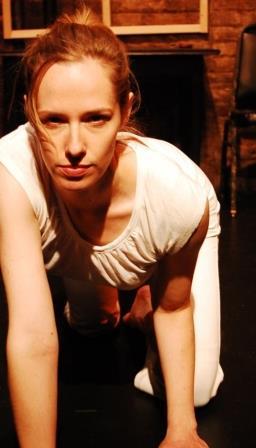 Beautifully directed by Claire Rice, Halloran's 60-minute performance piece is an absolute delight. Whether slithering around her owner's apartment, stalking and destroying household objects on a whim, or portraying the three conflicted women whose interests in each other are more than merely sexual, Halloran delivers a mischievous performance filled with feline feistiness, a dictionary listing of the various types of dykes, direct challenges to Jesus, and some bitchy moments of betrayal. 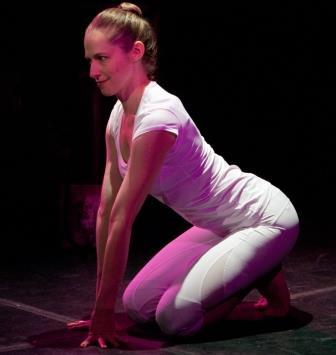 Cat lovers will love Pussy. Lesbians will love Pussy. If you're a fan of the Simon's Cat series of animated shorts on YouTube and have yearned to see how a jealous cat might undermine a lesbian relationship, then you're in dire need of some Pussy. Ordinary theatregoers will find themselves laughing at more pussy jokes than they remember hearing from Mrs. Slocombe on Are You Being Served?

Last, but not least, Halloran's writing is exceptional. As Leslie calmly explains to her priest: "It is not clear in the Bible what Jesus thinks about lesbians, but it is pretty clear that he is okay with prostitutes."

Over the years, John Fisher has developed a reputation for being able to create a spectacle on an extremely tight budget. The artistic director of Theatre Rhinoceros recently wrote, produced, and performed in the world premiere of The Battle of Midway! Live! Onstage! at A.C.T.'s Costume Shop (a black box theater on Market Street). With music by Don Seaver (who accompanied the show on piano), this was one of the most delightfully tacky musicals to come down the pike in a long, long time.

If you've ever clapped your hands to show Tinker Bell that you believe in fairies, Fisher's latest opus could be just your kind of thing. As he explains in his production note:

"The Battle of Midway! Live! Onstage! is a work of fiction based on fact. It is also a musical comedy. As history, it therefore should be taken with a bucket of salt. For the facts, the best books on the subject are Dan Van der Vat's The Pacific Campaign, Walter Lord's Incredible Victory: The Battle of Midway, and Jonathan Parshall and Anthony Tully's Shattered Sword: The Untold Story of the Battle of Midway. And then there are the movies with Charlton Heston and John Wayne. I grew up loving all those loud war movies and ended up a pacificist, so what I'm left with is a love for all the campy posturing of the old flicks. This is my tribute to that genre. And I do think war is bad." 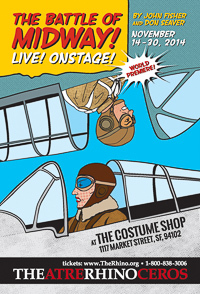 Poster art for The Battle of Midway: Live! Onstage!

The show begins as Donald Currie totters out before the audience clad in a bathrobe and clutching a tiny American flag in one hand as he leans on his walker. Reminding the audience that, back in the good old days, people fought in a different kind of war -- the kind where you had respect for your enemy -- he barks: "Pay attention, you young whippersnappers!"

Currie later appears in drag as Martha -- the wife of Admiral Fletch (John Fisher) -- and dressed in a hilariously cheap costume as Midway Island. 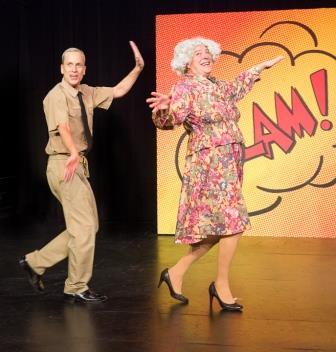 In between his constant admonishments warning the stuttering Admiral Fletch not to fuck things up, Currie's Admiral Nim (short for Nimitz) continually locks horns with the sexy and successful young Admiral Bull (Justin Lucas), who has a tendency to rip off his shirt and start dancing or performing one-armed push-ups. 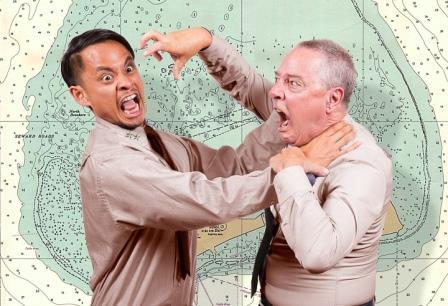 When he's not flying a Navy bomber or impersonating a board member of a gay nonprofit theatre, Lucas also appears in drag as Michiko (a Japanese girl in love with one of Emperor Hirohito's brave pilots). At various points in the evening, he also appears with Katina Letheule as two snotty arts patrons. Yes, Virginia, it's that kind of a show! 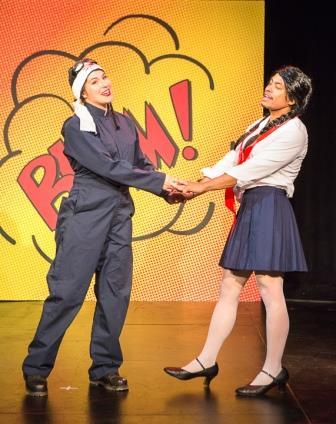 In between tossing barbs at foundations that are stingy with arts grants, the "other" gay theatre company down the street, and mocking his own reputation within San Francisco's arts community as a character named "Jack," Fisher is performing energetically as an incompetent Navy admiral. He is aided immensely by JD Scalzo in a variety of supporting roles. Special kudos go to props designer Gilbert Johnson (whose inventiveness has given the company a way to sink cardboard cutouts of ships using pencils to represent torpedoes).

Lacking an official choreographer, Fisher's low-budget 2-1/2 hour mini-extravaganza wages air-and-sea battles that reflect the fevered imagination of a nine-year-old boy who sat in front of his family's television watching Victory at Sea a few too many times. So let's be brutally honest: When a musical comedy features a song entitled "Rosie The Riveter Was A Big Dyke," an audience is fully justified in saying "OMG, That's SO Gay!" 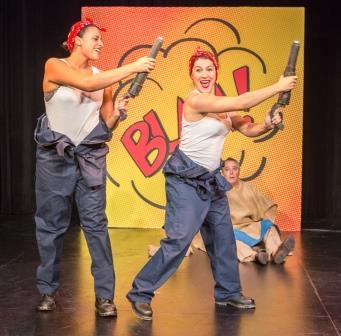