As soon as the resident said it, he knew he'd made a mistake.

In a few months it'll be a year, but I still remember the look on his face. The ER doctor poked his head in the door. He asked what the ophthalmology resident on call thought it was. Carcinoma, he said. So off-hand. So flippant. He just tossed it out there: Cancer.

When the resident turned back to me, he realized immediately I knew what he'd said. I was two semesters deep in nursing school and my family pedigree guaranteed a slather of sunscreen as soon as we exited the womb, and a yearly mole check after age 4. He backpedaled around the room about chemotherapy eye drops and squamous cells, but he was wrong. It wasn't squamous. It was melanoma. And it was on my eye. And it was bleeding. I looked across the room at my husband and all I could think was...

I used to pray every night. Starting in the 4th grade, every night before bed I slipped my rosary over my head and slept with it on. The dreams I had were terrible. I've always had a ton of nervous energy, and at night it led to dreams of running, and falling, and fighting for my life. I prayed not to dream. I asked God to take them all away. A good dream wasn't worth a possible bad one. Not to me. Not in the vulnerable abyss that was sleep.

Each evening as I crawled into bed, I forced the creativity and imagination out of my system. At the time it didn't feel tragic, but looking back now, I know it was. Eventually, relegating myself to the real world failed me, too. As my reality worsened, the only comfort I had was that someone up there was watching. HE wasn't just going to keep letting things happen. HE saw what I saw and I wasn't crazy. HE was there and I felt HIM as he pulled me closer.

I prayed nightly through my early twenties. Every night the same structure. A Catholic prayer to my Guardian Angel bled into a recitation of names of people I cared about, followed by a desperate plea that they lived well into their eighties or at least longer than I did. It was a ritual, a mantra, and always a comfort.

When I still went to a church that did Communion, every walk back to my seat felt transcendent. I could feel HIM pull me to the alter and I always felt that I floated the first few steps back. It was a short burst of an out-of-body experience that usually ended about the time I settled into the pew and back down to Earth. Even then, in the short seconds after, I could tell HE was there. That for just a minute I'd found HIM.

I don't remember when I stopped praying nightly. It wasn't a conscious decision. It was just something I got away from. As I took control of my life, I leaned on my faith less. After I lost my grandparents, including them in my nightly prayer began to feel strange and foreign. The words no longer rolled off my tongue and I began to think about what I was saying. Once I started thinking about it, I couldn't do it anymore. It was like riding a bike or dancing: I thought about it, and then I couldn't. I removed myself from the zone. I muddled something innate and natural with the thoughts and doubts of the outside world and that quickly-HE was gone.

I prayed when I got pregnant. I was terrified all the time. For me, for her. I prayed because I was supposed to. I prayed because I wanted to feel the way I had before. I wanted the comfort back, but instead as I recited the words, I felt them echo throughout the universe. They bounced off stars and dissipated into nothing. They felt hollow and it made me angry. And then worse, indifferent.

After she was born, healthy and beautiful, I didn't thank HIM. I thought about why people come back to God. I thought about acquaintances who suddenly "flipped the God switch" after they got married or had a baby. I didn't doubt the way they felt, but I was wary of HIM. What brought them back? It felt more and more like their gratitude was a cover for finally having something they were too afraid to lose.

I joined a prayer group online. I felt the familiar pull when I saw it posted by a friend, but after reading a few of the comments I began to get nervous. Skittish, almost. I could feel the rope tightening and I felt like an imposter. The ladies in the group felt so deeply. They swam in their faith and I couldn't even bring myself to the water's edge. I wasn't angry. I wasn't jealous. I wasn't anything.

Last night I woke up at 3:30 after an hour of sleep. A clownish villain herded me into an enclosure and then chased me from my dream. I sat on the floor of my bathroom and cried. I cried because I'm scared, because I don't know what's coming next. I cried because I miss my daughter when she sleeps, and I can't bear to think of not being here when she wakes up. I cried because 6 months ago I sat on the same spot, and it felt familiar, and the stasis depressed me even more. I felt the demons pressing in, and I cried because they are mine.

I thought maybe HE tried to get me back by giving me the miracle that is my daughter and that I ignored him. And now, like all the well-meaning comforters have said, HE gave me cancer. To pull me back in.

But what kind of God threatens you into compliance? Brings you in with fear? Coaxes you closer with tragedy?

I don't know how long I cried, because bathroom floors are parallel dimensions where time is lost and you can only enter if you're sick or very, very sad.

I thought about my daughter and my husband. About my friend, and the group she started. I thought about timing, and coincidence. I thought about my grandfather, the man who gave me my first rosary. And there on the floor, I felt HIM pull at me again. It was different this time. Like when you add a comma to a sentence and it changes the meaning. HE was pulling again. Whatever HE is. But it didn't feel like a snare. It didn't feel like a trap. It felt like a gentle tug and I started to think that maybe it's just a rope.

Maybe it's always been my choice whether to grab onto it or not. Maybe I don't have to fight it. Maybe I don't even have to climb. Maybe I simply have to hold on. And maybe the reason I still feel a tug is because I never really let go.

Oh, how I've missed YOU. 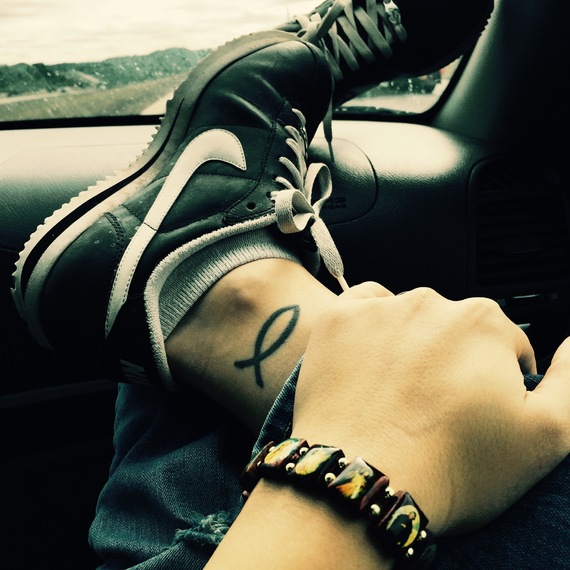