Simon would have been 18 years old this April. I was planning to take him to a strip club and let him buy a pack of cigarettes. But just a few weeks ago, my parents and the vet decided it was Simon's time to go. He wasn't walking right, his appetite was gone, and eventually it became difficult for him to breathe. Our pup, the senior citizen of the canines, was suffering.

At only 24 myself, I barely remember life before Simon. I was 7, my sister 8, when we started to beg our mom for a puppy (which was weird, because I was afraid of dogs). We promised we'd feed him, let him out, clean up after him -- all the things that kids say. But as a single mom of two elementary-schoolers, Super Mom knew that a puppy would be just another thing on her plate. Still, she wanted to make her girls happy, and was just as excited as we were. 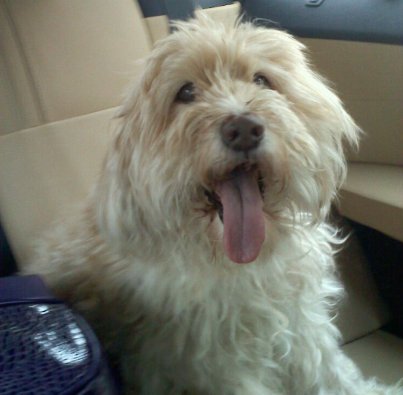 At the time, my mom had been dating a 40-something bachelor for a year -- a year he'd spent trying to figure out how a golf-obsessed single dude could bond with two little girls. (Spoiler alert: he figured it out, she married him.) He dove head first into the world of arts and crafts, tea parties, and nail polish but the one place we could really find common ground, was Simon.

Our insanely energetic puppy kept us entertained and laughing for hours. He could jump super high and catch the tennis ball in his a mouth, a trick we named "Michael Jordan doggy." If you held the tennis ball and swirled it around above his head, Simon would swirl too, a trick we named "Ballerina doggy." For the next 17 years, Simon acted as that neutralizer in our family.

It's often said that a love from a dog is unconditional. Really, it's so much more than that. Everything that could go wrong in a human relationship, never does with a dog. Simon is the only being I'll ever know that has never been mad at me or annoyed with me, and who never got sick of me. My human sister, who I love deeply, has been all of those things. (Understandably, since we're both people.)

Simon never sensed tough family times. No matter which angry words were exchanged, that pup would prance through the middle of an argument, drop his tennis ball, and expect it to be thrown.

Through my teenage angsty, bratty years, Simon was the only one who was always happy to be around me. At the same time, he was the only child who never caused our parents grief (other than peeing inside sometimes....).

My sister and I both eventually left our lil' bro behind when we went to college. But still, he remained that connector (that is, once our mom learned how to send picture messages). And when she did, it was picture after picture of Simon sleeping, eating, in the car, sleeping some more. Every photo of that face (OMG, THAT FACE), would bring me comfort when I needed it.

He was a protector, a playmate, a pillow, he was my brother. I'll love you forever, Simey.

(Seriously... THAT FACE, you can see more of it below.)